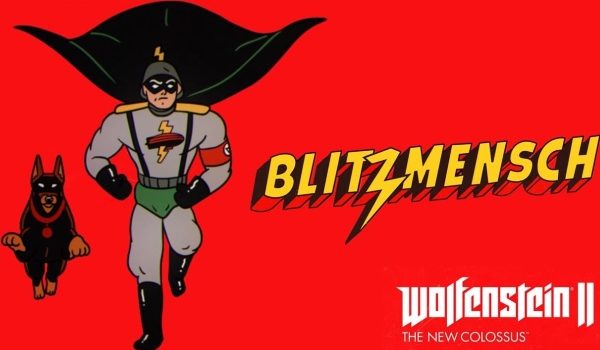 A superhero for the ages? Or the subversion of a heroic American archetype – twisted into putrid propaganda to fit the needs of the nefarious Nazi regime? For BJ Blazkowicz, the answer is easy. Blitzmensch might be masquerading as family-friendly fun, but it won’t fool the resistance, which Blazkowicz is rallying to repel the repulsive Nazis from his homeland. Watch this episode of Blitzmensch, plucked straight from the world of Wolfenstein II: The New Colossus.

Holterdiepolter! It’s official – Blitzmensch is a blast! General Engel’s favorite TV show is getting bigger and better each year! Päng! Blitzmensch and his partner Fräulein Fox save the world from capitalism, communism, and degenerates every day in this amazing show celebrating die Überlegenheit – the superiority – of the Reich and the Aryan race. Ach, nee! Who will be this week’s baddie? The evil Money Grubber? The notorious Proletariat-Man? The vicious Mr. Yankee Monkey? Don’t miss a single episode of Blitzmensch!

Produced in partnership with MachineGames and Bethesda Softworks, these videos will appear throughout the game as part of the world-building in Wolfenstein II. We’ve already released Liesel, Trust in Brother and German… Or Else! Stay tuned for even more videos that’ll give you a glimpse into the world BJ Blazkowicz will be saving from Nazi oppression in The New Colossus.

For more Wolfenstein II: The New Colossus, check out these videos and features: