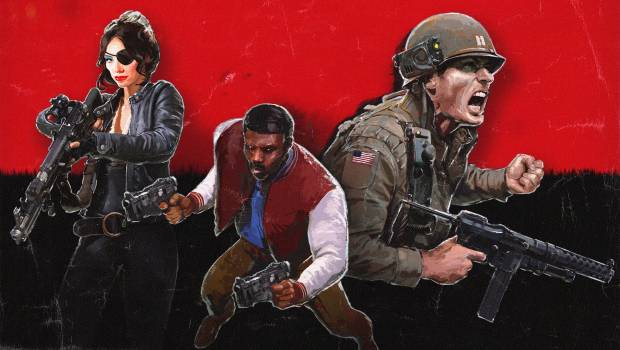 Summary: Episode Zero of the Freedom Chronicles season pass DLC provides a decent taster into the three campy, lighter-hearted pulp war stories MachineGames has in store for us.

Wolfenstein II: The New Colossus‘s meaty, satisfying single-player campaign was its unrelenting brutality against fictional Nazi tyranny, but occasionally the writing took a turn for the wackier, somehow meshing dark comedy and grittiness perfectly. For fans looking for more of these moments, the upcoming content in its three-part Season Pass DLC, The Freedom Chronicles might be right up your alley.

Consisting of three pulpy action war stories doubling down on the power fantasy of being a Nazi killing machine while shifting the overall tone to something much more absurd and outlandish, Episode Zero is an introductory mission which promises more fun post-game distractions when the campaign is done and dusted. While short, the prologue and its amusing comic-book style cutscenes and narration gives a decent taster into what we can expect in post-release support from MachineGames.

The Freedom Chronicles is cleverly presented as an in-game fictional book written by a resistance member to explain away its campier tone and superhero-esque scenarios. Players take on the role of the novel’s three American and British protagonists as they take the fight directly to the Nazi regime in different parts of the world, all possessing their own unique backstories and playstyles derived from from certain abilities possessed by main hero B.J. Blazkowicz. Episode Zero acts as a taster, a brief hour-long introduction into the three heroes so we can get a feel for how they each play before their respective DLC chapter focusing on their story is released. 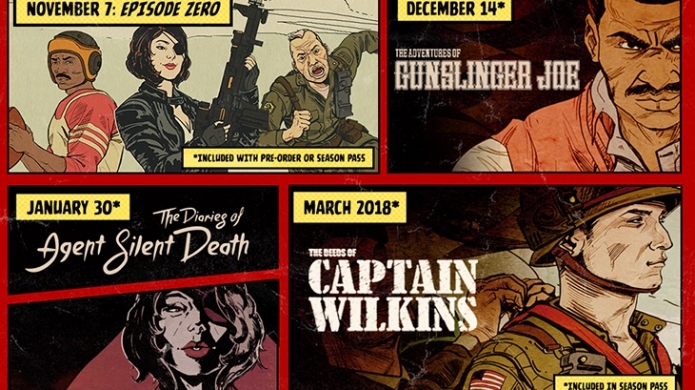 Former all-American football superstar Joseph “Gunslinger Joe” Stallion is the first playable hero in Episode Zero, and players are thrown straight into his underground fight against the abuse of the racist Nazi overlords who have taken over Chicago. The teaser mission puts him on a collision course with an American dentist turned Nazi collaborator named Roderick Metze and involves plenty of Nazi murder by running through brick walls and expertly timed throws using his extensive experience as a quarterback.

While I found the actual underground base setting and enemy encounters of his teaser mission the blandest of the three snippets, the little touches with his killing moves and the narrator’s cheesy emphasis on his Nazi murdering ability being inherently tied to being a bad-ass on the football field was amusing. But the small amount of opportunities to flex these abilities was not enough to differentiate him from B.J., so I’m hoping to find his full mission, The Adventures of Gunslinger Joe is full of more more scenarios involving his ability to wreak havoc through brute force, given it promises Stallion smashing Nazis into outer space, of all things.

Jessica “Agent Silent Death” Valiant is the second hero of Episode Zero and judging by her short teaser mission in Episode Zero, her standalone chapter will appeal most to fans of the stealthier approach in Wolfenstein II. Valiant is the embodiment of the ultimate femme fatale of old-school pulp comic books in both looks and lethality (voiced by Claudia Black of Uncharted fame) and is an American/British OSS secret agent who is trying to stop the Nazi propaganda machine in Hollywood by taking out a film star known to support the Third Reich. Valiant’s main gameplay gimmick is she can contort her petite frame to crawl through impossibly small places – unlike B.J.’s Constrictor Harness ability, Valiant doesn’t lose health while doing so. Time also slows down for a second when Valiant is spotted, giving her a clear advantage in stealth encounters.

Vaiant’s teaser chapter makes great use of these abilities as you silently slice the throats of several Nazi soldiers in a game of cat and mouse while avoiding detection by hiding in cleverly placed crawlspaces and vents – you can go in all guns blazing, but Valiant is much better played stealthily, as intended, and it’s a great break from the louder guns blazing scenarios of the main campaign, which often was much more facilitated than the smarter, quieter approach. The Hollywood television set the mission takes place in is also much more interesting and unique than Stallion’s generic Nazi base snippet, and coupled with her playstyle is easily the strongest case for buying into the Season Pass.

The third and final hero, Captain Wilkins is a hard-ass soldier trying to stop a Nazi superweapon in Alaska from being deployed. His chapter was the least interesting in terms of story, but the firefights were more than entertaining as they are built around his ability to jump and stomp on Nazis with stilt shoes – and while the ability is lifted from the main game, there’s much more opportunities to use it here.

The Operation Black Sun teased at in the introduction of Wilkins’ chapter is somewhat intriguing for fans of 2009’s Wolfenstein given the main operation B.J. tried to thwart in that game was of the same name. Whether it’s meant to be a subtle reference to past games, or a re-imagining of that story similar to how 2015’s Wolfenstein: The Old Blood re-told the events of Return to Castle Wolfenstein remains to be seen – but I hope it’s the latter, as there’s not much that made Wilkins more interesting than B.J. in the teaser prologue, both in gameplay or motivations. Of course, it’s early days.

Wolfenstein II: The Freedom Chronicles promises three distinct and pulpy action war stories completely separate from B.J. Blazcowicz’s achievements and judging from the brief teaser snippets Episode Zero gives us, at least one of them – Agent Silent Death – looks extremely promising. Gunslinger Joe and Captain Wilkins’s chapters were let down by generic Nazi base environments, but their individual background stories and motivations sound interesting enough that I hope their standalone chapters will capitalise on said intriguing premises – and their unique fighting abilities – properly.

The campy comic-book slideshows and narration for The Freedom Chronicles is a refreshing shift from the oppressive grittiness of the main story. As a side distraction or post-game endeavour, they could be worth it for hardcore Wolfenstein fans – but the prologue is honestly too brief to confidently recommend jumping in immediately at the $37.95 price-point.

If you have pre-ordered the base game before release, you can already test out Episode Zero without getting the Season Pass first – for everyone else, we advise waiting for our full review on the first standalone chapter, The Adventures of Gunslinger Joe, before making a full purchase.