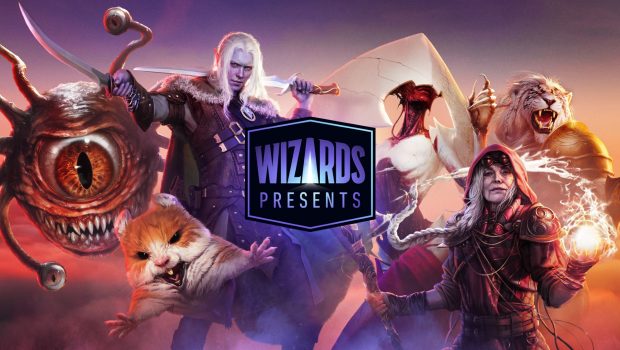 Wizards of the Coast Reveals Exciting Lineup for Dungeons & Dragons and Magic: The Gathering

Wizards of the Coast, a gaming division of Hasbro (NASDAQ: HAS), today announced a lineup of innovative releases for later this year and beyond during their direct‐to‐ fan virtual event, Wizards Presents. These initiatives enhance Hasbro’s $2.1 billion games portfolio for players of all ages, which include iconic fantasy brands Magic: The Gathering and Dungeons & Dragons.

Hosts Jimmy Wong, Ginny Di, and Sydnee Goodman showed off exciting fantasy storytelling products for use at the table, in the game store, and digitally online, cementing Wizards’ leadership in the fantasy gaming category and building on the company’s continued success within Hasbro’s family of brands. Watch the entire video presentation of Wizards Presents on YouTube on our Dungeons & Dragons and Magic: The Gathering channels and on our Twitch channels(twitch.tv/magic and twitch.tv/dnd) for details and commentary from the creative product designers.

“Wizards Presents” the following products and initiatives coming later this year, in 2023, and beyond:

Playtesting for One D&D starts today! One D&D is the codename for the next generation of Dungeons & Dragons that brings together updated rules, backwards compatible with 5th Edition, D&D Beyond as the platform for your D&D experience, and an early‐in‐development D&D digital play experience that will offer players and Dungeon Masters full immersion and rich 3D creation tools. Head to DnDBeyond.com today to sign up to join the public playtests for One D&D.

Following the acquisition of the easy‐to‐use digital toolset of D&D Beyond earlier this year, Dungeons & Dragons is excited to offer bundles of physical and digital content to fans on D&D Beyond with Dragonlance: Shadow of the Dragon Queen. Preorder now at dndstore.wizards.com to get early access to the adventure on D&D Beyond early on Nov. 22, 2022.

Everyone loves Drizzt! D&D is celebrating the drow hero’s 35th anniversary with new covers of all the Legend of Drizzt novels by R.A. Salvatore. The Legend of Drizzt Visual Dictionary will chronicle lore, creatures, weapons, enemies, and allies in one tome perfect for gift‐giving season. And to take the Legend in new directions, a Drizzt Family webcomic will debut featuring Brie, the tween daughter of Drizzt and Cattie‐Brie, “borrowing” her father’s sword Twinkle to prove she is a heroic force just like her forebears.

Wizards of the Coast revealed upcoming products in its Universes Beyond product line, a way for fans to play Magic: The Gathering beyond Magic’s planes with cards representing iconic fictional settings and characters in pop culture.

Fans got a first glimpse at details for the latest entry in Universes Beyond, Warhammer 40,000. In addition to four commander decks, four Sol Rings are themed after each faction representing The Imperium of Man, Tyranids, Necrons, and Chaos. The cards in the collector’s edition of each commander deck have a new Surge Foil treatment.

In Q3 2023, players can journey to Mount Doom with Frodo, Aragorn, and the rest of the Fellowship on their quest to destroy The One Ring in The Lord of the Rings: Tales of Middle‐ earth™ set. Magic designers showed off a sprawling piece of artwork for The Battle of the Pelennor Fields — the greatest battle of the War of the Ring at Minas Tirith—spanning 18 individual cards as part of a booster release that will immerse fans in Middle‐earth. The Lord of the Rings: Tales of Middle‐earth set is also coming to Magic: The Gathering Arena as an Alchemy set later next year.

Magic: The Gathering is joining forces with Doctor Who in a new Universes Beyond collaboration that includes Commander decks, collector boosters, and Secret Lair drops spanning the 60‐year history of the longest running action‐adventure television series in the world.

Magic: The Gathering celebrates its 30th birthday in 2023. The year‐long celebration kicks off this year and includes the Magic 30 event taking place at Las Vegas’ EXPO at World Market

Later this year, players will return to where it all started in Dominaria United. Home to the first Magic set that was released in 1993, and the centerpiece of storytelling for the first decade, Dominaria is the core of Magic’s multiverse. Dominarians are pitted against the Phyrexians in the kickoff to an epic four‐set story arc. Dominaria United releases on Sept. 9, but fans can preorder now.

To round out the inaugural Wizards Presents, Wizards of the Coast unveiled their upcoming premier Magic: The Gathering set releases coming in 2023. The Phyrexia story arc continues with Brothers’ War, releasing in November, followed by Phyrexia: All Will Be One, releasing in Q1 2023, and wrapping up with March of the Machine, a conclusion to the story, releasing in Q2 2023. March of the Machine: The Aftermath, also releasing in Q2 2023, ties up loose ends from March of the Machine and explores the fundamental changes that have taken place in Magic’s Multiverse. In Q3 2023, players will return to Eldraine, a fan favourite plane that draws inspiration from classic fairy tales with Wilds of Eldraine. In Q4 2023, Lost Caverns of Ixalan will finish the year with Pirates, Dinosaurs, and Vampires vying for dominance.

Since 1993, Magic: The Gathering has thrilled players and card collectors. With more than 50 million fans to date, Magic is a worldwide phenomenon in more than 150 countries.

Dungeons & Dragons continues to innovate the tabletop and digital roleplaying genre with the next evolution of core rules to enhance players’ imaginations and enjoyment of the game. Crossover opportunities with the film and book industries can only add to the more than 50 million people who play D&D, fast approaching its 50‐year anniversary.

For more information about everything that was revealed in Wizards Presents, please visit https://magic.wizards.com/en/articles/archive/news/next‐year‐of‐magic‐wizards‐presents‐2022‐08‐ 18.