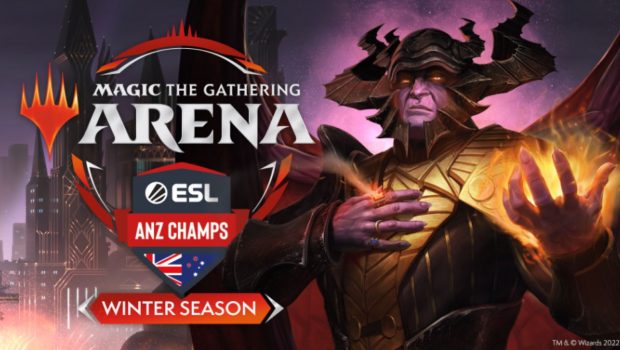 Following the recent announcement of the return of the Pro Tour, Wizards of the Coast, in partnership with renowned esports company ESL Australia, is providing even more local opportunities to play competitive Magic: The Gathering (MTG) in the ANZ region, with the return of the MTG Arena ESL ANZ Champs tournament announced today.

The Winter season of MTG Arena ESL ANZ Champs is the second series of local MTG Arena esports, beginning 7 May with four Qualifier weekends and culminating in the Season Finals on 26 June. As with the previous season, the tournament will feature a range of monetary, and physical prizes. There will also be opportunities to win TCG prizes through engaging with social content and the livestreams.

Each Qualifier will have up to seven rounds of Swiss Stage on the Saturday followed by a cut to Top 8. The Top 2 players at the end of a single elimination bracket on Sunday will qualify for the Season Finals. If a player has already qualified for the Season Finals, their place will be passed down to the next eligible player. TCG prizes are up for grabs at each round and already qualified players are encouraged to play in multiple events!

Prizing structure for the Qualifiers is as follows:

A total of AU $2,500 will be distributed to major placements throughout the tournament. The prizing structure for tournament placements is:

Players can sign up to the open qualifiers via the ESL play platform here. A video explaining how to use the platform and steps for signing up can be viewed here.

Open Qualifier finals and Season Final events will be broadcast on the ESL Australia Twitch channel. These broadcasts will be run using TV quality broadcast equipment and operated by an expert broadcast team. ESL staff and commentators familiar with the MTG scene will host the tournaments to keep viewers entertained and informed of tournament and game progress. The official Magic Twitch channel will also host these broadcasts.

Please let us know if you’re interested in featuring this and if you need more information (assets are attached below). We’ll be in touch shortly to determine your interest!