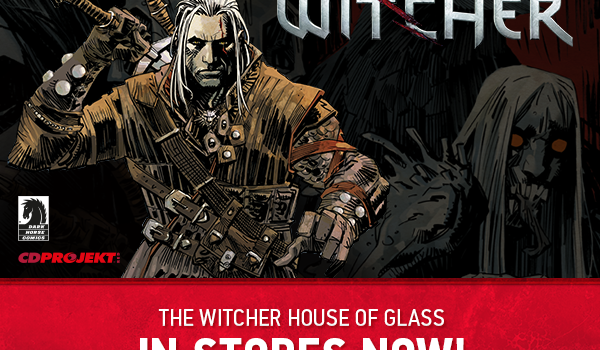 The Witcher: House of Glass #1 of 5 Comic Book Released Today!

CD Projekt RED, the developer behind the critically acclaimed Witcher franchise, and Dark Horse Comics, one of the global leaders in comic book publishing, are thrilled to announce today’s release of The Witcher: House of Glass, a new and exciting addition to the vast and action packed universe of monster hunter Geralt of Rivia.

Created by Paul Tobin, with art by Joe Querio and covers by Dave Johnson, The Witcher House of Glass extends the universe known from critically acclaimed video games and books, and delivers a compelling tale of adventure, horror and mystery.

Travelling near the edge of the Black Forest, in the land of the Angren, witcher Geralt meets a widowed man whose dead and murderous wife resides in an eerie mansion known as the House of Glass. With its endless rooms and horror around every corner, Geralt will have to use all his witcher prowess to solve the manor’s mystery and survive.

The Witcher: House of Glass is available as a digital download, via the Dark Horse iOS and Android application, as well as online, on the Dark Horse Digital comic book store.

To give readers a sneak peek of the adventure to come, together with Dark Horse Comics, the studio published four initial pages directly from the comic book. See them here, here, here and here.