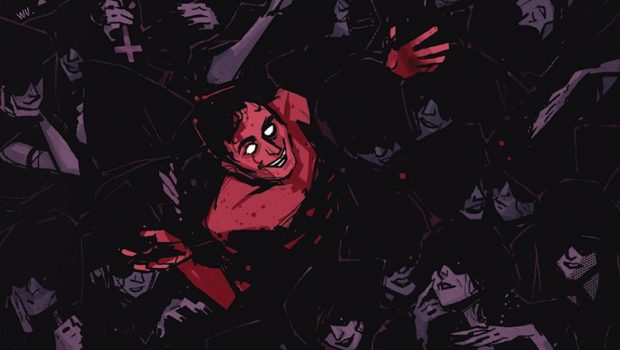 Summary: Overall, this is a unique horror story that is suspenseful, menacing and downright terrifying. I want more!

This harrowing game of cat and mouse is coming to an end, as Christine refuses to run from the cultists anymore, deciding to stand her ground and fight instead. The hunters becomes the hunted, as a cunning ploy is hatched that will take the Satanists by surprise with devastating results. This is a battle of life and death, where we discover who will survive and who will die! 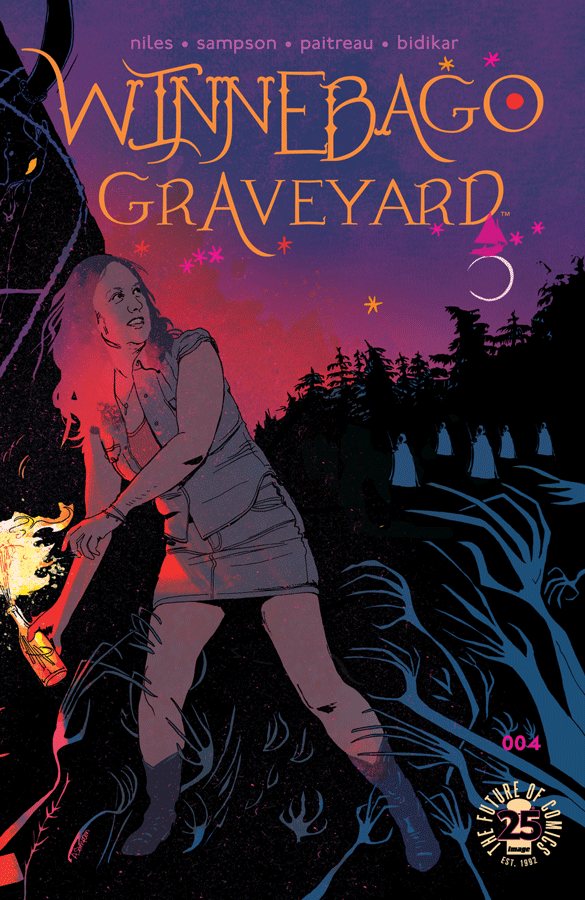 This issue begins with Bobby and Christine embracing Dan, who is mortally wounded after having his entire face ripped off from the demon. The young boy, Deacon, who is trying to help them escape, urges them to make haste as it’s not safe to linger. Christine, however, refuses to run and instead makes the decision to stand her ground and fight back. Deacon hatches a cunning plan that involves them skinning the demon, and wearing it as a kind of vile disguise. Back in town, the hooded cultists are still searching for them, and a gathering is arranged to rally up their forces and incite rage and fear within them. Their leader stirs them into a frenzy, saying they have infiltrated their town, and threaten their existence. The trap is set, and with the whole town now looking for them, Christine and the boys wait so that they may take them by surprise. The tension is high as the cultists creep closer, unbeknownst to the imminent ambush that is about to hit, unleashing a fiery inferno that threatens to engulf the entire town, and themselves included. 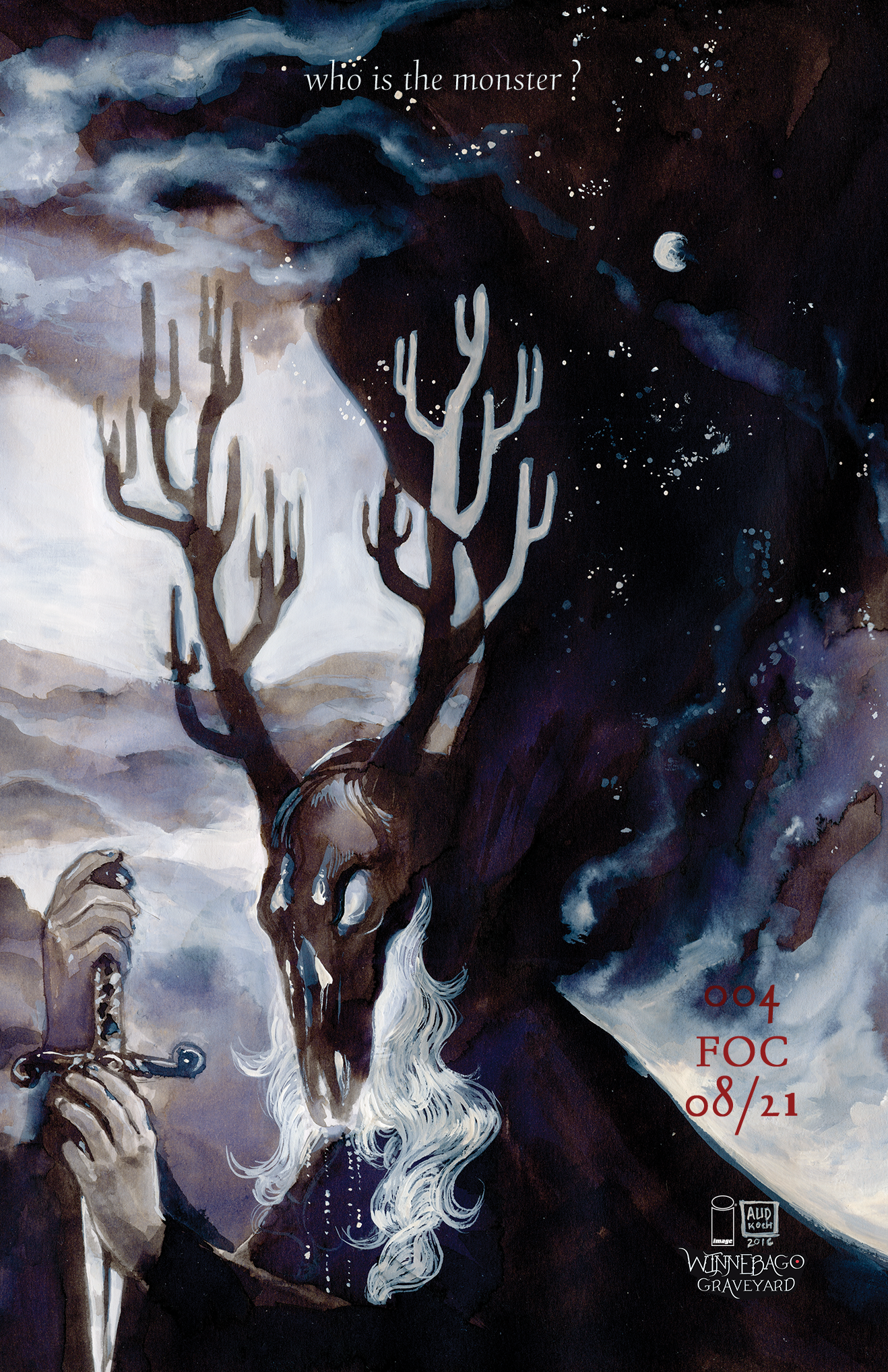 Well this was an intense and thrilling conclusion to this tale. There is a sense of desperation in the air coming from both sides, as Christine fights for her family’s survival, and the cultists desperately try and hunt them down. We see an interesting dynamic shift occur, which is both unexpected and compelling, bringing a new tone to the story. This is such an engaging story, and I’ve found that it has been able to maintain it’s exciting and edgy vibe. Never did I find the story to be slow or tedious, instead each issue brought a thrilling new chapter to this horrifying tale. Steve Niles did an excellent job at capturing an eerie and menacing mood that gradually intensified as the story progressed. I also enjoyed the unexpected plot developments throughout this series, from the supernatural dark magic, to Dan’s gruesome demise. It all comes together to create a tight and cohesive narrative, that is both gripping and downright horrific. Also, in the back of this issue there is an interesting essay, by Casey Gilley, about Satanism in the world as we know it. 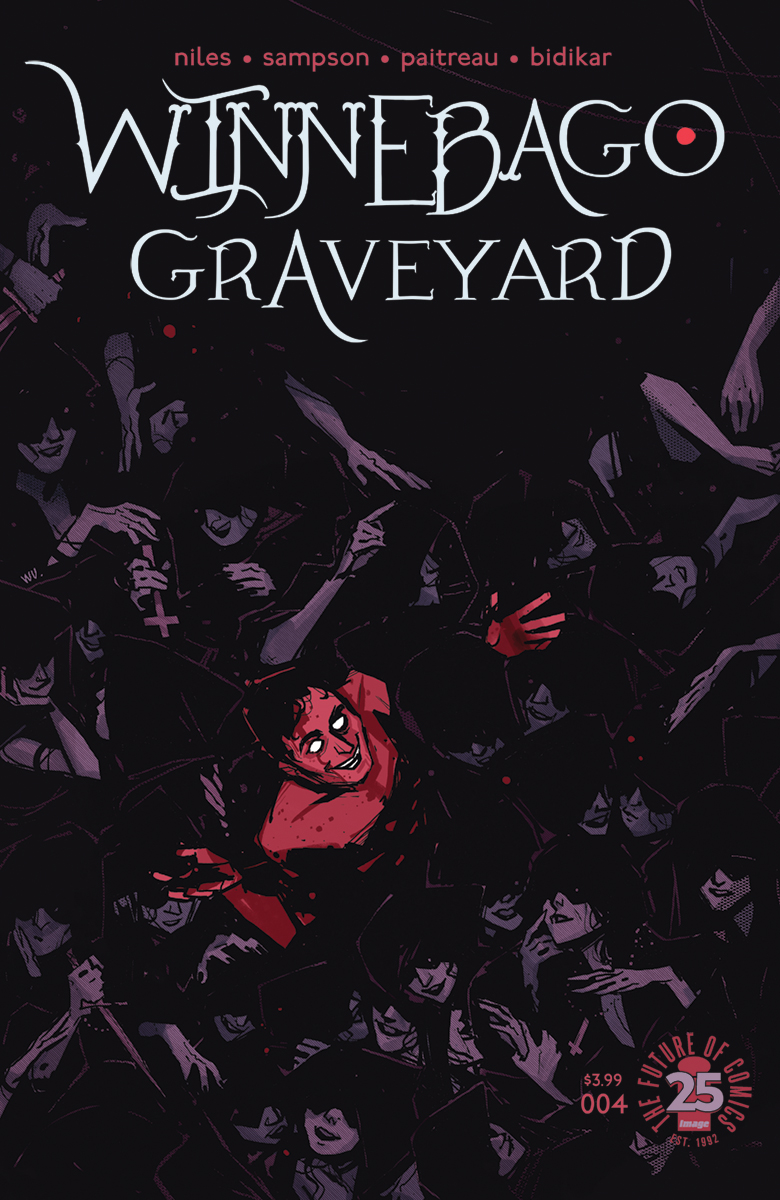 I cannot praise Alison Sampson’s art enough. I absolutely LOVE it! She perfectly captures the gritty and fierce aspects of this story, never shying away from giving us intensely graphic details of gore and guts. Contrasting to this are the pretty aspects of Sampson’s art, ranging from the sprawling scenic landscapes to the smaller intricate details, like the curling flames and the wispy clouds. There is also an intensity to her art, that is perfectly captured through the haunting expressions on people’s faces, whether it be a malicious sneer, a twisted scream or a face frozen in despair. It is during these highly emotional scenes that I find my eye drawn to these expressions, allowing me to fully grasp the gravity of the emotions that they are experiencing. The colouring, by Stephane Paitreau, is moody and atmospheric, possessing a striking quality that works to heighten the overall tone of the story. Bright splashes of colour along with deep and dark tones foster an uneasy vibe that is ominous and threatening. I particularly love the intensity of the flames, and the vibrant glowing ambiance that the torches create.

This was such an excellent and climactic conclusion to this dark and twisted tale. Steve Niles delivered us a finale that is both exciting and compelling, whilst Alison Sampson’s art offers equal amounts of realistic gore and stunning details. Overall, this is a unique horror story that is suspenseful, menacing and downright terrifying. I want more!