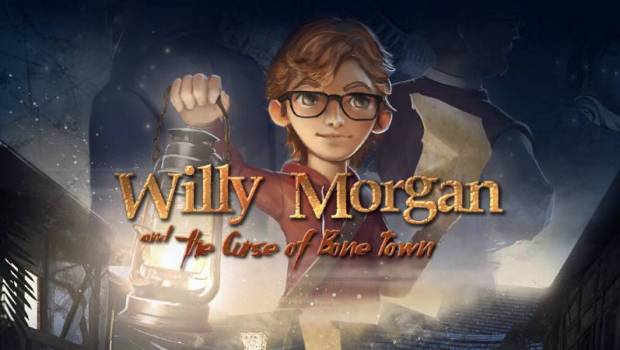 Willy Morgan: And the curse of Bone town PC Review

It is late in the day; you are feeling kind of precious and need something to do with yourself. It is time to grab onto your favourite peripheral and play with your Willy, Morgan that is. Enter the exciting narrative of Willy Morgan, a young teenage boy whom lost his father exactly ten years ago to the day. Nobody knows what happened to Henry Morgan; he just vanished one day in Bone town, never to be seen again.

Bone town is one of those towns where all the inhabitants have historical ancestors who founded the town, and none are better known then Captain Kidd and the members of his crew. What is perhaps even more famous though is Captain Kidd’s missing treasure. 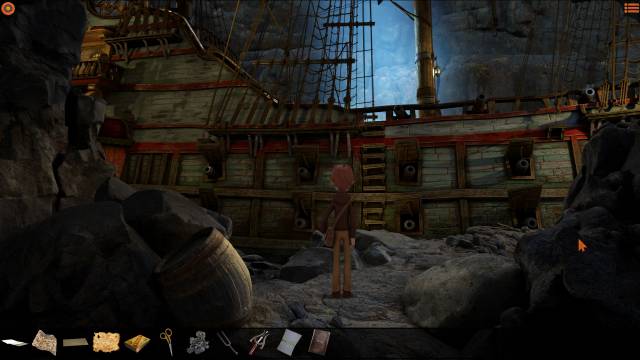 The story begins in Willy’s bedroom, where a quick opening monologue reveals that a letter sent from his father ten years ago arrives at his home and Willy is now tasked with glorious purpose. Willy also offers you a quick and pleasant tutorial to get acquainted with the game controls, and then you are all set to go. 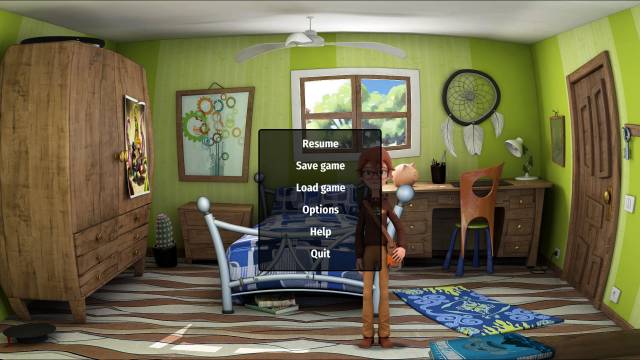 The game style is a point and click narrative driven role playing adventure where you must collect things in the environment and solve problems using those key objects to uncover further aspects of the story and advance further into the game. The controls are the tried and true single click to touch/activate and right click to look or inspect. The inventory is obtained by a scroll wheel up and the same controls apply, and objects can sometimes be merged to create a single item. 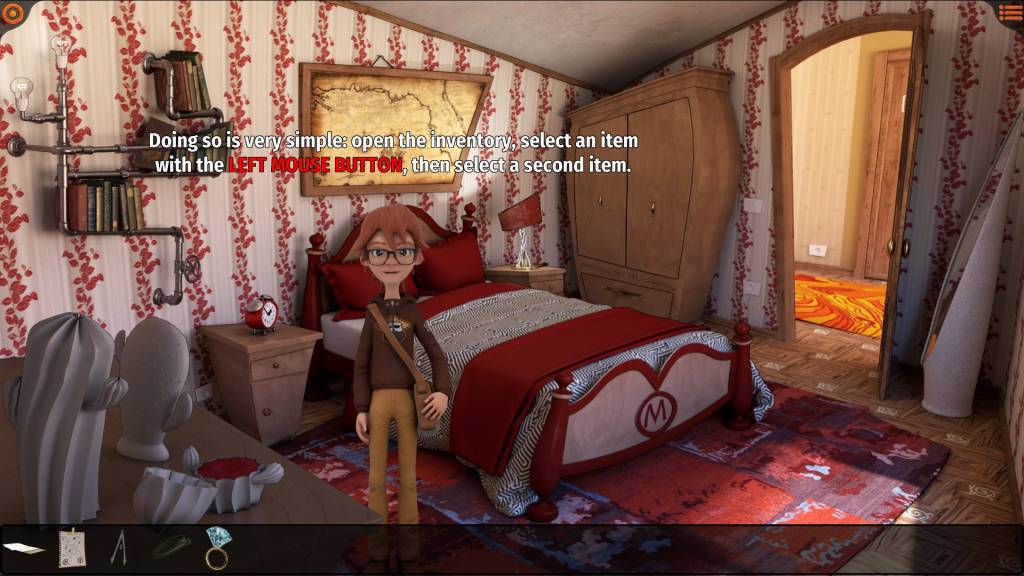 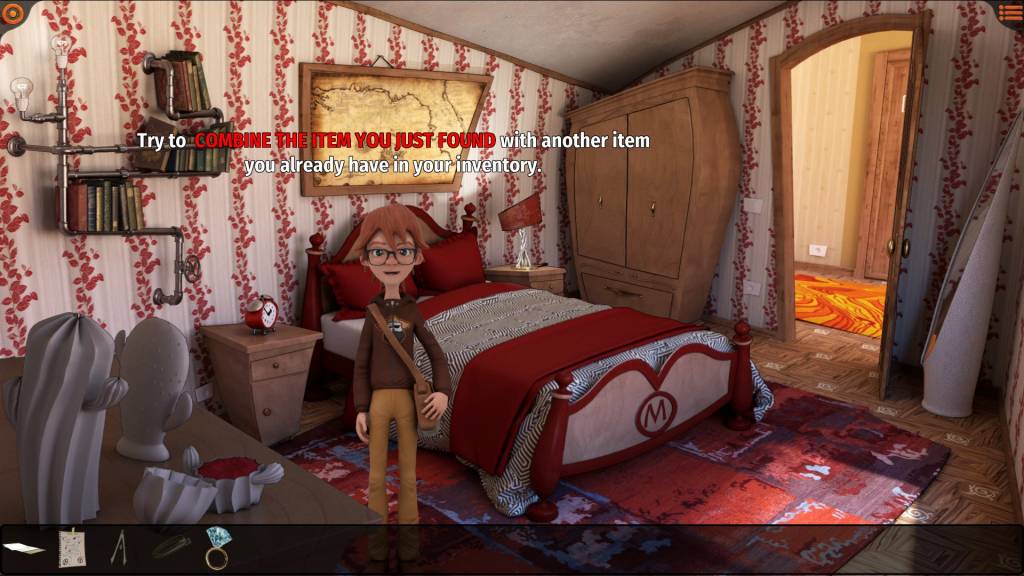 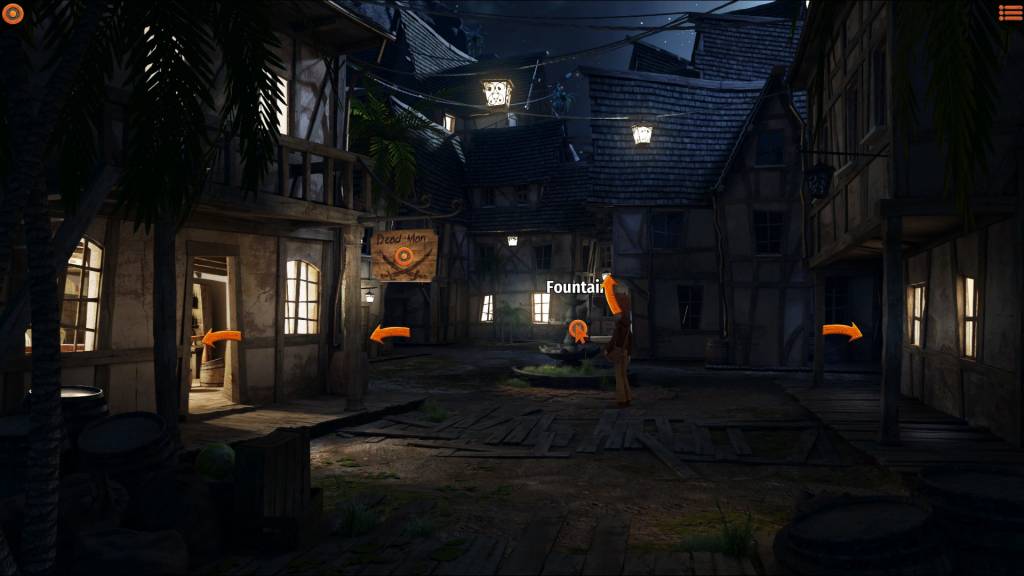 Throughout the story and progression through solving the problems; and with few exceptions it is usually more or less clear on what your objective is, however the journey is getting from A to C by figuring out how to achieve this elusive step B.

Often Willy will have a little retort or funny comment if you try to make the wrong choice with objects, such as the matches. The most funniest response from Willy is at the beginning of the game is in the bathroom. 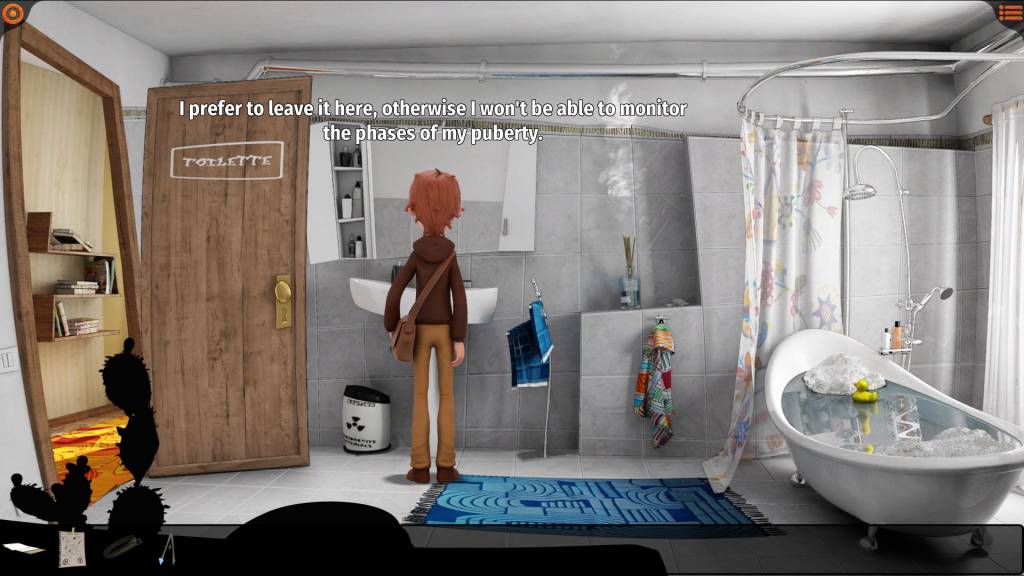 Willy tries to take the mirror

He also has some really funny monologue moments and exchanges with the NPC’s, especially the nerdy gamer/bartender. 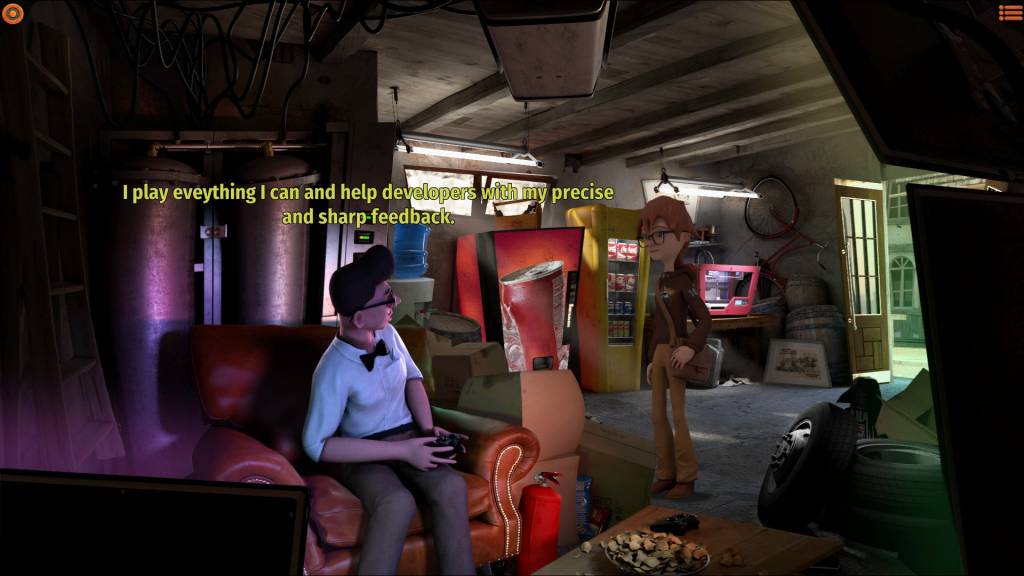 What is really welcome to see in this game is the map system that gets introduced after your first night in Bone Town. The map enables the player to instantly transport to any known location on the map – a feature that sadly was only discovered half-way through the game. Yes, Oops. But it is an incredible time saver and removes that annoying drudgery of schlepping back and forth just to test your idea, object or interaction at a specific location. Marvelous!

The story itself is perhaps aimed more at younger players but it is still quite enjoyable for all ages, it can be predictable but only in a ‘step ahead’ kind of way, for example the ending where you learn what happened to Willy’s farther, the clues do give it away but you only see them a moment before the curtain is lifted; simply put, it is not a story that is immediately ruined in the opening scene or easily predictable in the who what where when and why of it all. So because of that, this review won’t reveal any further details about the story, you will have to play it to find out.

The graphics and imagery are in a fantasy, cartoon style, where shapes are often irregular, such as square objects not being square, and stretched perspectives etc. It is really wonderful and highly detailed; especially when taking in the details of the buildings and scenery and landscapes. There is a flow and welcoming style to the imagery that is immediately captivating and relaxing to the eye. 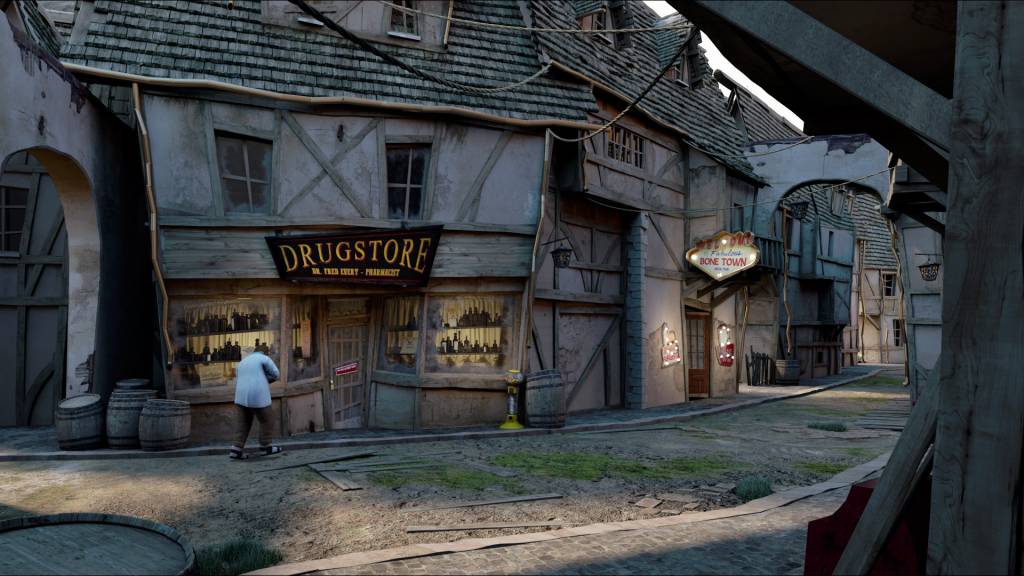 A street in Bone town, the Drug store and the new Pub / Cyber cafe 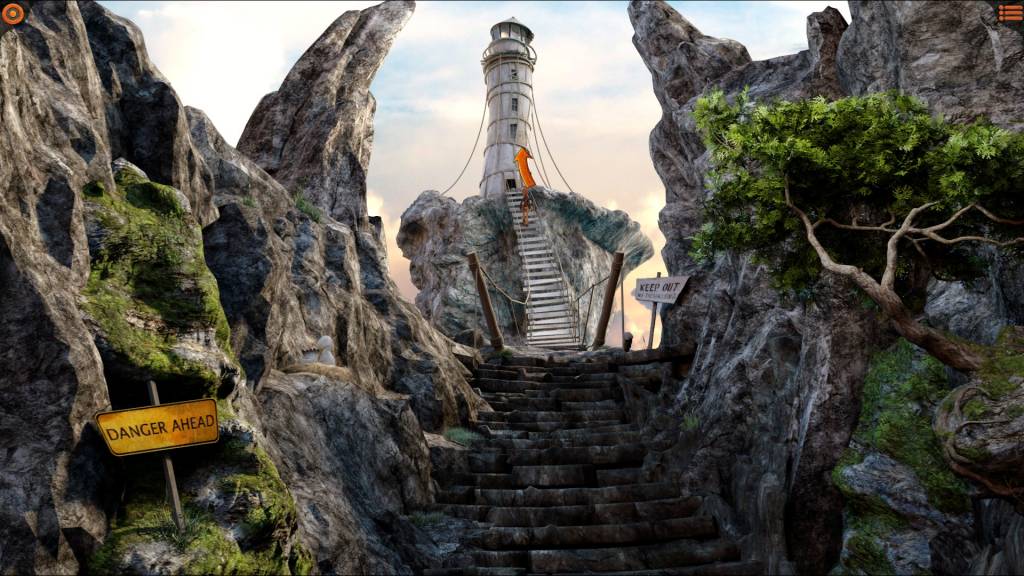 The lighthouse, just a short cross over the perfectly safe bridge!

Willy’s design really gives you a sense of that ‘innocent boy next door’ or that quintessential well-mannered, well-educated obedient upper middle class boy that fits the architype very well. 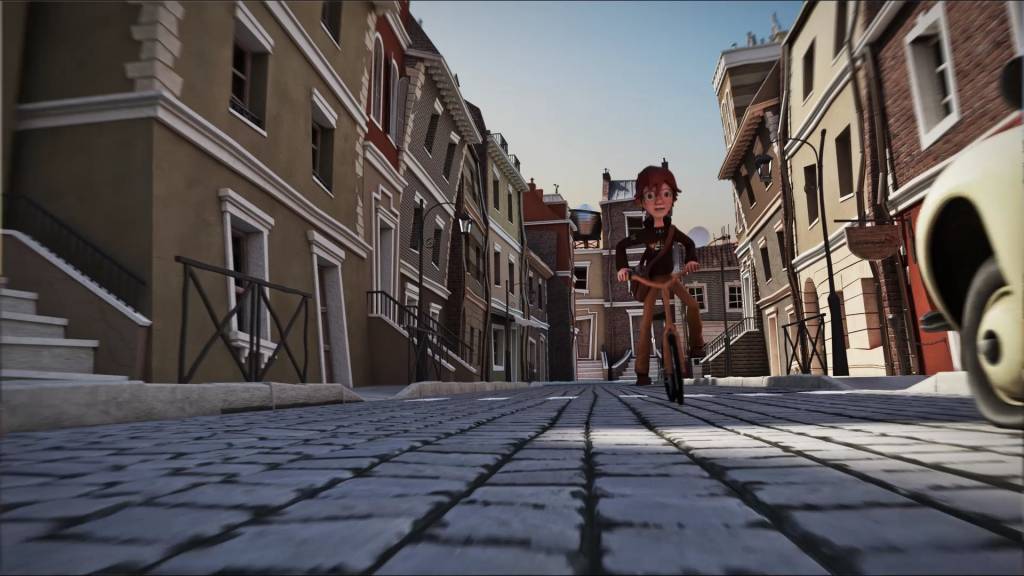 Cinematic cut scene: The journey to Bone Town, Willy on his bike

The voice acting especially for the lead Willy, is expertly done. Some of the characters have interesting voices, such as the bar tender in the hotel, which add some welcome diversity. At times the dialog is quite interesting, as there were moments where the dialog and the subtitles either didn’t match or the dialog seemed to not be the most appropriate fitting words; for example, Willy would sometimes say things that make you question how a boy of his age has that level of maturity or wisdom.

The sound track and music is well done and not distracting, annoying or ill-fitting in any way, however the music does not really shine until the end credits.

Although the review was conducted with the pre-release candidate version, and in this version there were some minor lip sync issues, it was overall a fully polished and enjoyable experience. At the time of finalising this review a fresh update of the game was released which further improved the graphics of scenery and lip sync issues were not noticed towards the latter half of the game.

There are moments where Willy’s dialog seems a bit off, as though English is not the first language of the script writer, which is shown mostly in how some objects are referred to. There are also a few sections of the game where liberties are taken, such as when you need to get horse hair to fix a cello bow, you get the hair but you don’t need rosin; although that is firmly in the nit-picking category.

What sets this game apart is such a captivating and detailed story that is intelligently written, well presented and delivered with light-hearted comical imagery (and occasional unacknowledged thievery). Although the ending did feel a tiny bit rushed, it was absolutely complete without leaving you wanting.

Hands down, this a great game. 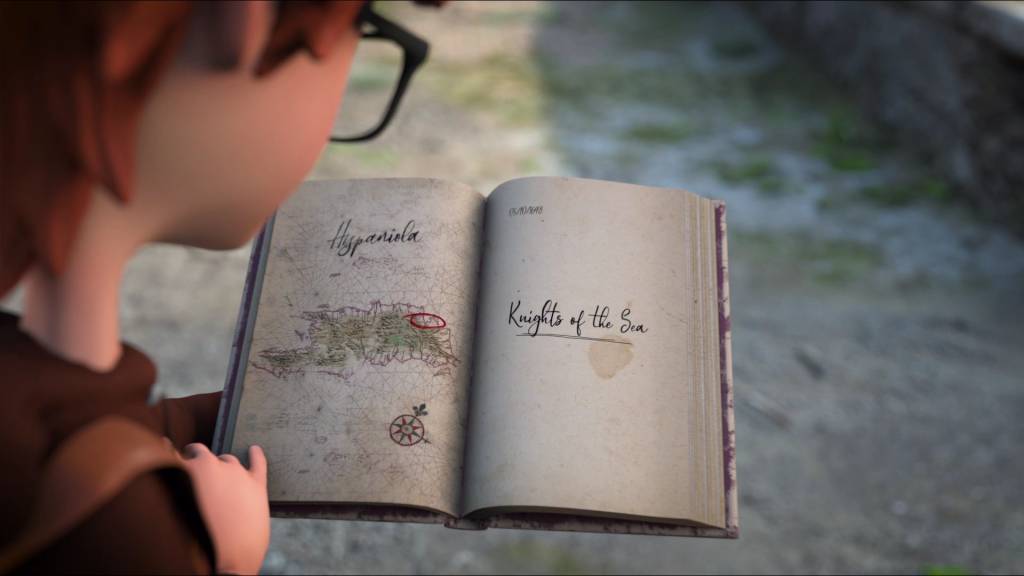 By the time you read this review, the full version should be available from steam.

Summary: An original and captivating story-telling in a well made, well presented format. If you love your RPG narratives, you will love Willy Morgan: The curse of Bone Town.