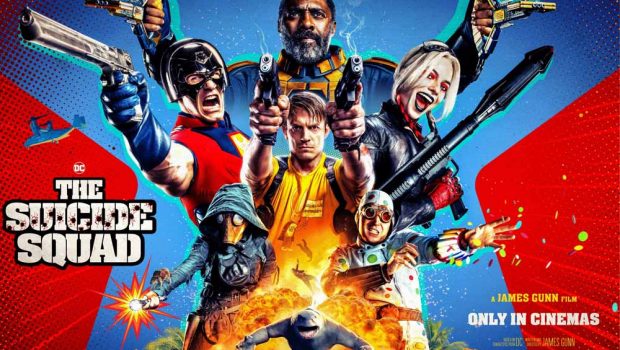 Who’s the most Dangerous Member of the Suicide Squad?

The Suicide Squad is here and they are ready to make an impact. James Gunn’s take on DC’s team of government-controlled supervillains brings the writer/director of Guardians of the Galaxy’s irreverent nature to the DCEU, in a gleefully R-rated film with a ton of mayhem but also some very effective emotional moments.

Fandom’s Eric Goldman recently sat down with Gunn and two of the film’s stars, Joel Kinnaman (“Rick Flag”) and John Cena (“Peacemaker”), about combining those elements, the upcoming Peacemaker HBO Max series, and just who stood out as the most dangerous member of The Suicide Squad…

Both Cena and Kinnaman were quick to reply King Shark, with Kinnaman adding, “I wouldn’t want to f**k with a Great White.” As it turned out though, the actual winner of the reader poll was Margot Robbie’s beloved version of Harley Quinn. 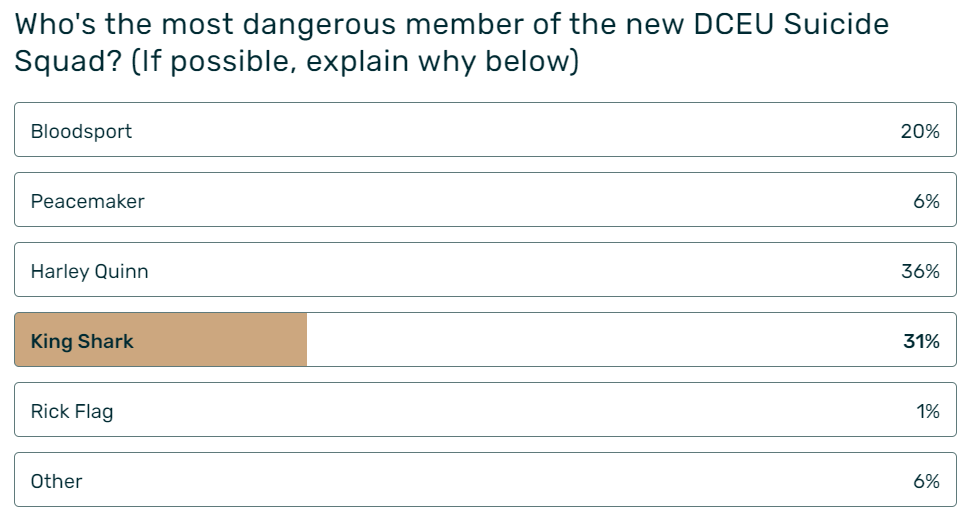 The Suicide Squad is here and they are ready to make an impact. James Gunn’s take on DC’s team of government-controlled supervillains brings the writer/director of Guardians of the Galaxy’s irreverent nature to the DCEU, in a gleefully R-rated film with a ton of mayhem but also some very effective emotional moments.

In the interview with Fandom, Eric spoke to Gunn and two of the film’s stars, Joel Kinnaman (“Rick Flag”) and John Cena (“Peacemaker”), about combining those elements, the upcoming Peacemaker HBO Max series, and just who stood out as the most dangerous member of The Suicide Squad…

There are a ton of Task Force X team members in The Suicide Squad, including the likes of Blackguard, Captain Boomerang, Mongal, Savant, Javelin, and T.D.K. but among this very motley crew, who is the most dangerous? We asked the community at the DCEU Wiki just that, and then asked The Suicide Squad folks who they thought won our poll.

Both Cena and Kinnaman were quick to reply King Shark, with Kinnaman adding, “I wouldn’t want to f**k with a Great White.” As it turned out though, the actual winner of our poll was Margot Robbie’s beloved version of Harley Quinn.

Wrote Lola Lees, of choosing Harley, “She genuinely enjoys f**king people up, it’s a game… She has no fear and she uses multiple ways (not just fighting), such as manipulation and mind games to beat her adversaries. Primalrealm wrote their choice was, “Harley Quinn for her unpredictability and fighting prowess. None of the others are bulletproof or invulnerable to blunt force trauma. And Harley will do both with charisma.”

When we informed Kinnaman and Cena that Harley had won, but that King Shark had in fact placed second in our poll, Cena quickly deadpanned, “It seems like according to the DC Universe, King Shark is a big number two.”

There’s no doubt King Shark is dangerous though of course, and regarding how their characters felt having him on the team, Kinnaman said, “They appreciate him and his power. But you know, it would be really unfortunate if he would eat the rest of the team, so you’ve got to keep an eye on him. It’s like a very naughty dog.” Or as ThatGuyNamedJoe put it on the DCEU Wiki, “King Shark is a shark that can walk on land and eat you. I wouldn’t want to be on his bad side.”

Gunn meanwhile thought Idris Elba’s highly trained Bloodsport might have won the poll (he actually came in third, so still pretty high up!), but did add, “As you see the movie, you understand the answer is probably Polka-Dot Man and Ratcatcher 2 are the two most powerful.”

At least a couple of the fans on the DCEU Wiki had some guesses on that front even before seeing the movie, with Johan Ingebäck writing “I have a feeling that Polka-Dot Man will be the most dangerous” while Apothacarian Jones said, “It’s a toss-up between Ratcatcher and Polka-Dot Man. Ratcatcher controls hordes of rats to do her bidding. Some of the others may have strength or fighting skills but she can overwhelm them with sheer numbers. Polka-Dot Man is said to be the craziest. He is also hoping to die and that can make someone very dangerous. The clips of his powers being used show him to be fairly dangerous.”

The Suicide Squad is a very R-rated film, filled with graphic violence and gore, nudity, and many funny and shocking moments. But it also has some notably heartfelt scenes and character beats, in the manner Gunn referred to with Polka-Dot Man.

Asked about working on a film that has so many different aspects, Cena said, “It’s fun. It’s fun because you’re nervous, because it is pretty tricky and it’s a risk. And I admire that. If you don’t get complacent, you don’t get comfortable. I’m eagerly anticipating audiences to see The Suicide Squad for that very reason, because nobody’s ready to see it but everybody needs it. That makes it exciting. And the uncertainty of if it’s gonna work or not also makes it exciting. I believe in the film. It’s beautiful. But it is a big swing and does take some bold risks and I like that.”

Said Kinnaman, “When I read the script, I was laughing on every page, basically. But what I didn’t expect was to see when I saw the film were these moments that you were talking about… These little moments of emotional depth and vulnerability, that they would flow so seamlessly into this big spectacular, colorful, gory, action-comedy spectacle. That is really hard to do, to not make it feel forced… to get those moments with the characters when they are open and vulnerable. And it doesn’t feel pretentious or plastered on top of it. That was a real artistic feat.”

Regarding getting that mixture right, Gunn remarked, “I never think I’m going too much into emotion unless it becomes melodramatic instead of dramatic. There are times when people push things and I don’t want that to happen but I never shy away from the emotion. And I never shy away from the outrageousness as long as it’s something that’s involving to the audience instead of pushing them away. You can do things that push them away and there are times when we ride that line a little bit. There’s a couple of violent moments in the movie where I wondered, ‘Oh, is that a little too much?’ But I leave it in. But there’s also violent moments I took out because I thought it was just kind of belaboring the point and was unnecessarily gratuitous.”

Gunn and Cena recently wrapped up their follow-up to The Suicide Squad, Peacemaker, an eight-episode series about the character coming to HBO Max in January.

Asked about the series, Gunn noted, “In the movie, we get to find out a lot about Polka-Dot Man, we find out a lot about Bloodsport, and Harley and Ratcatcher, and I felt that there was a lot more to Peacemaker’s story that we didn’t get. John and I would talk a lot on set about who this guy is and where he comes from. And I think he is the guy who seems like he’s the one who fits in the best. He’s this white, muscular, frat boy, who is a kind of a bully and makes fun of everybody – a total douchebag. But I also think that he’s the one that actually has the most difficult time connecting to the other characters. Even at their most joyful, he feels like he’s on the outside. Getting to the bottom of that story, and what that story is, was exciting to me. Being able to show this level that John Cena has as a dramatic actor that people are not aware of was exciting to me.”

Gunn said another exciting factor was, “Being able to get into the politics a little bit more fully, because Peacemaker doesn’t share my politics, that’s for sure. And having Danielle Brooks’ character [“Leota Adebayo”] in the TV show and their friendship emerge, it’s an All in the Family situation where we get to see these different American perspectives sort of clash and come up against each other, but it’s all told within this giant science-fiction, action movie tale. That seemed incredibly fun to me and it was the most creatively fulfilling thing I’ve ever done.”

Cena explained it was an easy yes for him when he was offered the series, saying, “I wasn’t in control at all of the greenlight for the series, that’s all James, but to see what he wanted to come up with, as far as story, was really interesting. For him to call me up and be like, ‘Hey, I’ve been alone with my thoughts and I wrote eight episodes of Peacemaker. Do you want to do it?’ My answer was without a doubt yes, and what an amazing experience that was. I’m glad we got that all set and ready to go. I know everybody’s going to enjoy The Suicide Squad and we have a nice little follow up in January with this show.”

The Suicide Squad debuts in theaters and on HBO Max beginning the evening of Thursday, August 5.