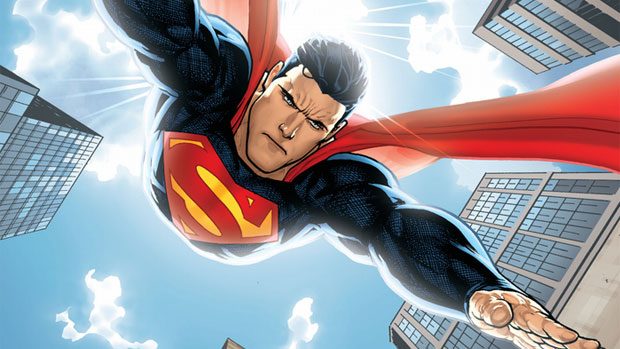 A ‘Character Chart’ of the superheroes – including a list of ability pros and cons for Superman, Wolverine, Mystique, Batman, The Flash, Thor, Iron Man, The Lizard, Spiderman, Ice Man, Silver Surfer and Black Bolt – can be found below 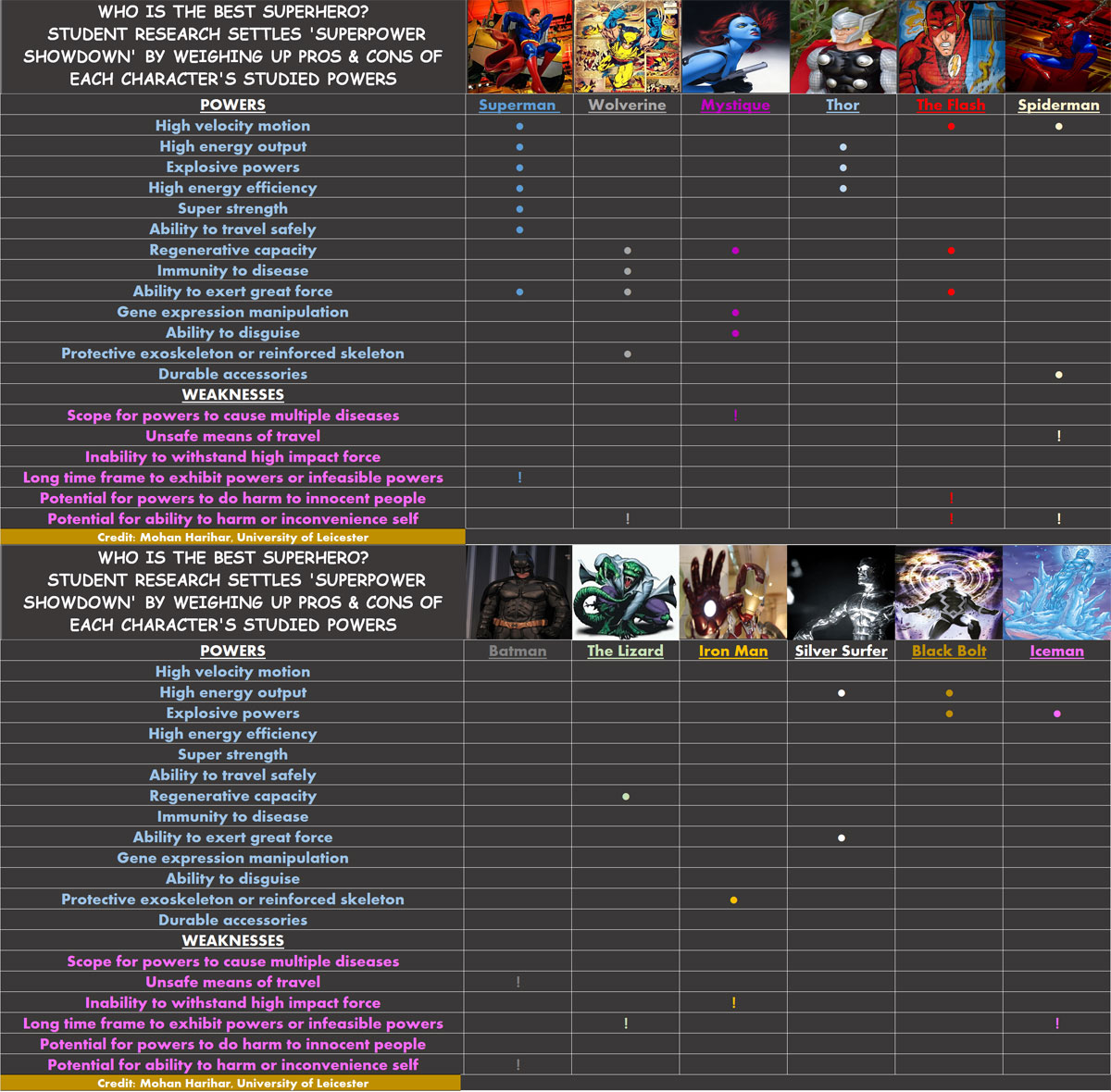 A feature explaining the ‘pros’ and ‘cons’ of the superheroes in more detail based on the student papers is available here: https://www2.le.ac.uk/offices/press/features/features-2016/superhero-powers-explained

Students at the University of Leicester have been using simple calculations to explain the feasibility of the powers behind of some of the most prominent comic book superheroes known around the world.

In the process, to coincide with Superman Day on Sunday 12 June, they have suggested that the best-equipped superhero of all could be DC’s Superman, followed closely by Marvel’s Wolverine, Mystique and Thor, based on their special powers.

In a series of papers published between 2009-2016 in the University of Leicester’s Journal of Physics Special Topics and Journal of Interdisciplinary Science Topics, student research has determined whether or not the seemingly superhuman abilities used by the famous characters in films and comic books are in fact possible.

Whilst Black Bolt, ruler of the ‘Inhumans’, may be the most destructive of the superheroes (capable of planetary annihilation), the student work suggests that, based on the range of superpowers at his disposal and the only limiting factor seemingly being the planet’s Sun, the ‘Last Son of Krypton’ Superman is likely to be the best equipped to win in an epic clash between all of the studied superheroes.

Boasting a super-powered array of skills, Superman, if obeying the ‘Law of Energy Conservation’, could exhibit a calculated stored solar energy output of 7.07×105 Joules per second for his ‘Super Flare’ attack. It is also shown that the ‘Man of Steel’, in theory, could have higher density muscle tissue than the average human which could aid in several of his superhuman abilities.

This incredible display of power makes Superman the number one candidate for ‘most powerful superhero’.

Honourable mentions go out to X-Men duo Wolverine and Mystique who were close contenders for the title of world’s finest in the student papers with their multitude of mutant abilities – including increased regenerative capacity and, in the case of Mystique, a mastery of gene manipulation to aid in disguise.

The superhero Thor, based off of the Norse god of the same name, would also be one of the most formidable superheroes, having high energy efficiency and explosive powers.

With strongest superhero determined, the student papers also shed light on who the most ill-equipped superhero might be – with a seemingly grim end result for Gotham’s ‘Caped Crusader’, Batman.

Though his cape proves to be a vital utility when gliding in comic and media depictions, the student-led research suggests that when gliding Batman reaches velocities of around 80km/hr – which could be fatal upon landing.

This inability to perform even the simplest of superhero feats suggest Batman would struggle to get off the ground, let alone save Gotham from the likes of The Joker and Bane.

With the release of DC and Warner Brothers Pictures’ Batman v Superman: Dawn of Justice and Marvel Cinematic Studio’s Captain America: Civil War, 2016 has proven to be the year of superhero face-offs.

Sunday 12 June also marks ‘Superman Day’, a tradition created by DC Entertainment to highlight the importance of the ‘Man of Steel’.

The students presented their findings in a series of short articles for the Journal of Interdisciplinary Science Topics and the Journal of Physics Special Topics, two peer-reviewed student journals run by the University’s Centre for Interdisciplinary Science and Department of Physics and Astronomy. The student-run journals are designed to give students practical experience of writing, editing, publishing and reviewing scientific papers.

Dr Cheryl Hurkett from the University of Leicester’s Centre for Interdisciplinary Science said: “An important part of being a professional scientist (as well as many other professions) is the ability to make connections between the vast quantity of information students have at their command, and being able to utilise the knowledge and techniques they have previously mastered in a new or novel context. The Interdisciplinary Research Journal module models this process, and gives students an opportunity to practise this way of thinking. The intention of this module is to allow students to experience what it’s like to be at the cutting edge of scientific research.

“The course is engaging to students and the publishing process provides them with an invaluable insight into academic publishing. It also helps students feel more confident when submitting future papers. I find it a very rewarding module to teach and I am always pleased to see my students engaging so enthusiastically with the subject. I encourage them to be as creative as possible with their subject choices as long as they can back it up with hard scientific facts, theories and calculations!”

The student papers suggest that fans can now end speculation as to who the best superhero would be if they were to exist among us, with Superman appearing to be the strongest and Batman trailing behind.

A feature on how ‘zany’ science projects can help students learn how to communicate research findings is available at: http://www2.le.ac.uk/offices/press/think-leicester/education/2015/zany-science-projects-help-students-learn-how-to-communicate-research-findings 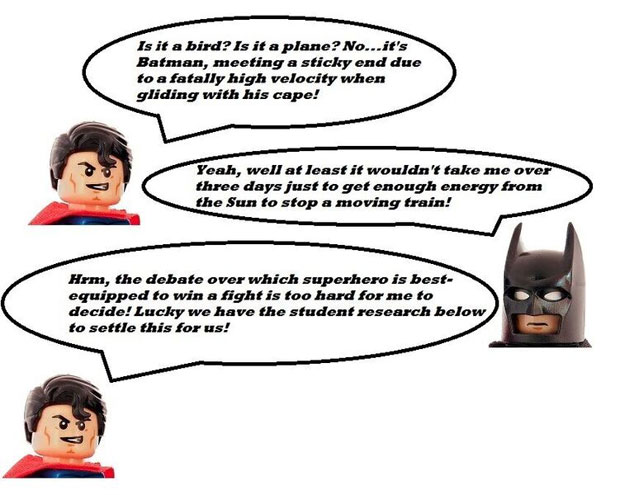 Do you have your own view on who the best and worst superheroes are? Share your views via social media using #SuperpowerShowdown or comment on this story on the University of Leicester News Facebook page: https://www.facebook.com/uolnewscentre/?fref=ts