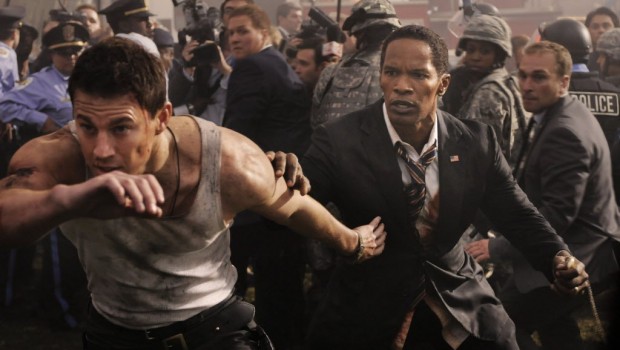 Summary: The pace grows sluggish, running out of gas well before the end, and Emmerich does a terrible job keeping the traitors a secret thanks to glaring close-ups and intrusive music cues. That's presumably why the film really failed: we're tired of this setup because we know how it begins and ends. Why would you pay to watch something you've already seen and done better?

White House Down is an appallingly sentimental Die Hard knock-off that would have John McClane scoffing at its weak action sequences and undying love for its commander-in-chief. Evidently, the US public was not feeling the same love during the American summer. White House Down was a box office dud that failed to break even on its $150 million dollar budget. Earlier this year, the soul crushingly bad Olympus Has Fallen was released, which was also a film about the White House being under attack by Asian terrorists. It proved to be an undeservingly huge box office ticket and showed that Americans aren’t tired of flag-waving or witch hunts for the good of national security.

The star and producer of White House Down is Channing Tatum, who recently attracted great box office numbers with Magic Mike, so he isn’t to blame either. Did people avoid the film because it reminds them of Obama’s waning popularity? Olympus had a clean-cut white President. To appear modern and politically correct, White House Down casts Jamie Foxx as the President. Given recent developments in Syria it’s difficult not to wince in disbelief when hearing how liberal and progressive the policies of his character are, including a bid to remove all American troops from the Middle East and how the pen is mightier than the sword. 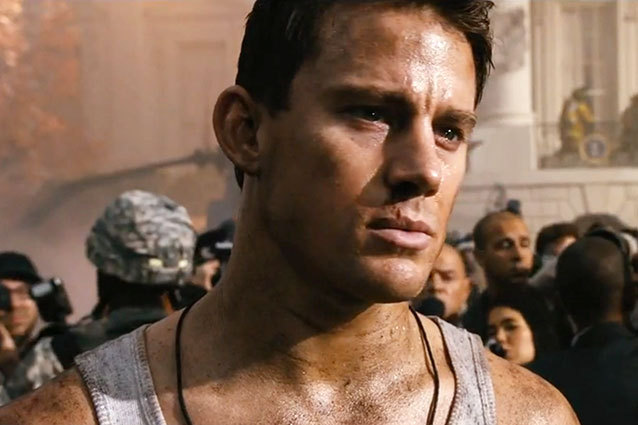 Furthermore, the film could also have failed because audiences know how to sniff out a bad imitation of Die Hard. Very few action films understand why that first movie was such a success. Die Hard’s greatest asset was its airtight setup and exposition, establishing McClane as a believable, ordinary cop with an edgy personality and failing marriage. The humanity filtered into the action sequences so audiences felt the rough and tumble and the bruises. The physicality in the stunts and Bruce Willis’ iconic performance is what makes Die Hard one of the finest action films ever made and why it has rarely been equalled.

The setup here is long and embarrassingly cliché. Cale (Tatum) is a police offer who escorts a politician Eli Raphelson (Richard Jenkins) to work. Cale is also the father of Emily (Joey King) who he doesn’t spend enough time with. To make up for missing her show, he arranges for himself and Emily to take a long tour of the White House where they meet President Sawyer (Foxx). Cale also has a job interview with Finnerty (Maggie Gyllenhaal) for a position with the Secret Service. She already knows him from college and doubts his ability, despite the fact he had three tours of Afghanistan as a soldier. When a bomb is detonated in the Capitol Building the White House is evacuated and Cale and Emily are separated. Walker (James Woods), a politician on his last day, has joined forces with a military type named Stenz (Jason Clarke) to try and kidnap the President. Cale and Sawyer team up to take down these terrorist thugs and rescue Emily.

The director was Roland Emmerich who specialises in large scale end of the world films (The Day After Tomorrow). This is his second effort to destroy the White House following Independence Day. The only bright spot that Emmerich brings to the tired, derivative material is that it isn’t racist like Olympus nor is it as self-serious. One of the lighter moments is when a wimpy tour guide finally arms himself with a shotgun. In spite of its occasionally jokey tone, the film is still a boring cocktail of aimless shootouts and male brutes wrestling with each other. It even resorts to the good old red countdown timer. If that doesn’t drain every ounce of sincerity from the father and daughter schmaltz, wait till you see a laughable end scene that bring new meaning to flag-waving.

The action scenes are disappointing and lack Die Hard’s physical heft. Tatum is too clean in the role. He doesn’t have the grit of Bruce Willis so the fights aren’t particularly convincing, nor does he have the actor’s hilarious tongue in cheek snark either. Action films don’t have to be deep but they need to be punchy. The plot is bloated by setpieces but also over-stacked with too many side characters, including a computer hack I’m sure is meant to be Julian Assange. The pace grows sluggish, running out of gas well before the end, and Emmerich does a terrible job keeping the traitors a secret thanks to glaring close-ups and intrusive music cues. That’s presumably why the film really failed: we’re tired of this setup because we know how it begins and ends. Why would you pay to watch something you’ve already seen and done better?