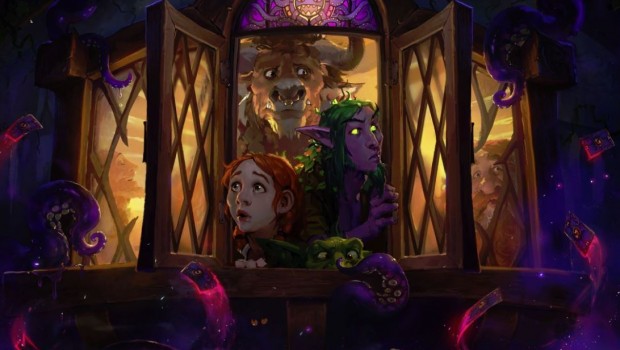 Whispers of the Old Gods to descend upon Hearthstone

SYDNEY, Australia—March 14, 2016—Prepare yourself, brave champion, for in the coming weeks an eerie darkness will weave its way into the tavern, filling its patrons with a spine-tingling uneasiness—and everything will change. Whispers of the Old Gods™, the third expansion for Blizzard Entertainment’s Hearthstone® digital card game, will unleash an ancient evil from deep within Azeroth, bringing with it 134 twisted, tentacle-packed cards—along with the legendary power of C’Thun, N’Zoth, Yogg-Saron, and Y’Shaarj.

Whispers of the Old Gods takes everything familiar in Hearthstone and turns it . . . inside out. Under the sway of the four Old Gods of Azeroth, familiar friends have been corrupted (and have sprouted a few extra eyeballs in the process), new monstrosities have appeared, and unrest spreads throughout the tavern with every turn. As the Old Gods and their crazed followers join you in battle, there’s no telling how much havoc you can wreak with their unique abilities and game-changing powers. By the same token, you’ll want to pay great attention to each play you make—for it could well be your last in the newest Hearthstone expansion.

Coming to PC; Windows, iOS, and Android™ tablets; and mobile phones, Whispers of The Old Gods card packs will be winnable in Hearthstone’s Arena mode, and purchasable with in-game gold or real money at the same prices as Hearthstone’s other card packs. Starting March 15, and up until the expansion is released, those brave enough to call forth this ancient and incredible power in battle can pre-purchase Whispers of the Old Gods card packs in a special 50-pack bundle, for a one-time price, starting from $64.99 AUD (one purchase per account). Whoever does so and lives to tell about it will receive a unique themed card back.

To embrace the darkness, and read up on all things Old Gods, visit www.oldgods.com. The Whispers of the Old Gods™ Announcement trailer is also available here: https://www.youtube.com/watch?v=AIZtzknw_sk