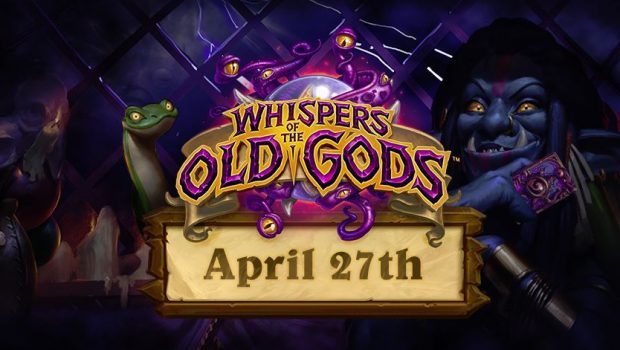 Whispers of the Old Gods Creeps into Action on April 27!

Who’s got hundreds of eyes, dozens of appendages, and some rather interesting plans for the tavern? The Old Gods, of course! They’re eager to meet you, and offer you a horrifying delightful new perspective on Hearthstone!

Hearthstone’s third expansion, Whispers of the Old Gods, will be launching on April 27 in Australia and New Zealand for Windows and Mac PCs, iOS and Android Tablets, and mobile phones. Players can pre-purchase an all-knowing, all-seeing, cosmically powerful bundle featuring 50 packs (for the price of 40), and an out of this world card back, via the in-game shop now! The pre-purchase period for Whispers of the Old Gods ends when the expansion launches.

Whispers of the Old Gods introduces 134 brand new, totally not corrupt cards that are sure to change your perception of the game… and the tavern… and possibly a lot of other things. The Old Gods are benevolent (we cannot stress that enough) entities of supreme power who have come to show everyone just how much fun everything can be when you relax, and stop worrying so much! Some of your favourite adversaries and allies from the tavern have already met the Old Gods, and are much, much better for it!

You can find all the cards from the expansion announced-to-date on the Hearthstone Facebook page here. For more information, please visit the Whispers of the Old Gods website here.