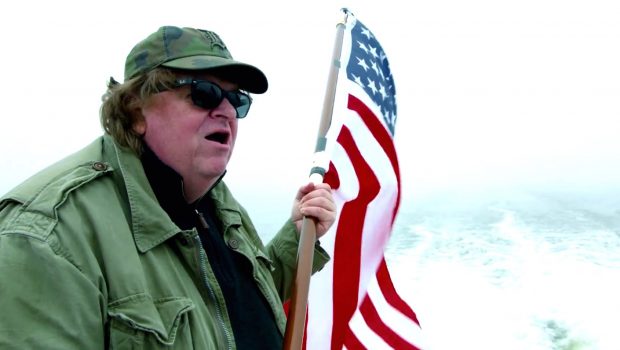 Where to Invade Next – Film Review

Michael Moore’s new film Where to Invade Next is a fictional comedy-drama about a man who goes on holidays and learns about the world. Masquerading as a documentary, it contains as much fantasy as The Huntsman: Winter’s War. Some of its most fantastical elements come intentionally from the optimism of Michael Moore himself as he looks at the positive social reforms of multiple European countries. But likewise, the substance and nuances of these countries is nonexistent and paints parts of the world as lush, green and civilised fairytales, born from people being nice to each other. This isn’t to say that Invade isn’t pleasurable. Michael Moore’s liberal politics and outspokenness regularly overshadows how simply entertaining his films are by being loaded with hilarious self-depreciating humour and poignant narration over occasionally hard-hitting episodes. These qualities are again present and enhance a very interesting concept or gimmick for Moore to pilot, countering the fact that he completely overlooks global problems. But it’s also time for Moore as a filmmaker to develop new stylistic devices. The way he finds an ironic tone and emotional high points comes from techniques he’s been using since Bowling for Columbine, such as juxtaposing an upbeat song with troubling footage. In this case “We are the World” is played over footage of police brutality to punishing effect but naming a comparison to the device means it’s becoming overly familiar to us.

The film’s concept is broad and ambitious enough that Moore could have spent a movie on each topic. Some have suggested he could have divided each one into a television miniseries. Disheartened with the state of the American social landscape, Moore decided he would visit or “invade” several European countries himself to steal their ideas and bring them back to the US. He is parodying the carelessness of American invention and the country’s general incompetency and necessity to plagiarise other cultures. He travels to Italy, France, Slovenia, Germany, Canada, Norway and others to explore everything from employment, imprisonment, worker’s rights and the role of women in government. The film doesn’t start strongly in Italy. It’s amusing to hear an Italian couple discuss the number of paid holidays they earn per year, which vastly outweighs the meager rewards of the US working life. While Moore salivates over the fantasy of a sundrenched poolside holiday, he neglects all of Italy’s economic problems, some of which have resulted from the very things he glorifies such as lunches at home and weakened productivity. The film is like a lot of cheese without a pizza base as Moore cherry picks information. Note how he’s never disappointed by any of the places he visits.  Instead, he shows a liberal prison system in Norway, where prisoners are educated, given Xboxes, recording studios and the keys to their own cells. His point is that the US prison system could improve the standard of living for criminals with the intention of rehabilitating them by treating them as humans. It is an entirely appropriate idea but he never factors in the enormity of the US population in standardising these unique living conditions. Moore also projects himself as a feminist, citing the women in charge as a common factor in the progressiveness of the places he visits. But gender forms a surprising but one-dimensional discussion. Hillary Clinton’s right-wing politics and favourability to corporations is a counterpoint, like the entire US Election, that never crosses the director’s mind. These are examples of the way Moore resists compromising his utopian vision of Europe, as a resort built on hippy-like rhetoric, by omitting facts and nuances, which is his major weakness as a documentarian. 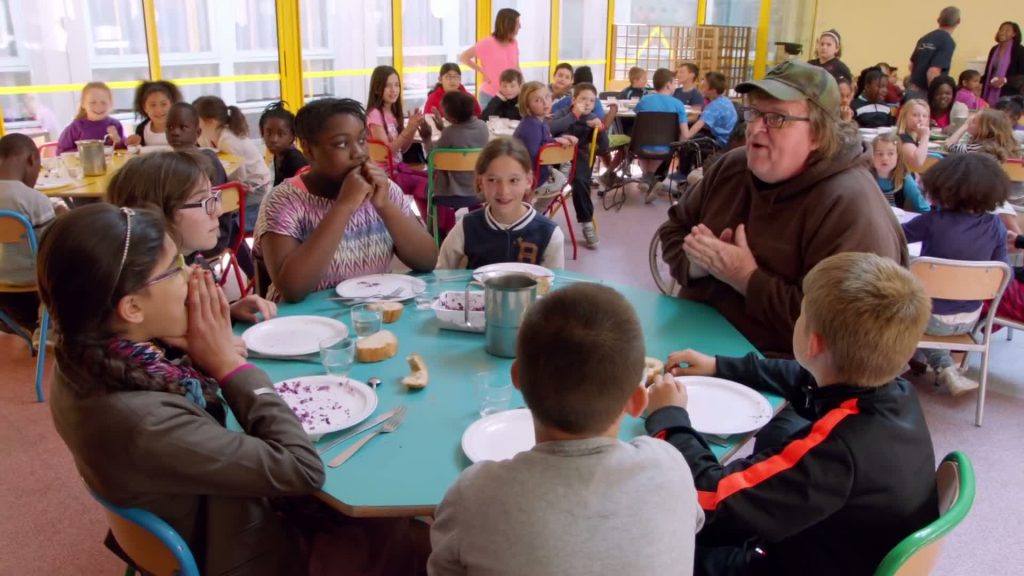 In spite of the film’s simplicity, the director’s balance for humour and pathos still forms a powerful and entertaining contrast of tones. Michael Moore again puts himself on camera and uses this to great comedic effect to play the devil’s advocate by asking questions in an ironic way as a parody of American stupidity and their geocentric thinking. His selection of intercuts and clips, such as cutting to a monster truck rally as a highlight of American culture, are punchy and hilarious. As is the footage of an American simpleton, who tries justifying practicing abstinence his entire life in Texas. There are also moments of great poignancy such as when he visits the schools across Europe that express the necessity for children to be treated as themselves, not machines, and that children from different socioeconomic classes should be mixed together to close the gap between wealthy and poor students. The scenes in France where the children learn about food and social etiquette are the film’s best episodes. For emotional high points, Moore’s visit to Germany shows how the Germans do not shy away from their violent history but are purposely reminded of it every day—a contrast to how Americans try to censor their history. These episodes work because they feel honest and informative. Yet it’s also rich for Moore to criticise America for hiding its past when he’s overly selective about what information he omits. The film’s running time is indicative of his generalisations. It’s too long at two hours in length and had he been more judicious with the topics he could have avoided generalisations. It’s a blisteringly funny movie, with positive social reforms on display but take it with a huge grain of salt because it is a liberal fantasy from an idealist desperate for answers.

Where to Invade Next – Film Review Damien Straker
Score

Summary: It’s a blisteringly funny movie, with positive social reforms on display but take it with a huge grain of salt because it is a liberal fantasy from an idealist desperate for answers.