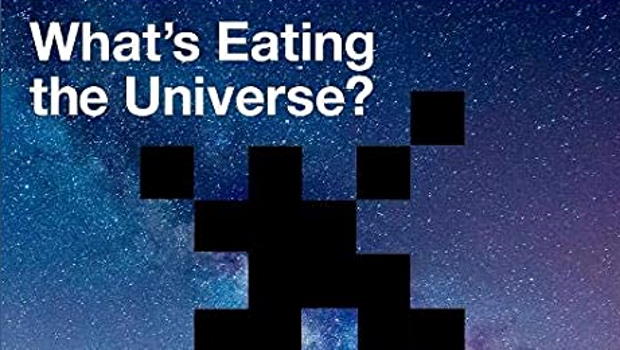 Summary: A great tour of cosmic science, what we know and what we'd like to know.

It’s not uncommon when hearing about a professionals first spike of interest in their chosen field to learn that there was a person, or a book or an experience that gave them the proverbial “ah hah” moment. I could imagine What’s Eating The Universe being that for some young future astronomer/astrophysicist/cosmologist. My own interest in cosmology and related fields goes back to watching science documentaries with my dad and it’s remained a fascinating field (one I like to think I understand in broad terms but easily get lost when getting into the finer points of the mathematics of it all). I found myself thoroughly engaged throughout and being keen to know more and really that’s all you could ask of a book like this.

Paul Davies does a wonderful job making some of the big concepts accessible in a sort of “first year university introduction class” way. He gives us the general concepts and where we’ve been, where we are and where we hope to be in the future. There’s an oft used expression that runs something along the lines of “if you can’t explain it to a 6 year old, then you don’t really understand it yourself.” (attributed to Einstein no less). Personally I think it’s an oversimplification and it’s personally possible for someone to understand something themselves but just not be able to convey it to others… Paul however seems to not only well and truly understand what he is talking about… but he also has a fantastic way of explaining it to others that makes even the seemingly most complex of cosmological concepts seem quite accessible.

If you wanted an overview of some of the questions that scientists have been working on over the decades (or centuries in some cases), What’s Eating the Universe is a great book to dig into. It explores the current interests and challenges but also explains the origin of some of our present understanding (and the corrections we have had to make along the way). It covers science in a way that more people need to understand, that is… it’s a field that is open to change. Science isn’t about a never changing set of rules… it’s about the best explanation we have for the way things are and that explanation will stand until we find a better one or something shows it is wrong.

I think part of the strength of What’s Eating the Universe is that it allows room for the reader to come up with some of their own ideas. Current theories are put forward, but not singular “this is the current belief” sort of theories… more “some scientists think this… others think that…”. What that does is it shows differing thoughts are allowed (if not encouraged… well… maybe not entirely encouraged as you will also read of how dismissive some “gate keepers” can be of young thinkers daring to postulate new ideas) and knowing that even the people who are devoting their entire career to solving these problems have different ideas for what the solutions might be arguably frees the reader to consider all they have read and all they know and perhaps form a different theory and whose to say that won’t be the correct one.

I highly recommend this book for anyone with an interest in cosmology or who has a child expressing an interest in the cosmos. It’s a great overview of the current state of cosmology and I suspect it just might inspire some people to dig deeper and maybe even become a future cosmologist!