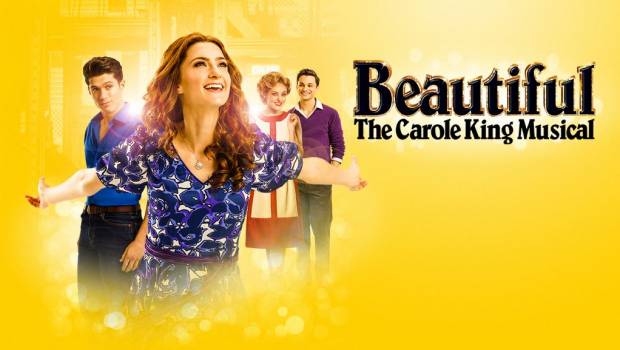 Beautiful: The Carole King Musical is the perfect musical”

Oh Carol! It has been a triumphant week for joyous Broadway hit Beautiful: The Carole King Musical, winning top honours in five categories at the annual Helpmann® Awards and marking its Brisbane premiere with full houses and rave reviews.

The production opened in Brisbane on Thursday, with theatre goers on their feet in raptuous applause for the talented cast of 24 performers. Rave reviews followed with Courier-Mail critic Phil Brown writing “It has everything. It’s beautifully written, it’s moving, it’s funny, it has great songs and a cast that couldn’t be better… No wonder it won all those Helpmann awards earlier in the week.”

“HONESTLY There wasn’t a moment in it that I wasn’t absolutely enthralled!”

“ALL KINDS OF WONDERFUL”

“What a show. Standing ovation indeed –

I would still be there if the theatre hadn’t closed around me!”

The feel-good song list is jam-packed with timeless hits from the 60’s and 70’s, including You’ve Got a Friend, Will You Love Me Tomorrow, It’s Too Late, Locomotion, (You Make Me Feel Like) A Natural Woman, I Feel the Earth Move, You’ve Lost That Lovin’ Feeling, On Broadway and We Gotta Get Out Of This Place.

Critics have been unanimous in praise for leading lady Esther Hannaford’s “sublime performance” (Daily Telegraph) since the Australian premiere at Sydney Lyric Theatre in September 2017.  She is one of the country’s most awarded performers, now with two Helpmanns, a Sydney Theatre Award and three Green Room Awards to her name.

Beautiful was written by the Oscar®, Emmy®, BAFTA and Tony® Award-nominated Douglas McGrath, directed by Marc Bruni, choreographed by Josh Prince and produced in Australia by Michael Cassel in association with Paul Blake and Sony/ATV Music Publishing.

The Brisbane season is the last chance to see Beautiful anywhere in Australia – the musical must leave QPAC on Sunday 2 September after a 12 month tour around the country.

Final tickets are now on sale from QPAC or beautifulmusical.com.au.

In person at QPAC Box Office