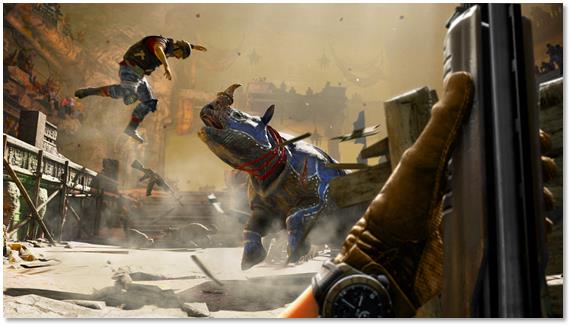 WELCOME TO KYRAT! GET A GLIMPSE INTO FAR CRY 4’S STORY

Kyrat is a remote region located high in the Himalayas: from vast plains and thick lush forests to snowy mountain peaks, players will travel through settings as diverse as they are detailed. However, these beautiful sceneries are devastated by a civil war. Even long after Pagan Min’s rise to power, the struggle between his army and the rebels continues. Embodied by the Golden Path, the opposition to his dictatorship isn’t free from internal conflicts as Sabal defends more traditional ways compared to Amita who wants to open her country to modernity. Players will control Ajay, a young man whose ties with Kyrat’s history are deep though not clearly known by him. He went to his homeland to fulfil his mother’s last wishes, but the decisions made during his journey will have major consequences on the ongoing conflict.