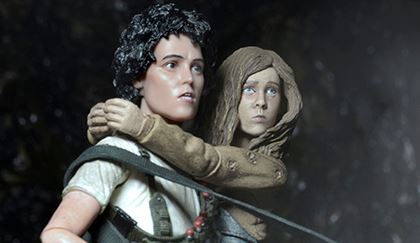 Tons of new photos! Our latest Kenner tribute is happening in Aliens Series 10, featuring amazingly updated versions of the classic figures from the ’80s – and we’ve got a veritable plethora of action shots for you on this #FacehuggerFriday. Keep scrolling, and expect Series 10 to ship later this month! Aliens – 7″ Scale […]

Coming soon to retailers! This week two of our hottest figures are rolling out from the NECA warehouse to retailers – the Donatello and Deadpool 1/4 action figures! Check out info and images (including packaging shots) below and look for them soon on a shelf near you. Teenage Mutant Ninja Turtles (1990 Movie) – 1/4 […]

In preparation for its upcoming sequel, Alien: Covenant, we return to Ridley Scott’s sci-fi thriller Prometheus! At long last, this series includes the never-released figures fans have been requesting: Vickers, Shaw and Fifield. The 7” scale figures are entirely movie accurate and feature over 25 points of articulation. Vickers (Charlize Theron) comes with flamethrower and […]

Celebrate some of the most iconic vehicles from film and television with CINEMACHINES die-cast collectibles! Each exceptionally detailed piece measures 5-6” long and is made from die-cast metal and plastic that’s carefully hand painted and ready to add to your collection. From Terminator 2: Judgment Day, the Hunter Killer Aerial features an articulated cannon that […]

Celebrate some of the most iconic vehicles from film and television with CINEMACHINES die-cast collectibles! These exceptionally detailed pieces are made from die-cast metal and plastic that’s carefully hand painted and ready to add to your collection. At 6.5” in length, the Hunter Killer Tank from T2: Judgment Day is longer and also more massive […]

For the first time ever, as part of the film’s 25th anniversary celebration, Terminator 2 is being released in theaters in 3D! To celebrate the historic occasion, NECA is releasing a Galleria version of the chilling T-800 with accessories that’ll let you reenact one of the film’s most iconic scenes. You know the one: the […]