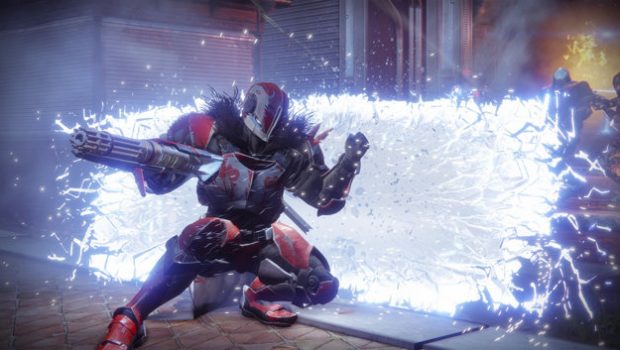 This Week at Bungie – Rallying to our favourite faction

This week at Bungie, we’re rallying to our favourite faction.

Anytime your favourite faction is brought up, some friendly smack talk follows. With Faction Rallies, we get to settle those old scores and declare a winner based on which garners the most Guardian support. Right now, millions of Guardians are seeking out and destroying enemy supplies, completing public events, competing in the Crucible, and tackling the endgame. They’re doing their part. Would you like to know more?

Many of you are asking, “Who’s in the lead?” We won’t report on the race while it’s still in progress, but next week, once the winning faction rules the Tower unopposed, we might give you some insight on how things shook out. We will announce the winner on Tuesday, October 3, as soon as the scheduled downtime to deploy Hotfix 1.0.3.1 ends. That will be your chance to purchase the weapon from the winning faction in the Tower. There will be a significant discount if you pledged your loyalty to them during the event. The winning faction’s weapon can be purchased anytime during victory week, which lasts until the next reset.

Faction Rallies is set to become a new ritual that visits the Tower periodically. Once the event is over, tokens can no longer be earned, but you can still redeem any that you’re still holding to receive packages. Any engrams that are waiting to be claimed from a faction vendor will be auto-decrypted and placed in your inventory at the reset. Make sure you turn in all of your tokens before the end of victory week. They will reset before the next Faction Rallies event returns… sometime in the near future.

We are eagerly waiting, along with you, to see who prevails. You have until the weekly reset to make your mark on this event, and earn some loot to help define your identity. Get back out there and fight!

The Sands of War

Destiny 2 has a brand new sandbox full of weapons and abilities at your disposal. The community is already discussing what they believe to be the best tools of destruction to dispatch both alien combatants and other Guardians in the Crucible. Our team has been monitoring these conversations, along with the constant flow of data, to continue supporting the live game as we learn more from the millions of players playing it. We asked Senior Designer Jon Weisnewski to give us a brief update on their mission to keep your box full of sand fun. See John’s answers here.

If you want to make your voice heard, but you’re not sure where to jump in, I’m always keeping a sharp eye trained on our #Feedback forum. Constructive criticism and war stories are shared with the entire development team.

Next Tuesday, October 3, we are deploying Hotfix 1.0.3.1. It contains some fixes for issues some players are experiencing. See a preview of some of the changes you can expect to see when you download the update next week here.

Lens Flair – Movie of the Week

This week, we have three more winners receiving top honours for multimedia storytelling. If you would like your shot at winning it in the future, submit your video to the Creations page.

Movie of the Week: The Booping – A Tractor’s Story

At Bungie, we’re all having a great time playing Destiny 2 with you. We’re also enjoying reading everyone’s ideas on how to keep making the game better. Keep the chatter coming.