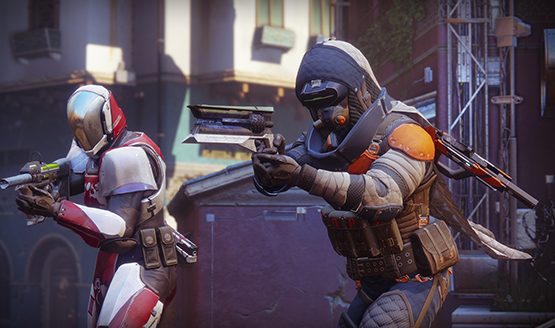 This week at Bungie, we’re gearing up for the last mile on the road to launch.

What excites us as we play final builds of the game at home is that we’ve held so many surprises back for you to experience on your own journey. Today, we’ll pull back the curtain and tell you a little bit about how the things you do know have changed since the Beta.

To Fight. To Crush. To Conquer.

Even if you were able to eliminate every last enemy of humanity from the solar system. There would still be other Guardians who would want to kick your ass. Enter the Crucible in Destiny 2 and you‘ll put your skills to the test in competitive 4v4 competitive multiplayer action, battling for glory against other players. If you missed it, watch the Official Competitive Multiplayer Trailer here.

Whenever you engage your fellow players in the Destiny arena, like you did in the Destiny 2 console Beta, our designers are studying you. They know when you play, how you win, why you lose, and what you have to say about it. They use all that knowledge (in concert with our own playtest war stories) to update an experience that is in flux until we rip it from their talons and press it onto a disc – or a download server.

All of this has happened before. And it will all happen again in the Destiny 2 PC Beta that starts with early access on August 29 in ANZ. Last week, we suggested that the new Beta build will include some changes.

Crucible Design Lead Lars Bakken has some information on how you’ll meet new people in the PC Beta.

One of our goals for Destiny 2 has been to create two different ways to challenge yourself against other players. From this point forward, to allow for more varied experiences between the playlists, matchmaking for Quickplay and Competitive will be tuned separately. Along with some other changes to the rule sets for specific game types, these are the moods we want to cultivate in the new Crucible.

Matchmaking times will be shorter, with less emphasis on Skill. This is the fastest route to a game, but you may face opponents outside of your comfort zone. The winning score in Control has been extended from 75 to 100 to allow for more time to play and use your abilities. Because too many matches were shorter than we expected, we’ve extended the trigger for the Mercy rule so it will come into play less often.

Matchmaking takes more time to introduce you to players that are closer to you in skill with a good connection, resulting in better quality gameplay. We have also made improvements to the way we calculate your skill in Countdown to better reflect how you’ll perform against your opponents.

Even if you’re not equipped with the exotic gadgetry you’ll need to jump into the Destiny 2 PC Beta, you’ll still experience the new state of the Crucible and the Sandbox in the version of the game that we ship to your console on September 6. Like its predecessor, Destiny 2 will adapt and evolve as you play it.

Every week, the community sends in videos and we pick our favourites to share here. To the winners go the spoils, and the spoils in this case is this nifty Emblem. If you want your chance to claim that Emblem, send in your video to our Creations page here.

Games change throughout their development. They grow and transform and refine every day. It’s our privilege to bring you along for that journey – but the game we finally deliver is the destination that really matters. You have a front row seat for a series of evolutions, and you’re a part of the creative process. Thanks for coming along for the ride, as we twist and turn down the winding road to launch.