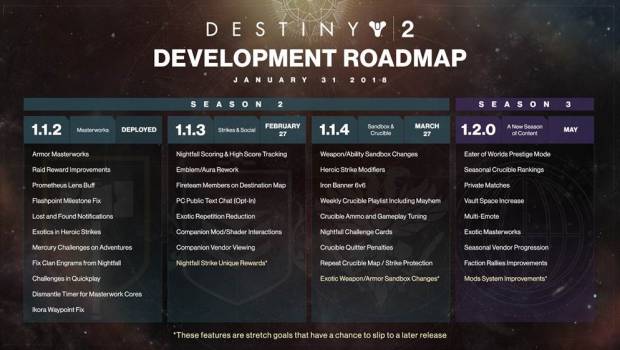 This Week at Bungie, we deployed an update to Destiny 2

This week at Bungie, we deployed an update to Destiny 2.

Update 1.1.2 went live earlier this week, infusing the player experience with Armour Masterworks and Raid Mods. Rewards have been restructured for Leviathan and Eater of Worlds completions, too! For a full rundown on patch notes, make sure to sort through the bullets.

Part two of the Fall of Osiris web comic series also became available. Right here on Bungie.net, you can follow the continuation of the story.

We’ve also mapped the road ahead, plotting a course through the coming months with a full schedule of updates. Christopher Barrett provides commentary for upcoming changes, with some insight as to what you can expect for the future of Destiny 2.

Everything you’ll find below will be delivered to every player of Destiny 2. Some of these delivery dates may change, but everything you see listed here is being worked on by the team. While there are larger projects in development, these are the game enhancements you’ll find in your immediate future. If any of these deployments change, we’ll let you know.

Take a peek, and sound off with your thoughts. Something you’ve been talking to us about might be on the list.

There are many new questions to tackle after this week. When’s the next Sandbox update? Have you heard our feedback about movement in Destiny 2? What about Shoulder Charge?

Read on if you want to know more.

On the Development Roadmap, we forecast one update that players have been talking about a lot. We’ve been gathering lots of feedback about the Destiny 2 Sandbox, and seeing it on a deployment schedule sparks more questions. Design Lead Josh Hamrick is here with the first of many rounds of answers which you can read in detail here.

When the internet fails, Aussie YouTube stars the RackaRacka go into the darkest depths of mum’s room to switch it back on in an epic Destiny 2 face off. Watch all the action here.

What a week. Iron Banner is in full swing, Masterwork Armour is available to earn, and Raid Mods have been equipped around the world to approach raid encounters with new strategy. Next week, we’ll talk to the Raid Team about some of the next challenges they’ll deliver to make you feel more prestigious in the Eater of Worlds Raid Lair. We’ll also be providing details on the upcoming Crimson Days event, going live on February 14 in ANZ.

What’s been presented in the Development Roadmap will become available to all players of Destiny 2, and serve to pave the way to Season 3. At the start of the new season, Expansion 2 will also become available with its own Raid Lair and an assortment of new content. There is a lot to do between now and May, and we’ll keep you updated every step of the way.