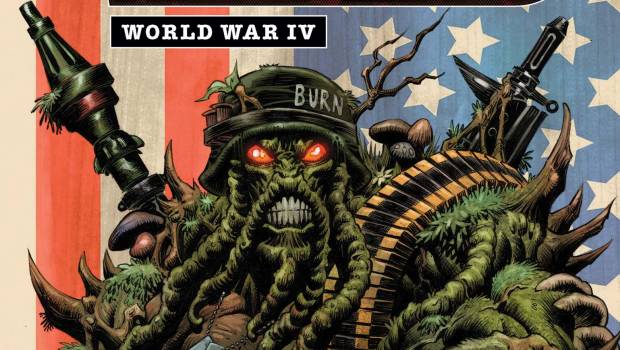 Summary: Two for one adventures of Weapon IV and Project Brute Force.

The Marvel universe has no shortage of secret government projects to create super soldiers running amok. Must be a much more competent government in that universe as the President can’t even get a blow job in our world without everyone in the world finding out about it whether they want to or not.

The first story concerns a man/plant hybrid created by the Weapon IV program who is tasked for “one last mission” to find his brother who was working on an invasive fungus before he disappeared.

I enjoyed this story as it reminded me of the Predator and had elements of previous stories such as Wolverine and Weapon X in it. As I said before there are no shortage of secret government projects running amok, mutants and superheros in this universe.

Great artwork to go along with it and it reminded me a lot of Swamp Thing and the one episode of the Twilight Zone where the fungus escapes from the meteorite.

This seems like it will be a good story to follow moving forward and I look forward to future entries.

This series ran in the 90s as Project Brute Force and this seems to be a reboot. It also reminds me that Animal Rescue Squad still has not been released, boo!

A nice enough reboot of this series but not sure if it couldn’t have been spun off into its own comic to give Weapon IV a few more pages. There might even be a crossover between the two I do not know.

Kind of a nice to have to add to this release but not really necessary, I would still buy it for the first story mainly.