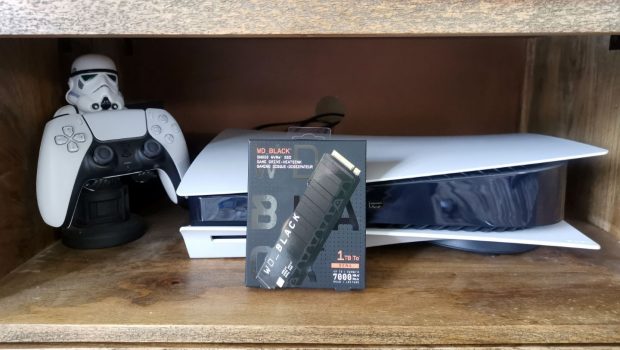 Summary: The WD_BLACK SN850 NVMe SSD provide a much needed storage boost for your PlayStation 5!

The PlayStation 5 (PS5) is an an amazing next-gen console, however it comes with a very small NVMe SSD at just 825GB and while it provides super-fast load times, it limits the number of PS5 games that you can install on your console. This is frustrating. Almost a year after the PS5 was launched (12/11/20), Sony released a new system update that allowed gamers the option of adding another NVMe SSD which means you can finally break the 825GB space barrier. 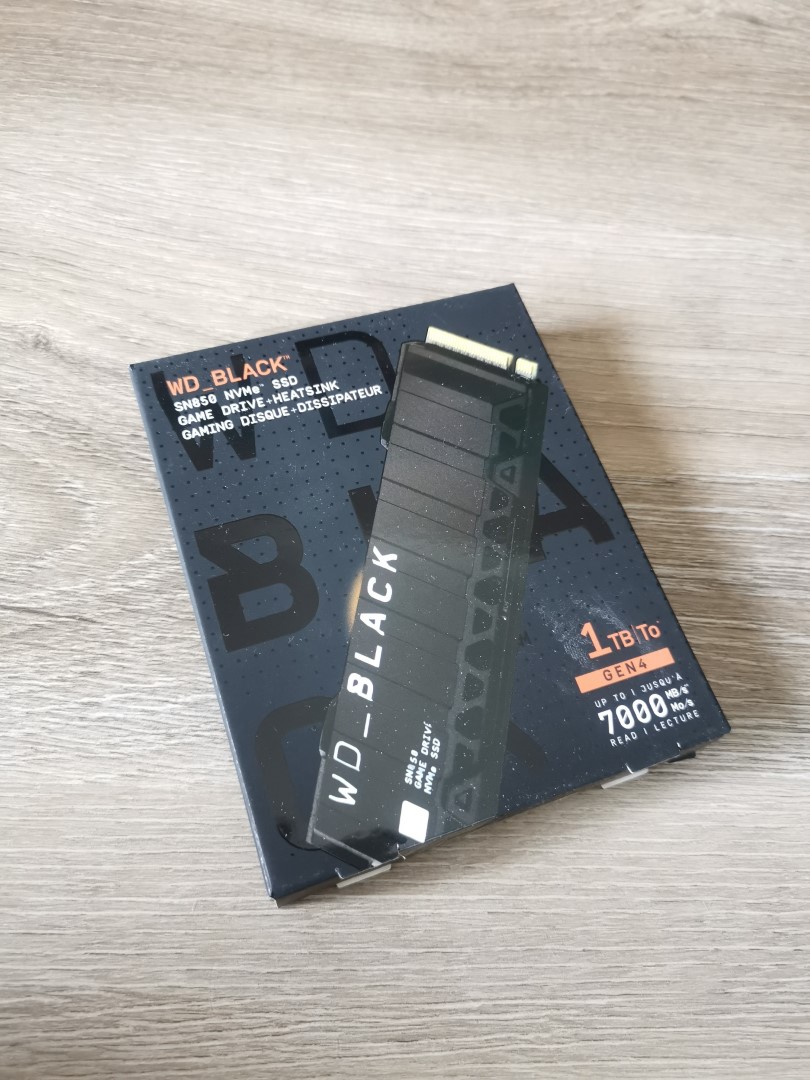 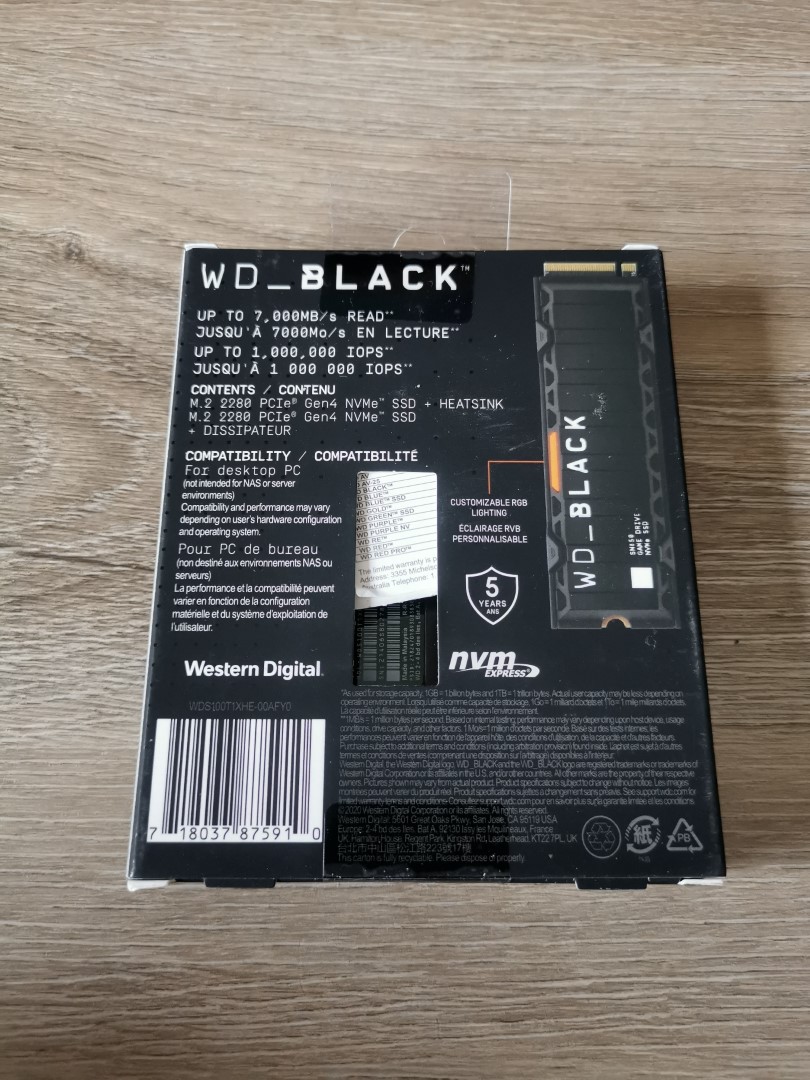 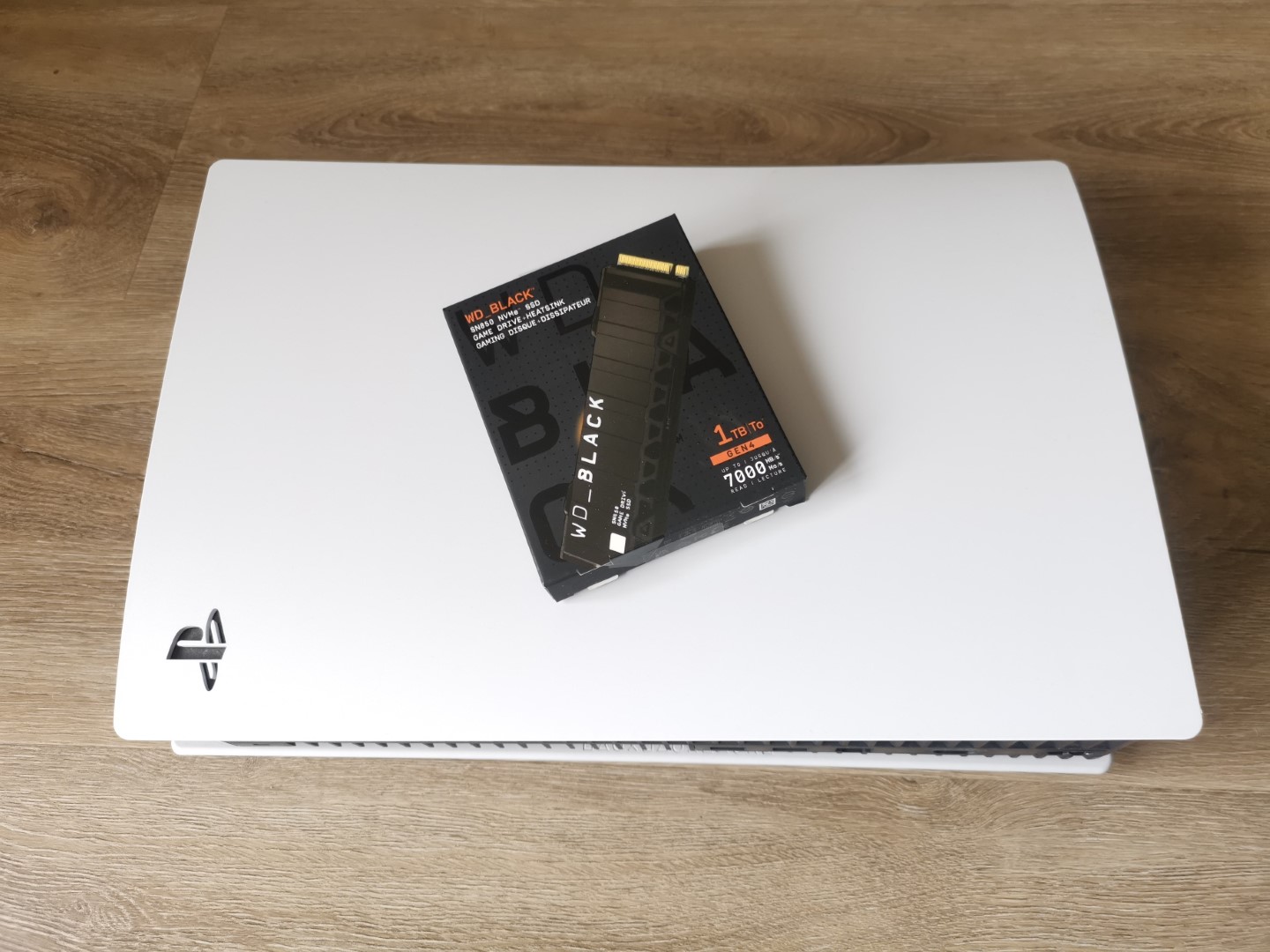 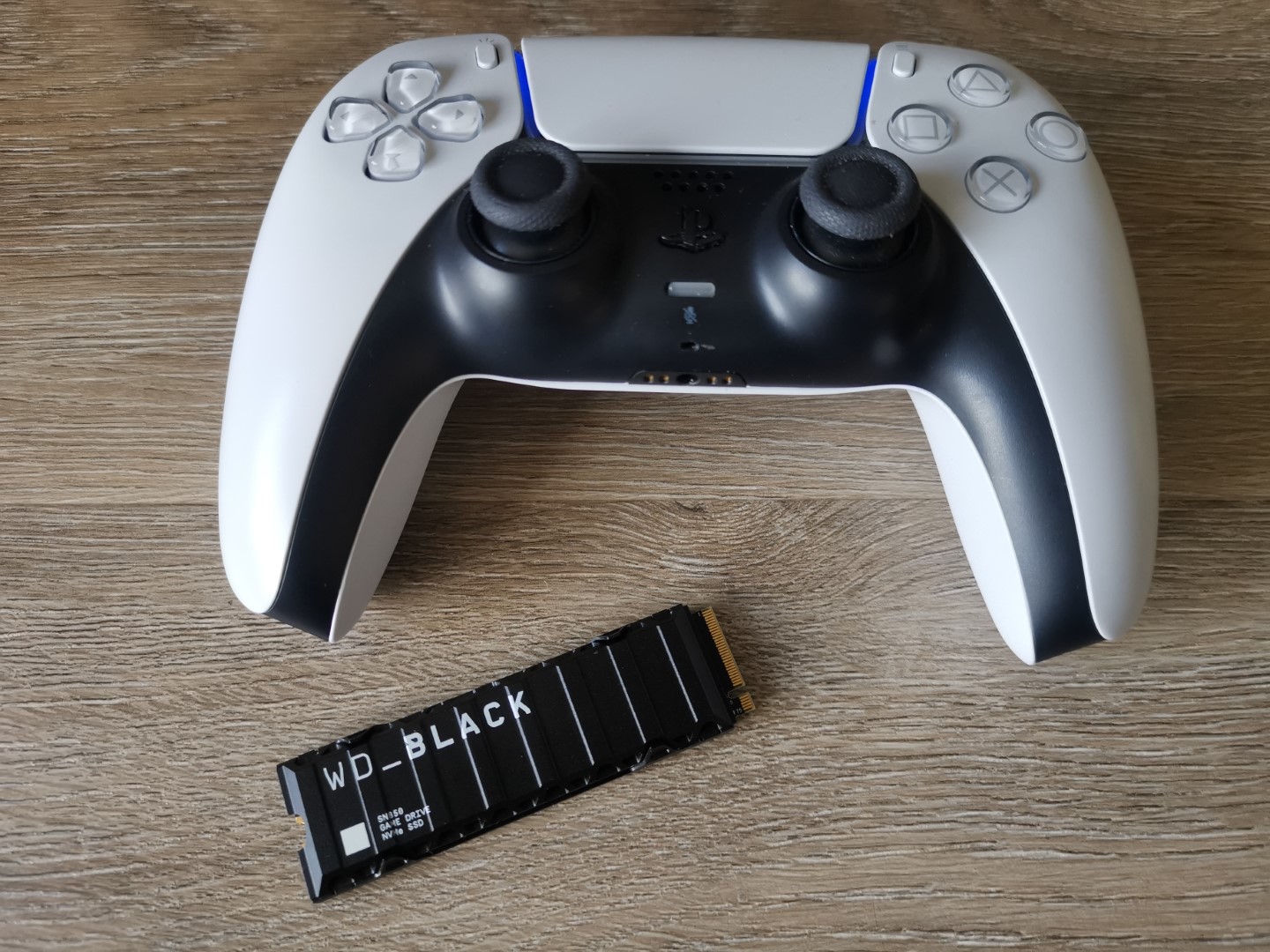 This is where the WD_BLACK SN850 NVMe SSD (Also PC compatible, including a model without the heatsink) literally comes into play and we were given the opportunity to check out the 1TB model on the PS5 that in essence gave us a total of 1.8TB of glorious and much needed gaming space. The WD_BLACK SN850 NVMe SSD also boasts the latest NVMe SSD technology to ensure fast read/write times plus this model comes with a heatsink for additional cooling and for full specifications, check out the infographic below; 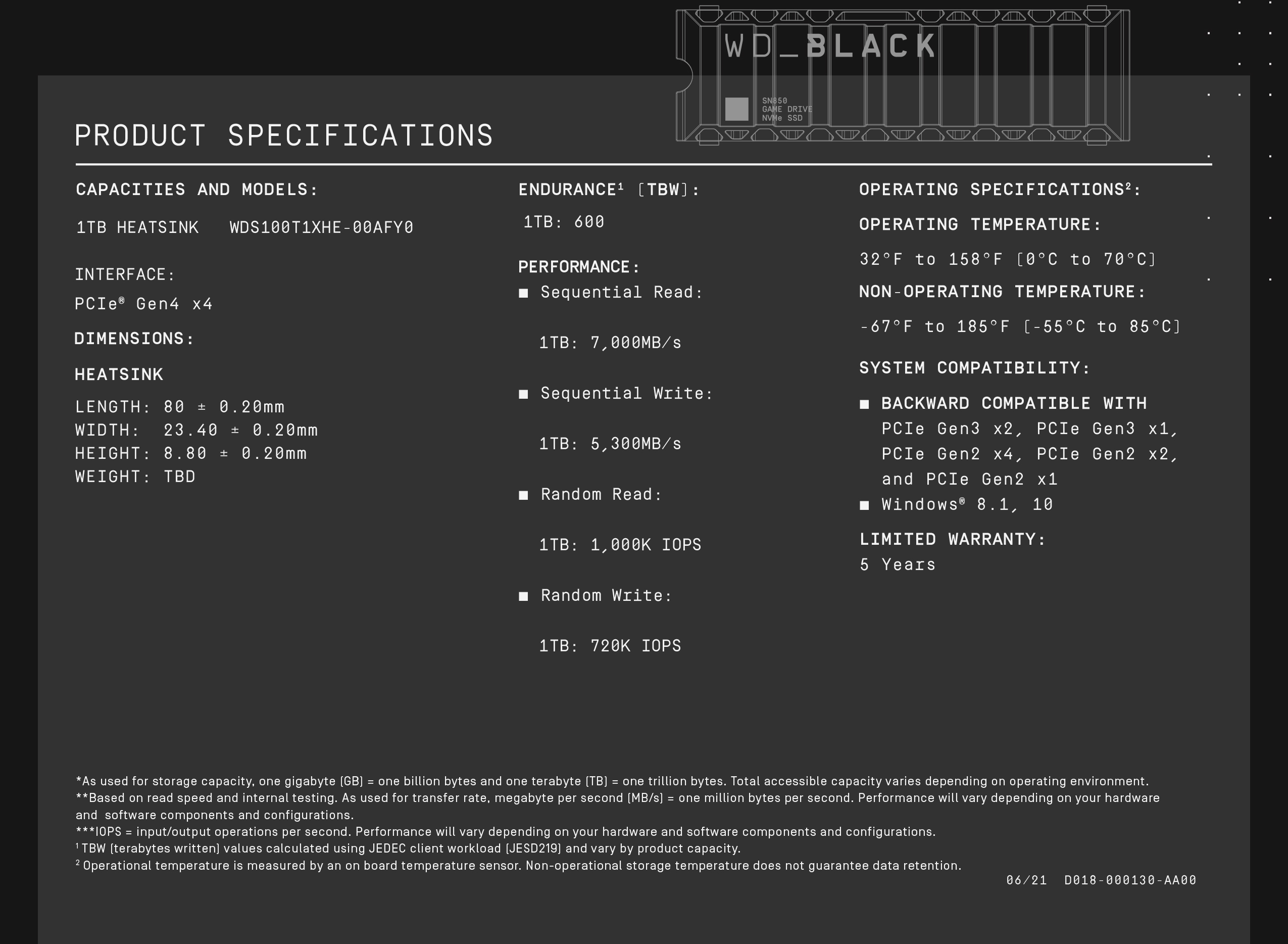 The drive also comes in three sizes that include 500GB, 1TB (reviewed) and 2TB. However before we installed this SSD into our PS5, we first tested it on a PC with the usual suspects and first off the bat was the excellent CrystalDiskMark that while not real-world, it does give the user access to the theoretical speeds of this NVMe which mirror the advertised speeds. 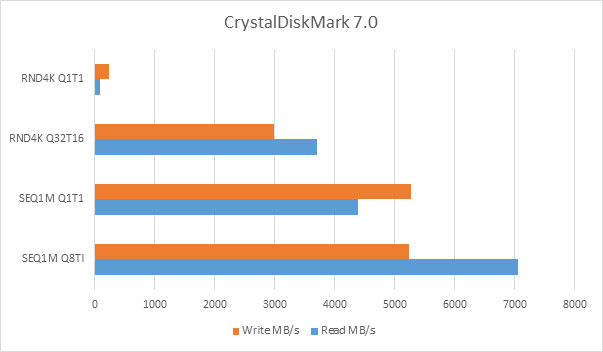 So as you can see from the results above, this current model WD_BLACK truly flies. Additionally, the RND4K Q32T16 IOPS score for read is 904289.48 and for write 724333.23 which really makes this NVMe a speed beast. Another benchmarking app called AS SSD also produced an impressive read and write score with the following benchmark speeds; 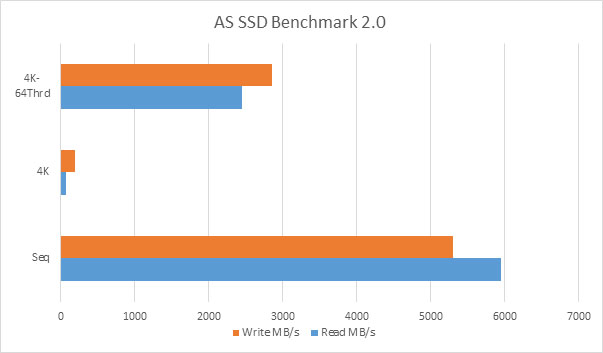 Adding to this was the Acc.time of 0.019ms for read and 0.019ms for write which is basically how long it takes for the drive to be ready for the next request. In other words, another feature for additional speed. Anvil’s Storage Utilities 1.1.0 is another comprehensive benchmark test for the latest storage drives that include both SSD and NVMe technologies. The read benchmark was 10,534.91 and the write was 13,675.09 that puts this drive in the top echelon of NVMe drives.

Lastly, Final Fantasy XIV Stormbringer offers a real-world game benchmark test and the WD_Black scored 9.38. This means super fast read and write times for gaming. In terms of gaming and compared to our previous SSD, the speed is very noticeable as we played titles such as Assassin’s Creed Valhalla, Star Wars Rogue Squadron and Call of Duty Black Ops. 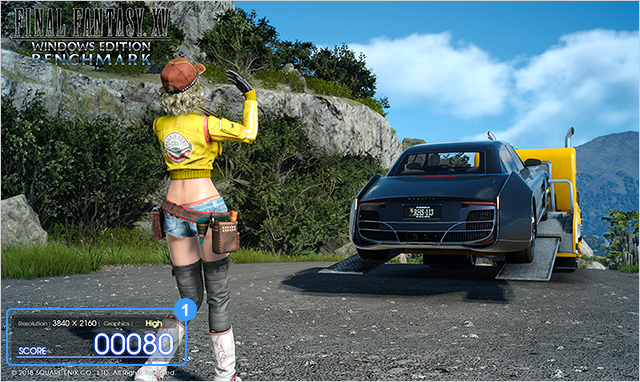 The last benchmark application we used was PCMark 8 Storage which scored the WD_BLACK SN850 at a respectable 5143 which again is on the higher end of the spectrum when compared to this technology. What I like about PCMark 8 Storage Test is that it mimics real-world usage such as Microsoft Office and Adobe Creative Suite, including game such as Battlefield 3 and World of Warcraft 2. 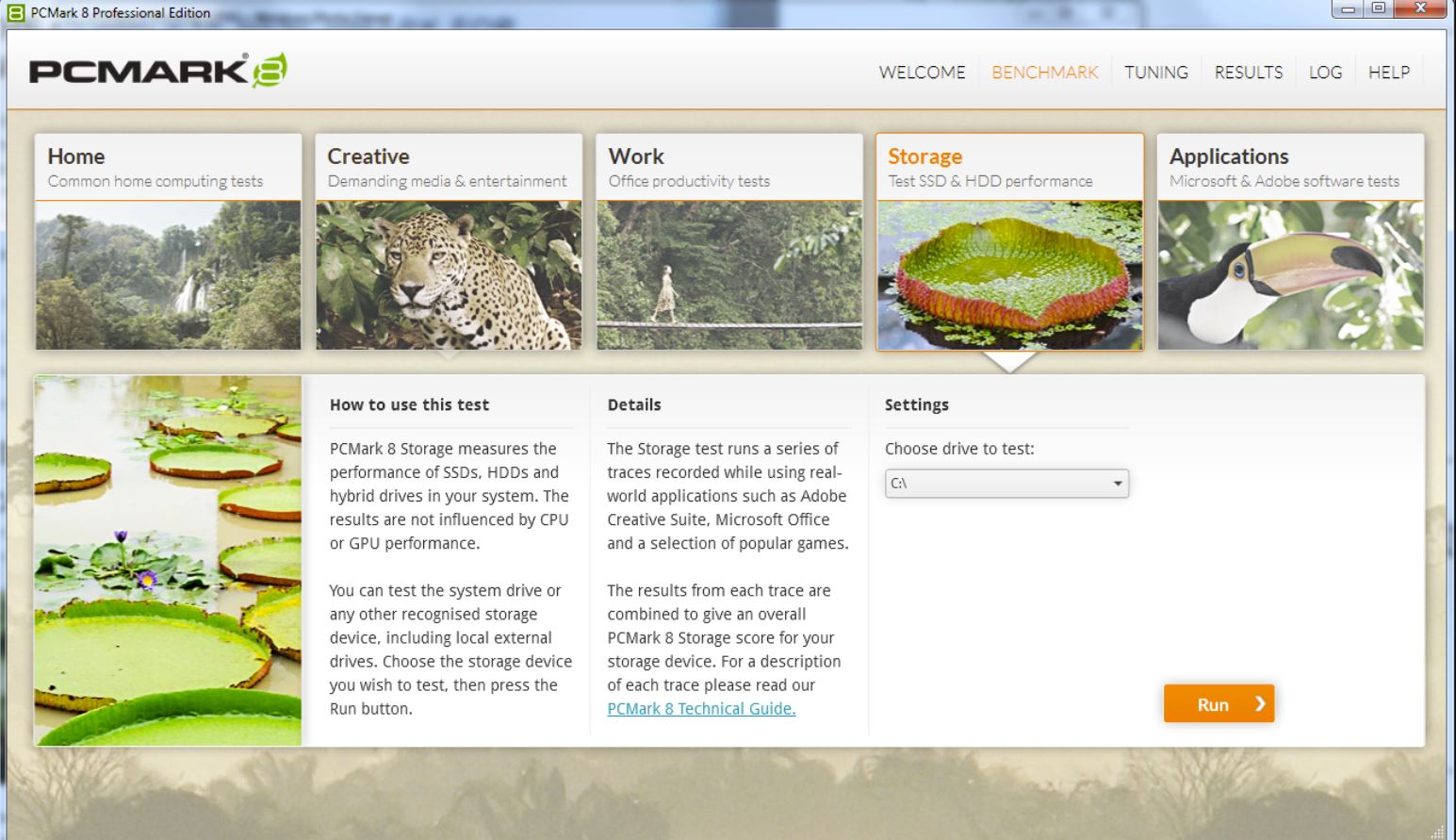 Installing the WD_BLACK SN850 NVMe SSD into our PS5 was a little nerve racking as it is not as easy as the Xbox Series X which just slots into the back of the console. While there is a process, Sony make this relatively easy and the first step is to ensure your PS5 is off (not sleep mode) and then allow it to cool down if you were playing games. Once this is done, you flip the console over and ensure the power button is away from you. You then twist the bottom cover by holding the bottom right and top left as it almost slides off… Next up, you remove the protective metal cover over the NVMe SSD expansion slot and presto, you’re ready to install your WD_BLACK SN850 NVMe SSD into your PS5 as a second drive. 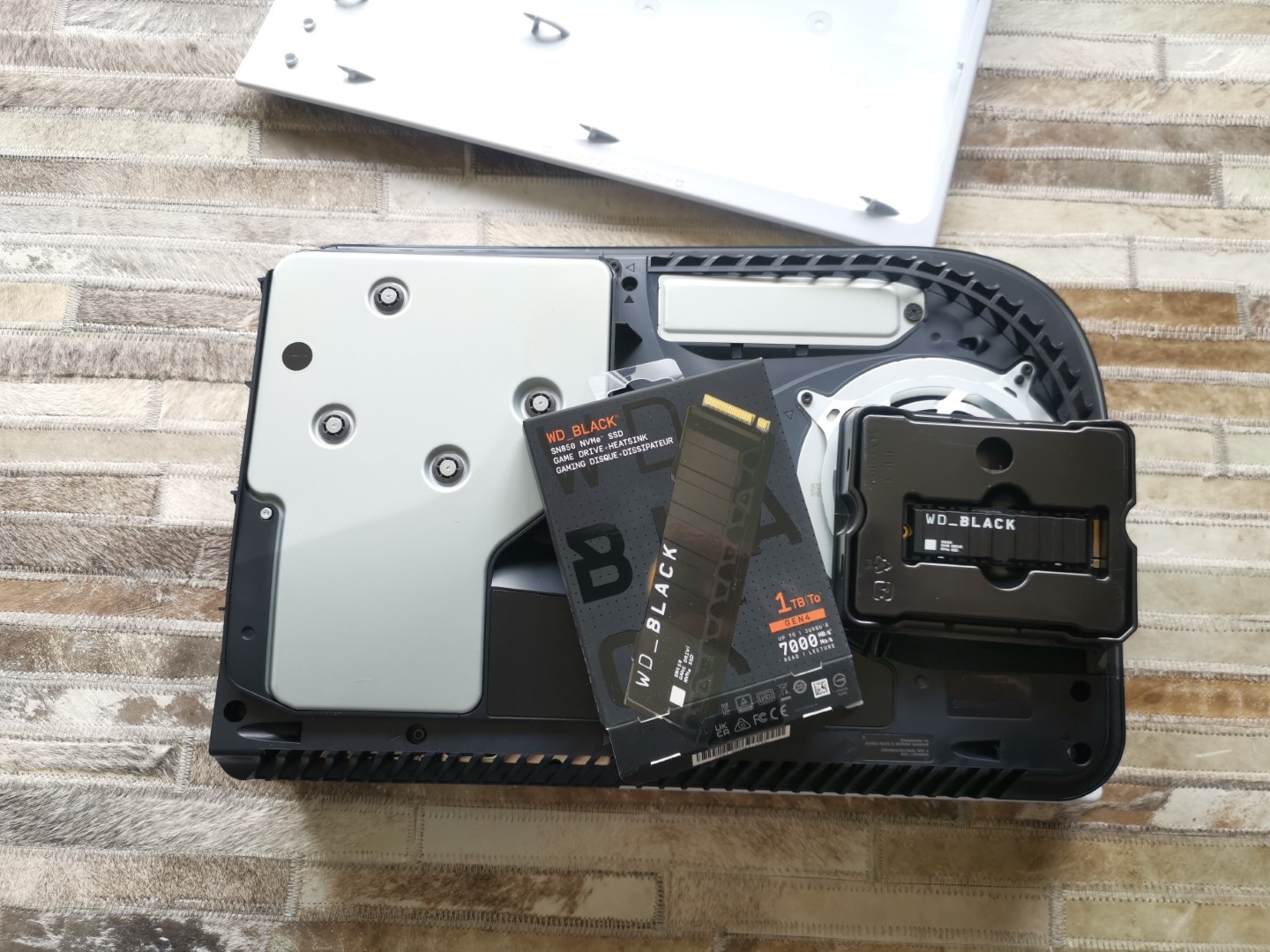 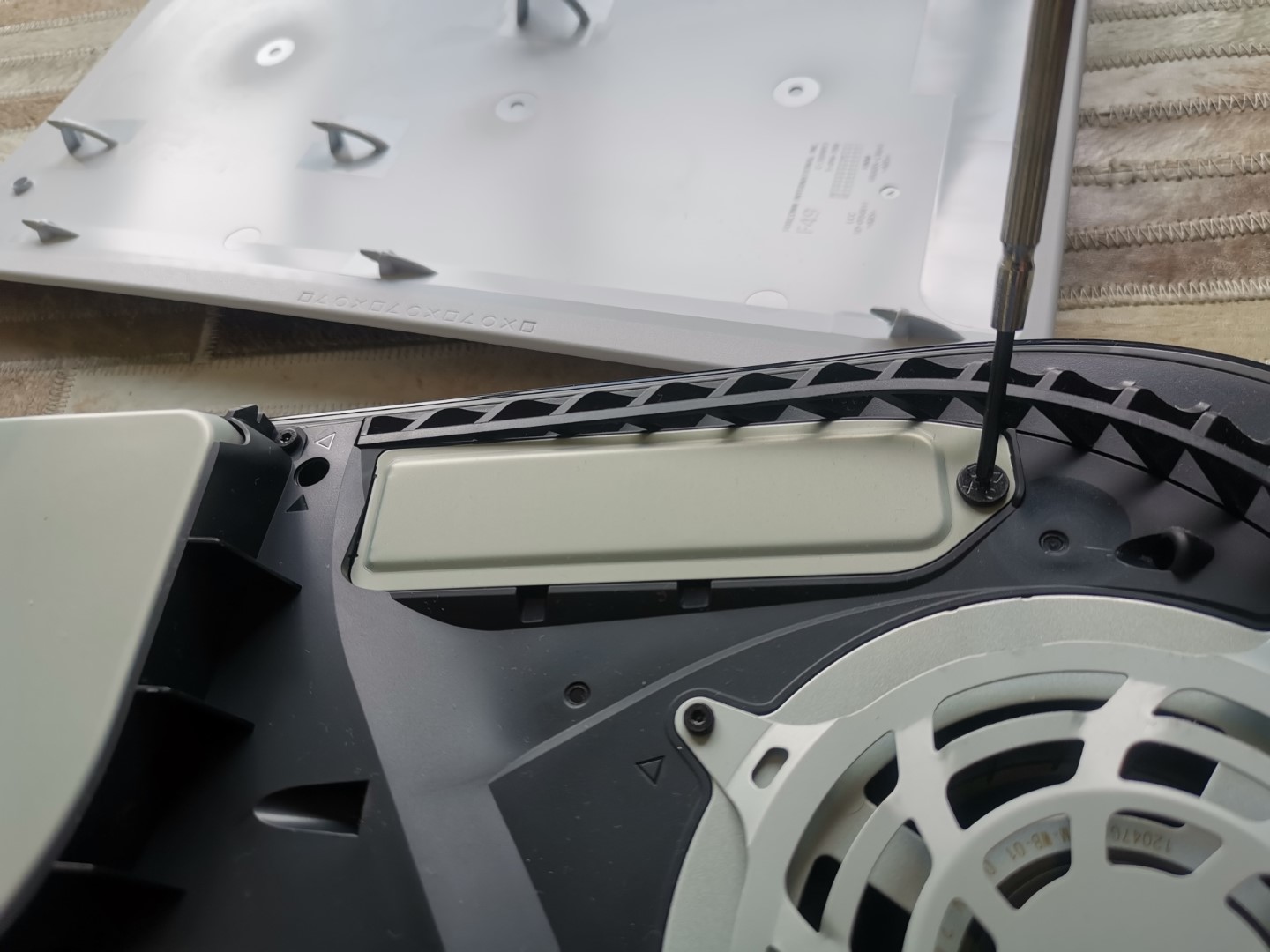 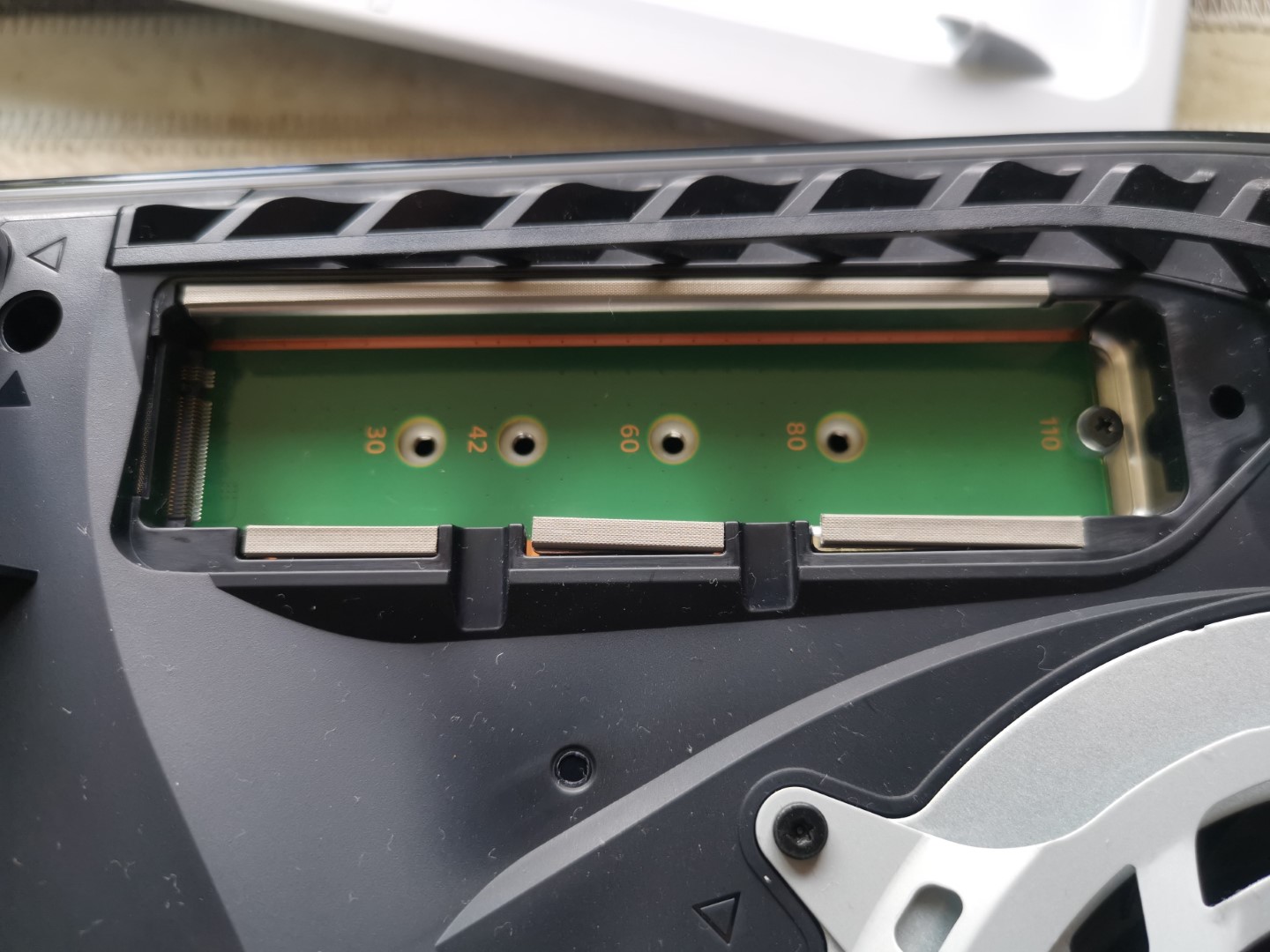 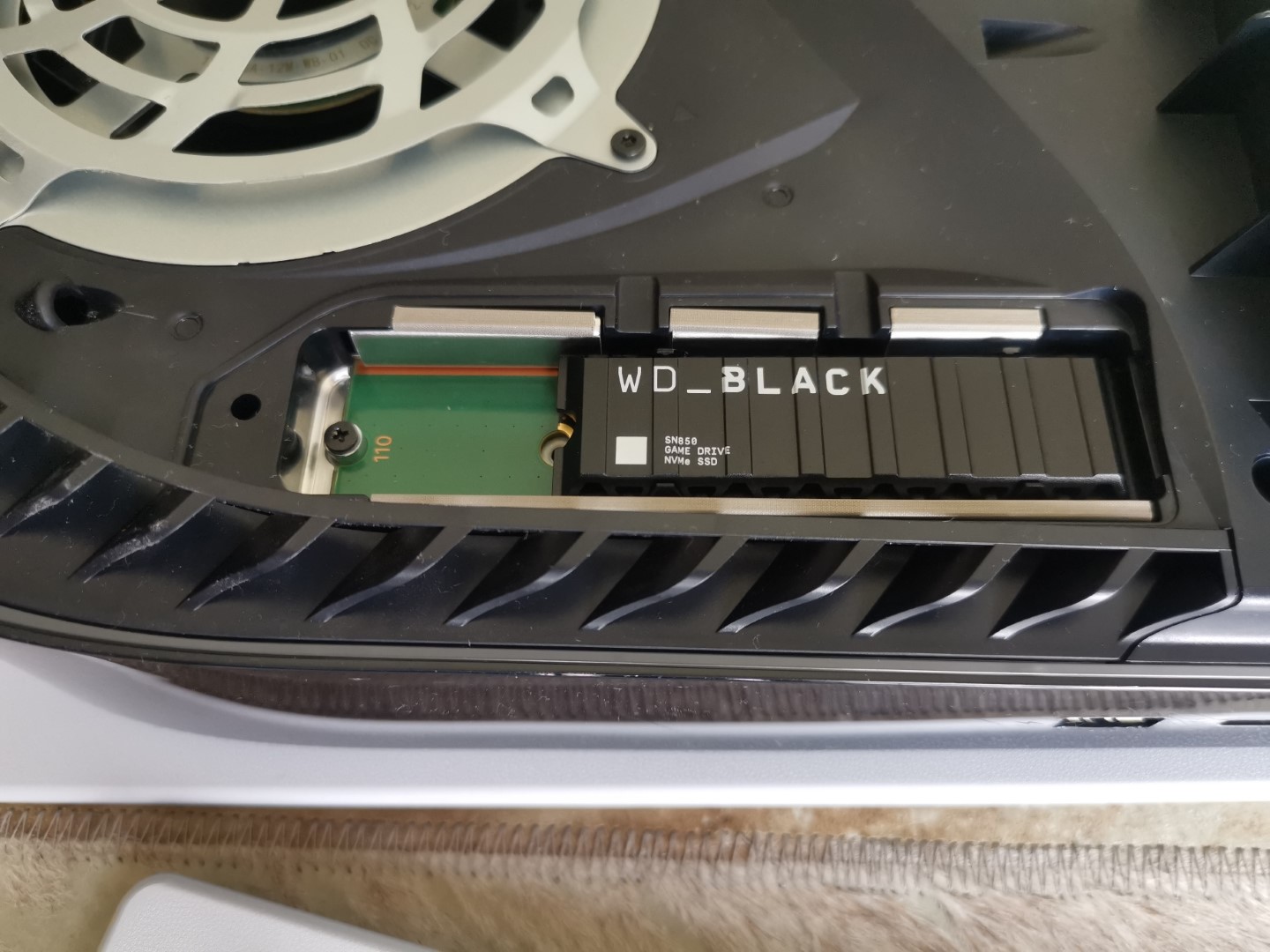 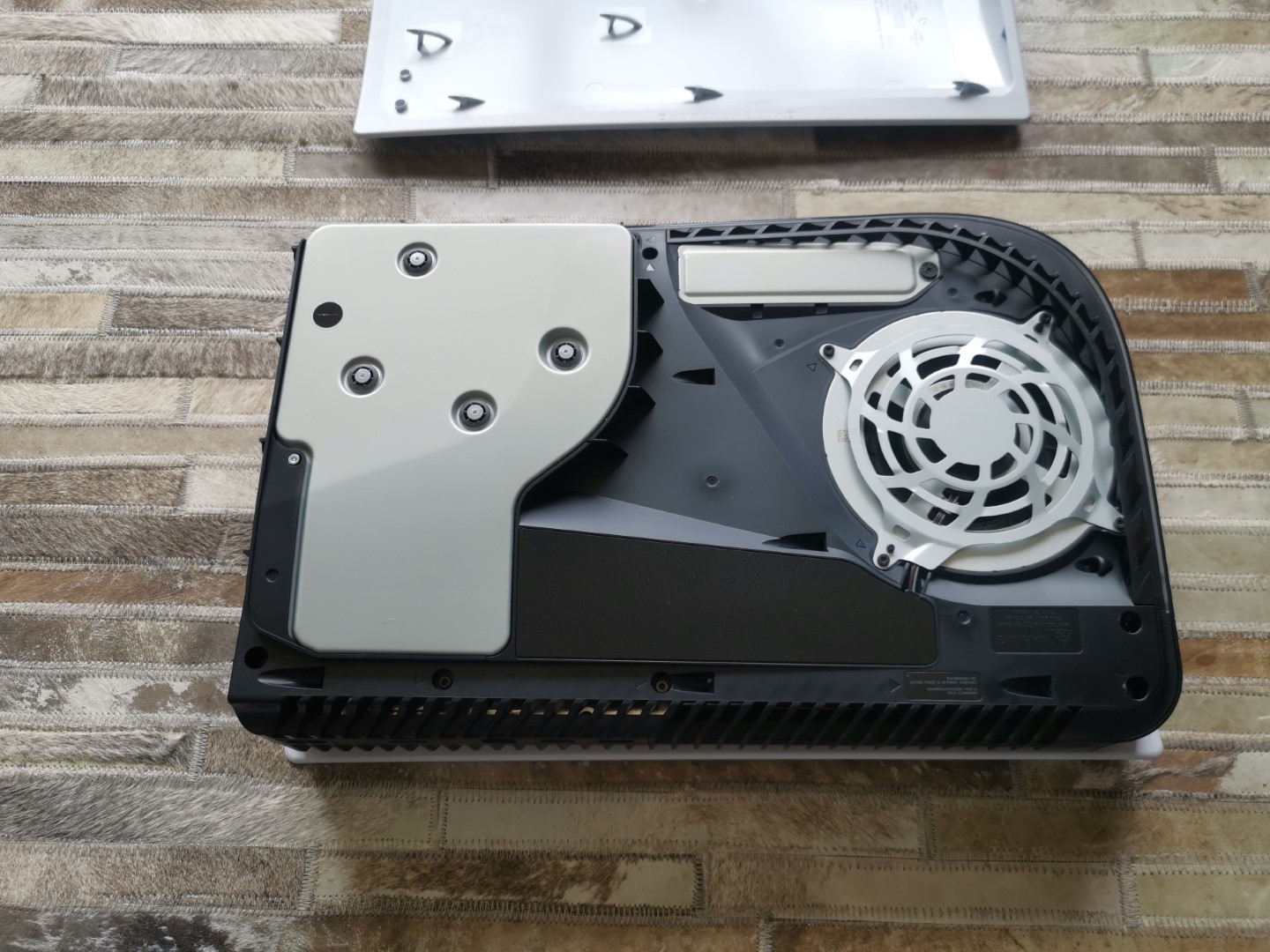 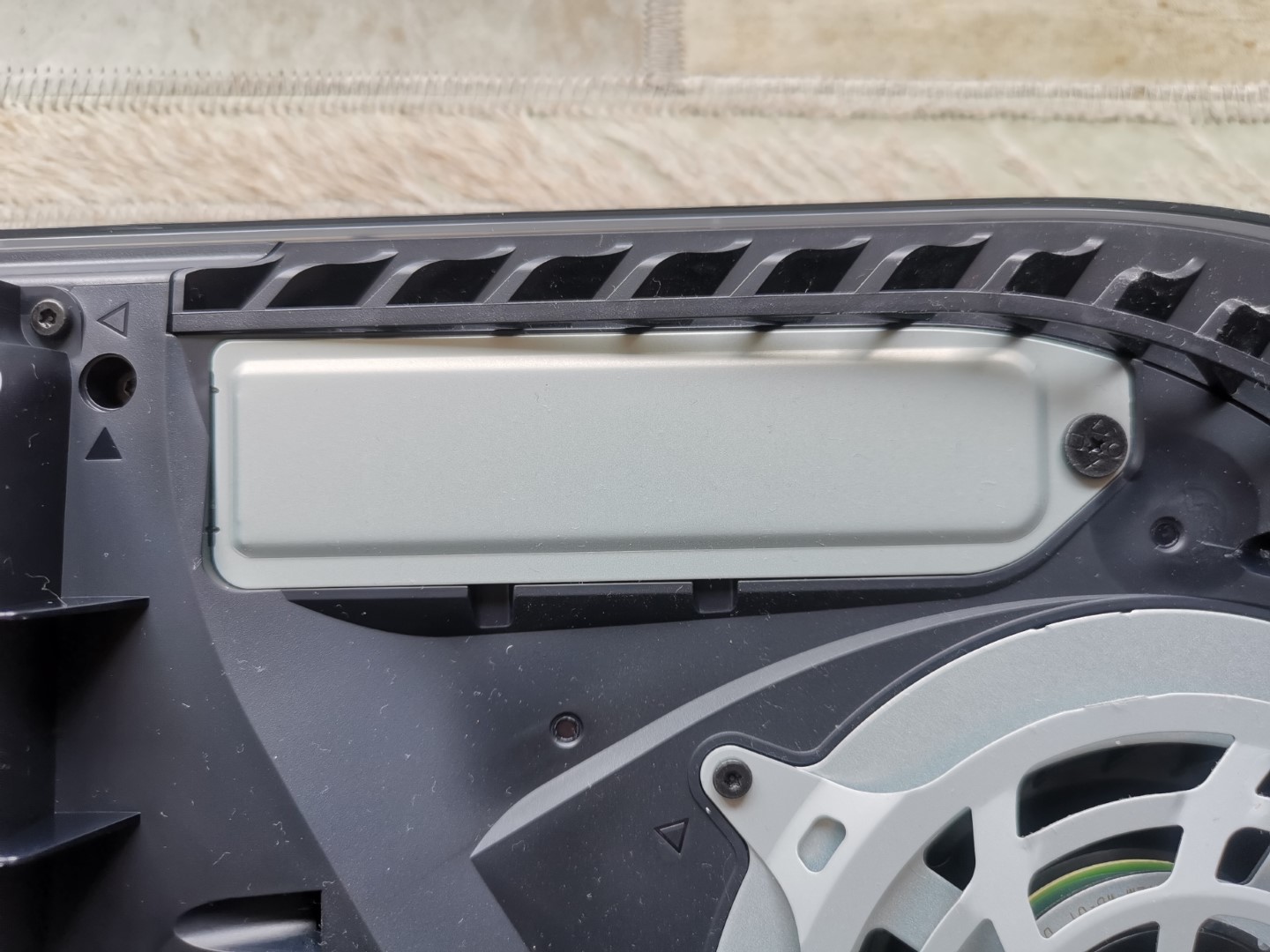 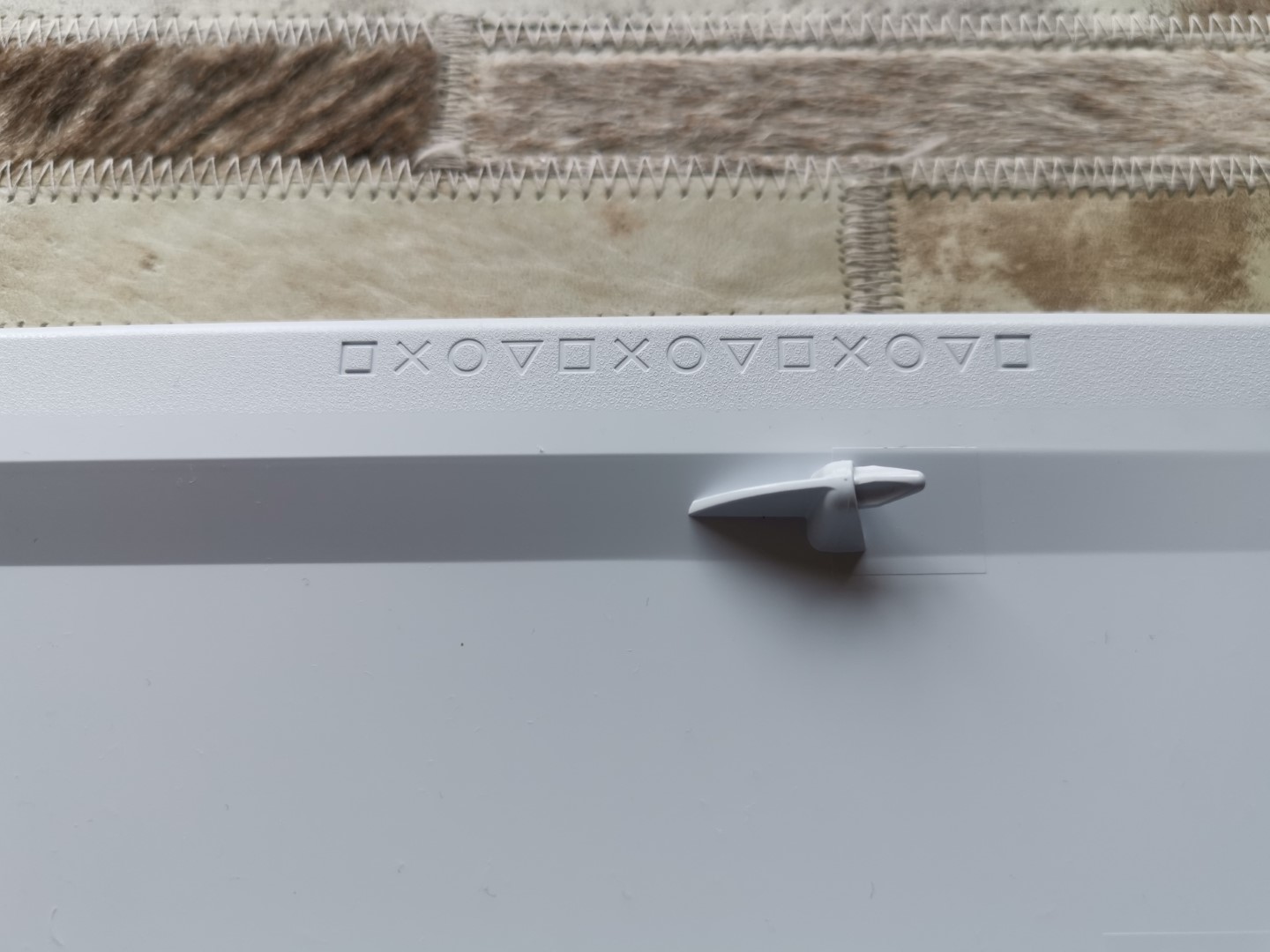 Once done, you remove remove the spacer screw, insert the NVMe SSD and replace the screw to suit the sizing of your drive. After the drive has been installed, you place the protective metal cover over the slow and then put the bottom cover back onto the console. When you first power the PS5 after the install, the operating system will prompt you to format the M2. SSD, including you a read speed and how to move games to the WD_BLACK SN850 NVMe SSD (Settings, Storage, Installation Location or select move from the options menu of each game. 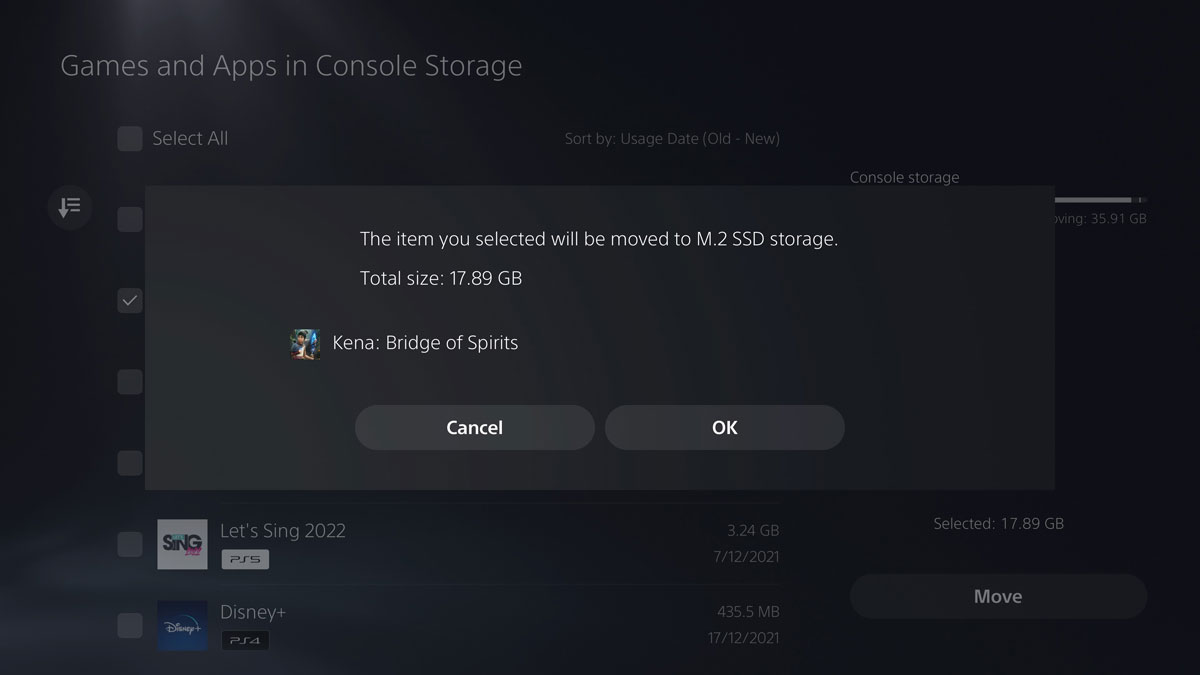 In terms of performance on the PS5, we had no issues whatsoever and all games were super fast and responsive, just like the stock PS5 drive. Whether it was Marvel’s Guardians of the Galaxy, Kena: Bridge of Spirits or Battlefield 2042, everything worked a treat but more importantly, we had space to spare!

If you’re looking to increase your hard drive space on your PS5, then the WD_BLACK SN850 NVMe SSD is an affordable option but best of all, installation is easy and more importantly it burst the 825GB bubble of the stock PlayStation 5 drive. 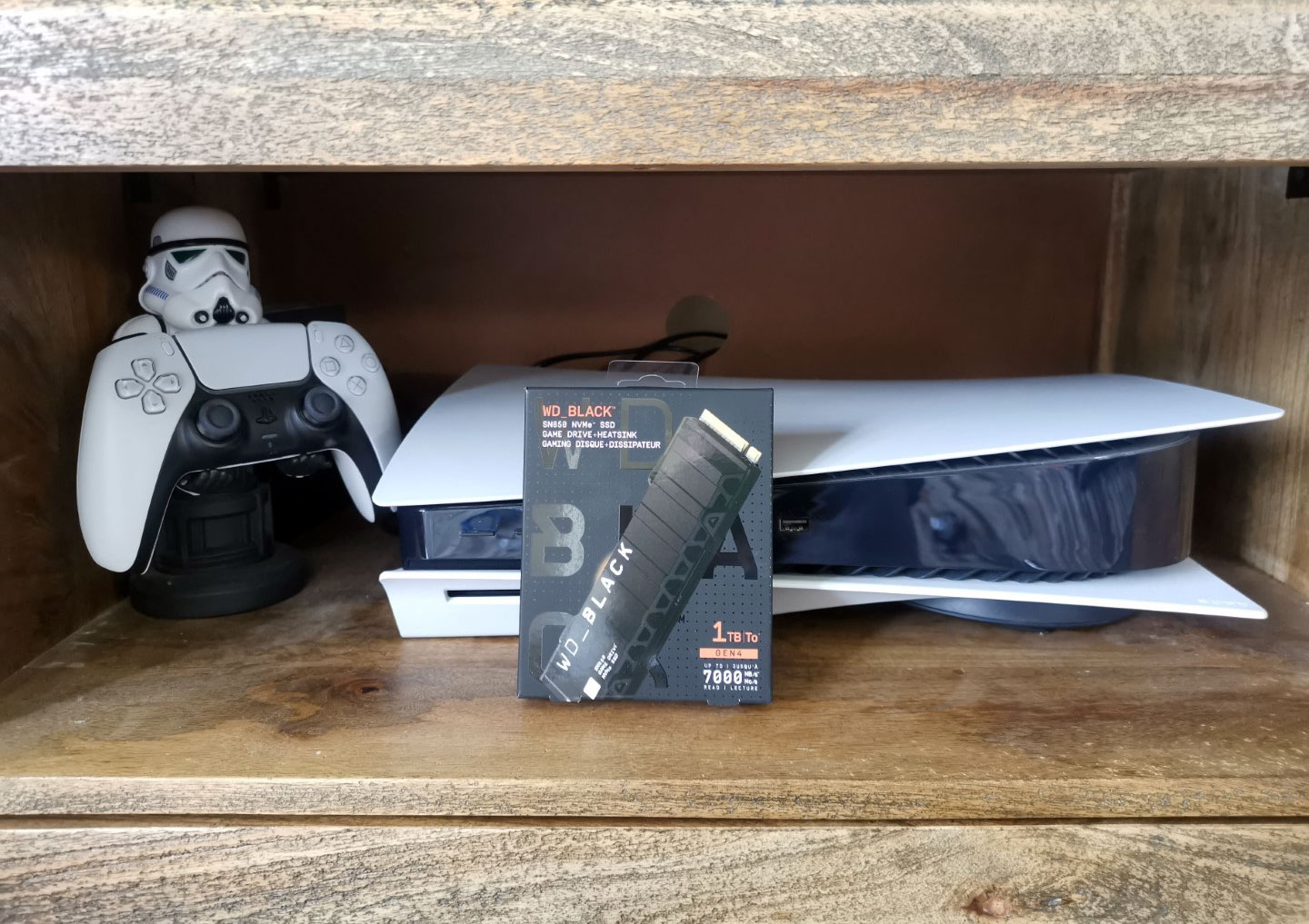