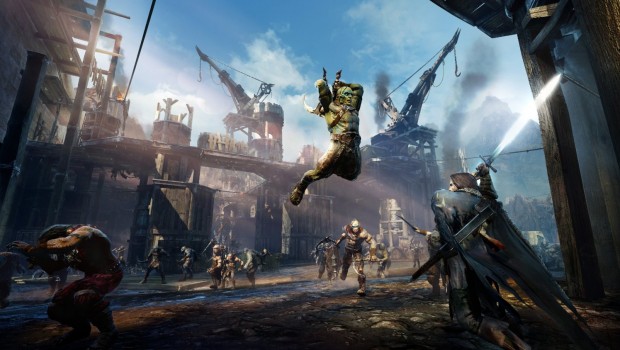 SYDNEY, Australia. — Oct. 8, 2014 — Warner Bros. Interactive Entertainment (WBIE) and Monolith Productions announce that Middle-earth: Shadow of Mordor will be available today in stores and on digital console in Australia, and is already available on Steam. Middle-earth: Shadow of Mordor is a third-person, open world action game that introduces players to the next epic saga of Middle-earth as they embark on a dark journey through Mordor, set between the events of The Hobbit and The Lord of the Rings. Featuring the innovative Nemesis System, the game is available at retailers and via digital download for PlayStation®4 computer entertainment system and Xbox One all-in-one games and entertainment system from Microsoft for the suggested retail pricing of $99.95 and on Windows PC for $79.95.

In Middle-earth: Shadow of Mordor players become Talion, a Gondorian Ranger of the Black Gate who is slain alongside his family on the night of Sauron’s return to Mordor. Resurrected from death and inextricably linked to a Wraith Spirit, Talion ventures on a quest of vengeance and discovery to unearth why he has been denied the peace of death. Players uncover the mystery behind the Spirit that compels him, discover the origins of the Rings of Power and confront their ultimate Nemesis.

The game introduces the innovative Nemesis System, through which every enemy encountered in Middle-earth: Shadow of Mordor is procedurally generated and unique to each player, from appearance, to personality type, to strengths and weaknesses, to distinct enemy missions. Players will use Talion’s Wraith powers to manipulate and corrupt the wills of enemy Uruks and gain power to raise their own army in order to match Sauron’s forces on the field of battle.

“Monolith’s goal with the Nemesis System is to push the action genre forward with a unique gameplay mechanic that allows the player to experience Middle-earth in a way that is deeply personal,” said Martin Tremblay, President, Warner Bros. Interactive Entertainment. “The team and technology powering the Nemesis System helped us develop an emotional investment between each player and their enemies, which creates a truly memorable gaming experience unlike anything that’s been done before.”

Earning more than 45 awards and nominations at E3 2014, including “Best of E3” from GameSpot.com, Middle-earth: Shadow of Mordor tells an original story that aligns authentically within the Middle-earth canon. On their journey into the Black Land, players will encounter familiar faces that help them along their path, including Gollum and other notable Middle-earth characters.

All players of Middle-earth: Shadow of Mordor will receive access to the Dark Ranger Pack upon purchase, including The Dark Ranger Character Skin and the “Test of Power” Challenge mode, where gamers demonstrate their strength in combat as they bring down an exclusive legion of Sauron’s forces and display their best score on the challenge leaderboard.  The Season Pass for Middle-earth: Shadow of Mordor, priced at $36.95, provides all new story missions and a new playable character, plus exclusive access to the ‘Guardians of the Flaming Eye’ Orc Warband mission and early access to The Trials of War. These include the Test of Speed Challenge Mode, Test of Wisdom Challenge Mode and Endless Challenge Mode, as well as the ‘Lord of the Hunt’ and ‘The Bright Lord’ story missions. Players will also receive additional content not yet announced.

For those playing on PlayStation®4, there are two exclusive missions available: the Blood Hunters and Flesh Burners missions. For more information on this live content, visit www.shadowofmordor.com.