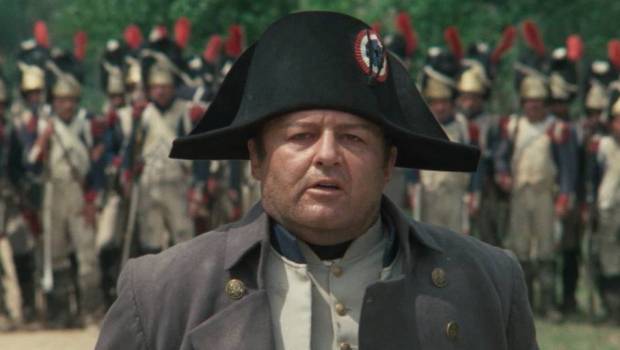 Summary: Waterloo is brought to vivid life by brilliant performances from Steiger and Plummer, and a wonderful director in Sergei Bondarkchuk, who makes fantastic use of location shooting.

The events leading up to the Battle of Waterloo in 1815 have been endlessly hashed over by military historians of all stripes in the two centuries since several European armies came together to clash over that continent’s future. Here, director Sergei Bondarkchuk, working from H.A.L. Craigs script, presents that clash on the broadest possible canvas.

Everything about Waterloo is big – Steiger’s Napoleon is a megalomaniac who refuses to see the writing on the wall in the lead up to his first exile, and like Hitler did in the bunker, is moving non-existing armies around a map as the allies draw closer to Paris. His exile to Elba is dispensed with in a matter of moments, before the film jumps to his return to Europe and his inevitable return to power in Paris. From there, it is a downhill ride to that immortal confrontation in Belgium between the forces led by the Duke of Wellington.

Plummer’s Wellington brings to life the fabled Iron Duke, a man happy to lash his own men for any infraction. But he inspires as much as he creates fear, and the ease with which he transitions from a man attending a ball, to a general marshalling his officers to march out and confront Napoleon’s forces, demonstrates Plummer’s craft as an actor.

Amusingly, for a movie that depicts the toppling of a dictator and the freedom of Europe, much of the funding for Waterloo came from the Soviet government. Indeed, almost 20,000 Soviet soldiers were provided to help flesh out the movie’s armies, and the location of the various battles were in Ukraine, then a Soviet dependence.

Bondarkchuk’s approach to the movie, as I said before, is on a broad canvas. But there are moments of real intimacy, as he goes inside Napoleon’s head for the great general’s thoughts. It shows the megalomania and also doubt, as Napoleon’s fate rides on the roll of the dice that is Waterloo. Of course, we all know that while the battle as a close run thing, it proved to be the decisive end of Napoleon’s pretensions to rule Europe. Afterwards, the European allies wouldn’t make the same mistake twice, this time exiling Napoleon to St Helena, off the west Africa coast.

Waterloo looks fantastic – the wide open vistas of the Ukraine wheatfields do double duty as the battlefields of Europe. There are some great night shoots during pouring rain. The scenes of battle are as chaotic and lethal as they were in real life. Bondarkchuk demonstrates that chaos in wide shots and closely framed sequences as men struggle to survive the bloodbath that ended twenty five years of war on the Continent.

Orson Welle’s is delightful in his few scenes as Louis XVIII, a dissolute pleasure seeker who is hurried offscreen at news of Napoleon’s return. But the heart of Waterloo lies entirely, and appropriately, on the towering performances of the two leads. Plummer’s upright Wellington is less instantly appealing than Steiger’s grandiose Napoleon, though there is an element of playfulness in Plummer’s performance that is pleasing to watch. Steiger encapsulates Napoleon’s boundless energy and ambition within a framework of risk taking and anxiety, which humanises the character to an extent less skilful actors would’ve avoided.

In an era where the American war movie was filled with wise cracking character actors storming Nazi positions in search of lost gold, it’s pleasing to see a thoroughly European movie on our screens. The clean up on the print is first class, and the sound is great, capturing all the terrible sounds of war.

Fifty years later, Waterloo is something of a triumph, a classic movie from the classic era of filmmaking. I cannot recommend it enough. 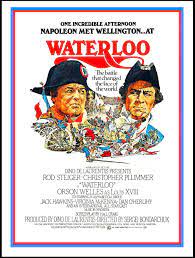