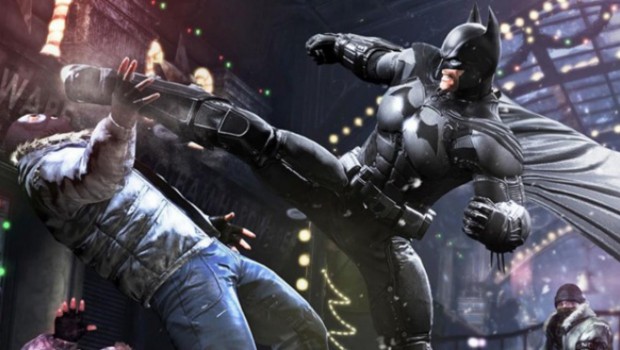 Developed by WB Games Montréal, Batman: Arkham Origins is based on DC Comics’ core Batman license.  The game features an expanded Gotham City and introduces an original prequel storyline set several years before the events of Batman: Arkham Asylum and Batman: Arkham City, the first two critically acclaimed games of the franchise.  Taking place before the rise of Gotham City’s most dangerous criminals, the game showcases a young, unrefined Batman as he faces the defining moment of his early career and sets his path to becoming the Dark Knight.

“It’s a big responsibility taking on the Batman: Arkham franchise and the WB Games Montréal team has dedicated itself to giving players an experience that is worthy of the name,” said Reid Schneider, Vice President and Executive Producer, WB Games Montréal.  “Batman: Arkham Origins allows fans to play through a new take on Batman’s story while experiencing some enhanced game-play mechanics.”

Batman: Arkham Origins features a pivotal tale set on Christmas Eve where Batman is hunted by eight of the deadliest assassins from the DC Comics Universe. Along the way, players will experience a fresh take on iconic Batman characters, including The Joker, Black Mask, Penguin, Deathstroke, Bane, Deadshot, Copperhead and others yet to be revealed.

Also new to the franchise is the online multiplayer mode, which is developed by Splash Damage. Friends and foes can play online in 3v3v2 gameplay that blends traditional Arkham gameplay with third-person shooter mechanics.  Gamers can hunt as Batman or Robin against the most challenging opponents yet – friends and other online gamers – or take a walk on the dark side as a Super-Villain Elite and be part of The Joker or Bane’s gang.  Those playing as a Super-Villain Elite will also have a chance to seize control of either The Joker or Bane for a limited amount of time.

Players looking to extend their gameplay experience can buy the Batman: Arkham Origins Season Pass now for $29.95 and receive $40 worth of content.  The Season Pass is comprised of five of the game’s upcoming downloadable content packs, which includes two exclusive skins, as well new content from the Batman Arkham Initiation Pack and a separate all-new story campaign.  The Initiation Pack content tests Bruce Wayne’s skills of detection, evasion and confrontation among the mysterious temple high in the Paektusan mountains of Korea, where his greatest teacher, Grandmaster Kirigi, is holding a final class.  The Season Pass is available on the PlayStation®Network, Xbox Live online entertainment network from Microsoft, Nintendo eShop and Steam.

The Batman: Arkham Origins free-to-play mobile game, developed by NetherRealm Studios for iPad, iPhone and iPod touch, is available on the App Store and delivers the stunning graphics and quality gameplay fans have come to expect from the team who brought to market fan favourite mobile games Injustice: Gods Among Us and Batman: Arkham City Lockdown.  The title pits players, as Batman, against a number of DC Comics’ most deadly assassins as they fight their way through Gotham City’s most dangerous locales.