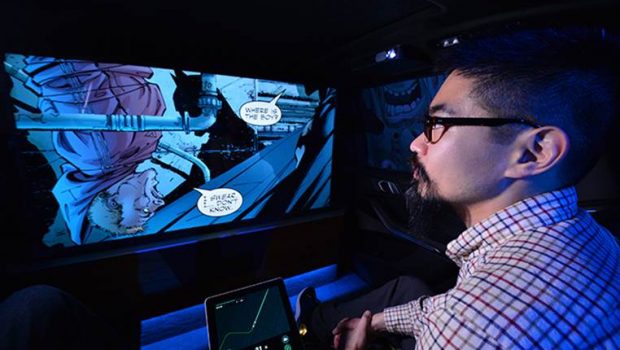 What’s New: Intel and Warner Bros.* demonstrated exciting potential for immersive entertainment in an autonomous driving world with a first-of-its-kind concept car at CES 2019. The car transports guests to Gotham City, home to DC’s most popular super hero, Batman. Through a virtual ride and 270-degree entertainment, the vehicle delivers on a commitment the two companies made at the LA Auto Show in 2017 to explore the potential for next-generation entertainment in future autonomous vehicles. More: Intel at CES 2019(All Intel News)

“The emergence of autonomous vehicles portends a major shift in how people use their time. The concept car shows how cars will become a new kind of ‘space.’”
–Marcie Miller, Automotive Strategic Marketing, Intel Corp.

How It Works: The interior of the Intel Warner Bros. autonomous vehicle, a retrofitted 2019 BMW X5, is equipped with advanced technology, a large-screen TV, projectors, mobile devices, sensory and haptic feedback, and immersive audio and lights to bring passengers on a virtual ride moderated by Batman’s trusted butler, Alfred Pennyworth. Upon entering the vehicle, guests experience the future of in-cabin entertainment while becoming familiar with safety measures in place through five “chapters”:

Intel CES 2019 B-Roll video includes a demonstration of the BMW X5 outfitted by Intel and Warner Bros. that offers passengers a taste of what’s to come in automotive entertainment in autonomous vehicles. See it at the 55-second mark. (Credit: Tim Herman/Intel Corporation)

Why It Matters: Intel predicts the coming “Passenger Economy” will free more than 250 million hours of commuting time per year in the world’s most congested cities. What’s more, Intel predicts a total addressable market of $200 billion from rising consumer use of new in-vehicle applications and content. As leaders in their respective fields, Intel and Warner Bros. are pioneering innovative research and development to explore how consumers interact with new forms of entertainment within vehicles once they are uncoupled from the steering wheel.

By transforming the cabin into an immersive entertainment platform, the companies are scratching the surface of the possibilities that will come with the future Passenger Economy.

Beyond reimagining in-car entertainment, the car includes interactive communications to keep riders informed and comfortable, while also demonstrating in real-time how Intel’s RSS model can help keep them safe.

Both companies believe consumer trust is critical for advancing autonomous vehicles. In order to create trust, autonomous vehicles must address a core set of interactions that engender confidence, control and a sense of safety. Intel is already helping address public trust by offering RSS to the broader automotive industry as a safety standard starting point. The Intel-Warner Bros. concept car demonstrates how content that is entertaining and informative has the power to help build trust while keeping passengers engaged.

Intel’s and Mobileye’s Role: Unlocking our autonomous future requires innovation in the areas of computing, safety and mapping. Together, Intel and Mobileye are delivering the full breadth of world-class technologies and products needed for this next era.