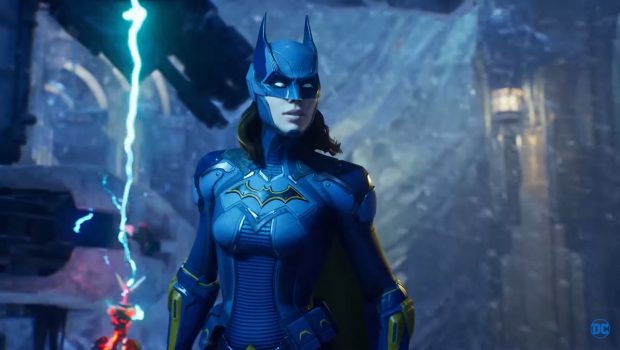 Warner Bros. Games and DC announced that Gotham Knights, the new open-world, third-person action RPG (role-playing game), is now available for PlayStation®5 (PS5™), Xbox Series X|S and PC and is playable either solo or as a two-player online* cooperative experience.

Developed by Warner Bros. Games Montréal, Gotham Knights features Batman Family characters – Batgirl, Nightwing, Red Hood and Robin – a new guard of highly trained DC Super Heroes who must rise up as the protectors of an increasingly vulnerable Gotham City in the wake of Batman’s death. Introducing an original story set in DC’s Batman Universe, players must solve mysteries that connect the darkest chapters in the city’s history, while engaging in epic confrontations and encounters with notorious DC Super-Villains, such as the cold-blooded Mr. Freeze, mastermind criminal influencer Harley Quinn, shape-shifting colossus Clayface and the mysterious Court of Owls, a secret society made up of Gotham City’s wealthiest families.

“We are thrilled to launch Gotham Knights and return players to Gotham City to play as the iconic DC Super Heroes Batgirl, Nightwing, Red Hood and Robin,” said David Haddad, President, Warner Bros. Games. “Our development team at Warner Bros. Games Montréal has created a rich, multi-layered story, coupled with compelling gameplay and iconic villains for fans to engage with.”

“We’re honoured to be able to tell a new story centred around our four heroes – Batgirl, Nightwing, Red Hood and Robin,” said Patrick Redding, Creative Director, Warner Bros. Games Montréal. “Gotham Knights is the culmination of the hard work by the entire Warner Bros. Games Montréal team to deliver a unique gameplay experience that transports players into the roles of these characters, whether playing solo or with a friend in online co-op and bring to life some of the most infamous DC Super-Villains in new ways. We’re thrilled to finally share Gotham Knights with fans around the world.”

In Gotham Knights, players will patrol the dark streets of five distinct boroughs in a dynamic, interactive Gotham City using a variety of traversal abilities and heroic combat moves, as well as the iconic Batcycle.

As Batgirl, Nightwing, Red Hood and Robin progress, their distinctive gameplay skills will evolve, along with an increasing arsenal of gadgets, gear and abilities. Each member of the Batman Family is also able to unlock special co-op take-downs and abilities such as healing or buffing teammates. Players will be able to stop crimes and explore the open-world in untethered two player online co-op. Experience, loot and story progression will carry over for the host, so players can play through the game entirely in single player or co-op mode or choose to have a friend join their session periodically.

The four playable heroes in Gotham Knights include:

Additionally, players can also look forward to the upcoming Heroic Assault mode, a new co-op experience that will support up to four gamers and will be available as a free update for all Gotham Knights owners on Nov. 29, 2022. This standalone mode is separate from main story campaign and provides a dedicated arena-like environment with specific objectives to complete and enemies to defeat on each floor, with 30 action-packed floors in total.

Fans can read more about the Gotham Knights backstory in DC’s official six issue prequel series Batman: Gotham Knights – Gilded City. Written by Gotham Knights story consultant Evan Narcisse with art by ABEL, the series debuts Oct. 25, 2022. Each physical issue will include a code for a redeemable in-game item, and issue No. 1 will include a code for an exclusive BOSO22 Batcycle skin. Subscribers to the DC UNIVERSE INFINITE digital subscription platform will also receive each issue day and date with its print counterpart and is the only digital path to receiving the in-game items. The platform includes a wide-ranging selection of stories featuring all of the Gotham Knights videogame characters. For more information, fans can check out DCUniverseInfinite.com. Please note, DC UNIVERSE INFINITE is not intended for children and is not available in all countries.