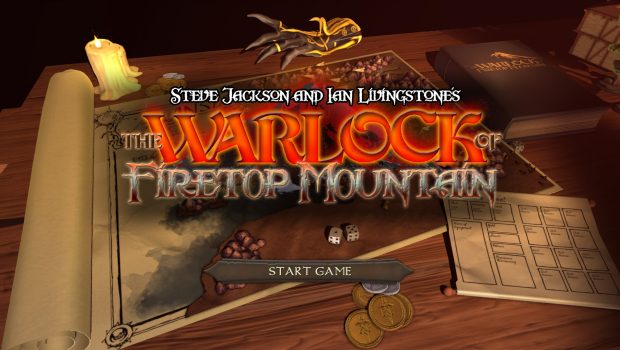 Summary: Choose your own adventure meets D & D without the ability to keep your finger in the choice page to find out if you want to take back your move.

Growing up in the 1980’s and 1990’s books took on a whole new level of entertainment. For the majority of people the Choose Your Own Adventure books grabbed their imaginations and made them feel part of the action… turn to page 132 to take the left path, or turn to page 15 to take the right path. But there were some people who saw how things could be even more interactive… even more engaging. Enter Steve Jackson and Ian Livingstone. Taking the Choose Your Own Adventure book style and adding another layer of interaction by giving the reader a character sheet (sorry to all the trees that were taken too soon so that I may have photocopies of my character sheets)… then add dice and you have a whole new way to enjoy reading.

Now much like the Choose Your Own Adventure books… a popular way to read Steve Jackson and Ian Livingstone books was to keep a finger in the choice page and see what your selection results in… if you didn’t like the result, you’d simply go back and choose the other page… or so I heard. ;) 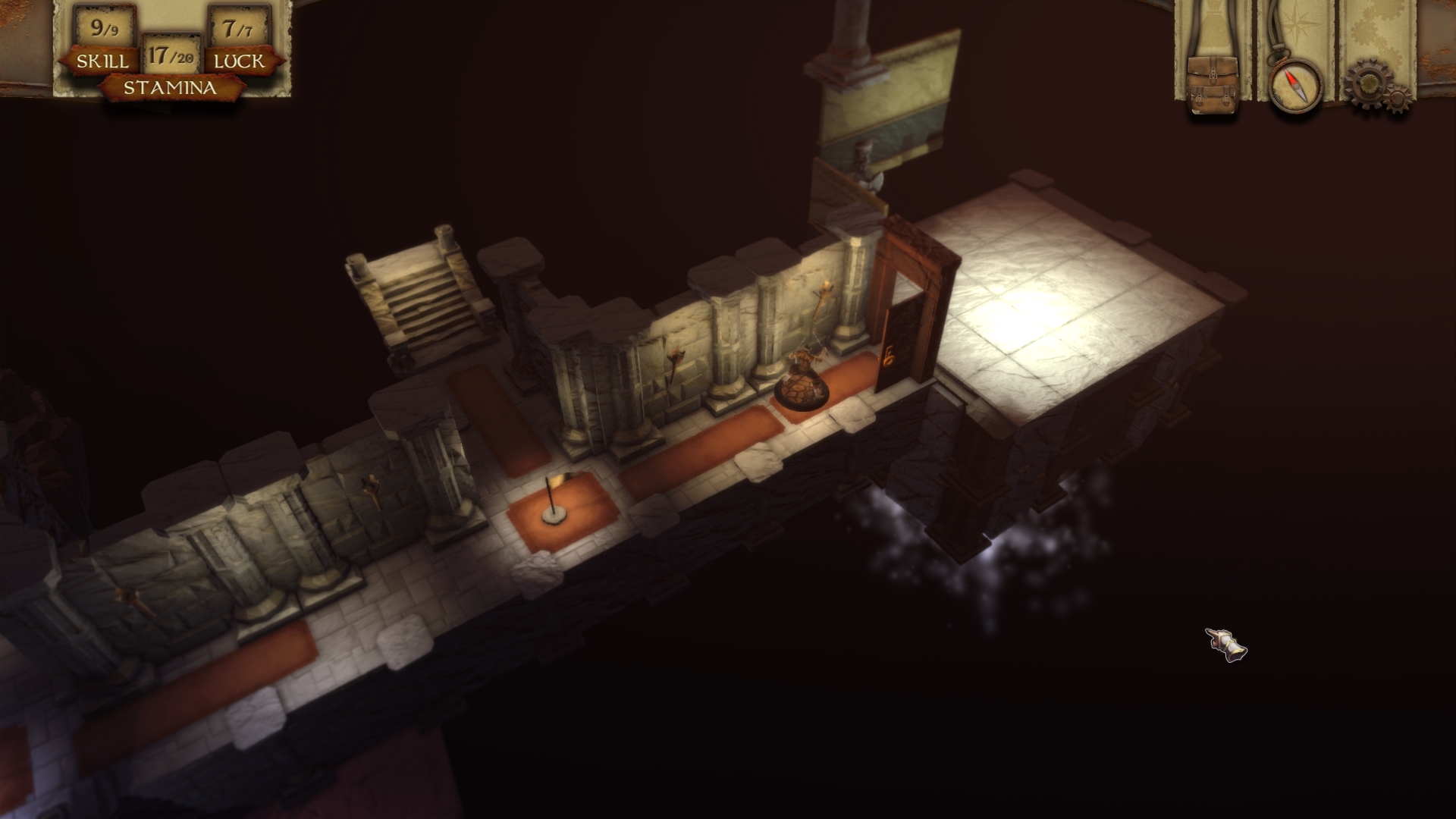 Flash to the present and Tin Man Games has created a digital version of The Warlock of Firetop Mountain which is the first book in the fighting fantasy series that Steve and Ian created. It’s a long time since I read/played any of their books and had totally forgotten about the character sheets, so it was with a great dose of nostalgia that a grin crossed my face as the main screen of the game flashed on the screen… I was suddenly a young boy again, pencil in hand ready to take on what adventures lay ahead.

Before you embark on your quest you get to chose you character… there are a handful of characters available to begin with and more can be unlocked via souls that you acquire throughout the game. More characters will also be added in future updates. Now it’s important to note here that whilst the main differences in characters appears to be simply stats and type (ie archer, warrior etc), there is more to your selection. My first play through I just happened to select a character that was known to a prisoner I later released. My second play through that same prisoner didn’t recognise my character and so the interaction was much less personal. It’s a small touch but it does add to the re-playability and the sense that Firetop Mountain is much larger than just one adventurer’s story.

Visually the game is simple but effective… it’s almost what you might imagine a D & D board game would look like set up, but with a bit more “set building”. Your player travels around much like a Sabbuteo figure.

Those familiar traits of Luck and Skill and such no longer have to be tracked on paper though, we now get to save the trees and let the computer keep track of it all. The same goes for the fear of losing dice with the game keeping them nice and safe for us… each combat move that results in a clash requires a dice roll and you can either go simply with your first roll or, as the die are bouncing about, you can click and rattle them for a different result. Aforementioned combat is played out on a small gridded battle field with forward, backward, side to side and diagonals all being possible strike directions (which is important to remember). 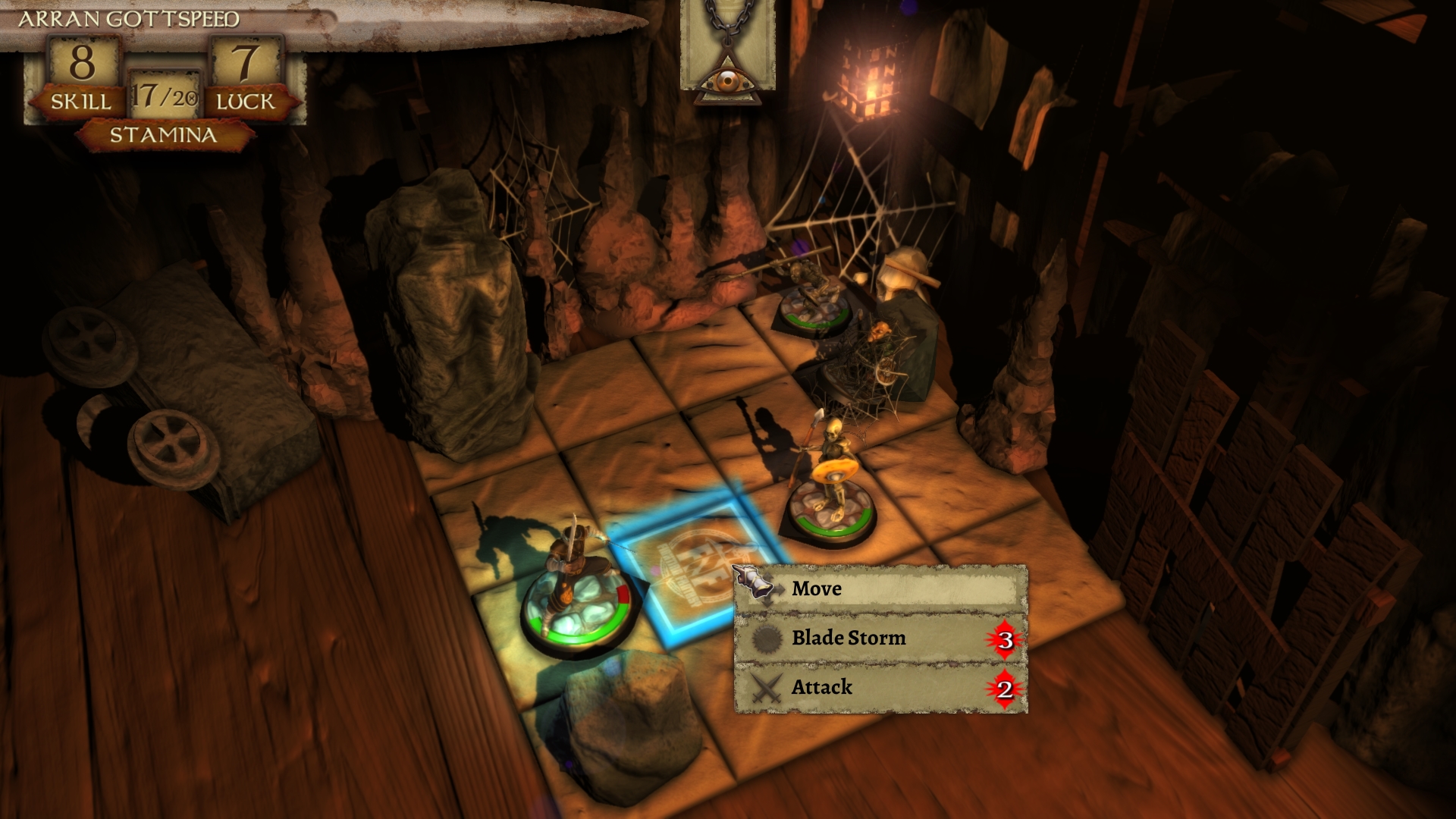 As much as the main story gives you a clear task… the fun is in the exploring (and sometimes exploring provides you with things that might make the main quest easier). There is a lot to explore here and it’s easy to get lost (maybe we do still need some paper to make our maps). You no longer have the ability to keep a finger in a page to take back a choice… but you are given a resurrection option (limited use) that will take you back to the last bench you rested at (which can be a long way back)… it’s a slight throwback to the old paper days but a little more limiting (if more honest). 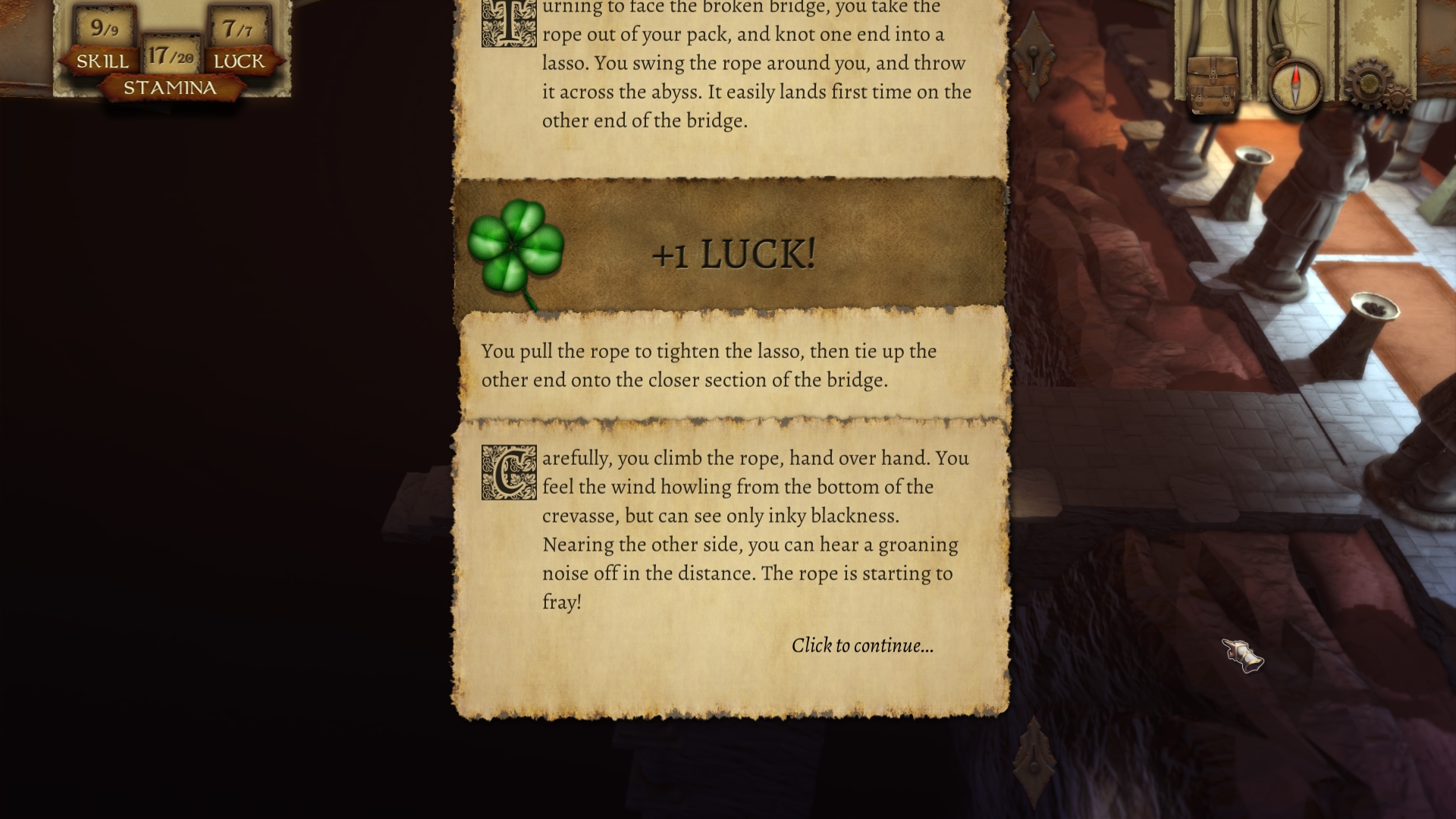 There is a lot here for those of us prone to nostalgia and the core mechanic is well set for future adaptations. If you loved the book series then you will no doubt be charmed by this game… There are lots of different characters to play through with… but you will find the first few rooms a bit repetitive after a while.

A fun throwback game with some modern twists. A bit of fun but maybe best to wait till it’s a on special (or if they do release other books adaptations then a collection of those together would be a great choice).