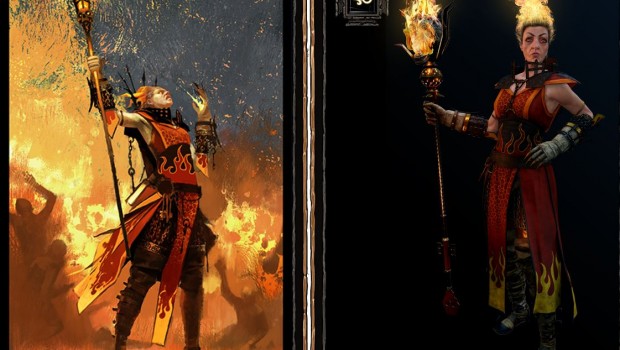 “We Pyromancers are quick to anger and those that provoke us would do well to remember that fire is the great leveller. For everything burns – wood and stone, kings and priests, the rich and the poor.”

Independent developer Fatshark today released new details of the last of five playable heroes in Warhammer: End Times – Vermintide. Sienna Fuegonasus is a fiery tempered Bright Wizard who wanders the land in a constant search for opportunities to indulge herself in the ecstasy of pyromancy.

Blessed with a sharp intellect and a wicked sense of humor, Sienna will pass as as well-adjusted individual, as far as wizards go. Those who witness her in battle will soon get a glance of how deep her dependency of the adrenaline rush of pyromancy can take her. The Bright Wizard arrives at Ubersreik as a prisoner of the Witch Hunter, Victor Saltzpyre and guarded by the Empire Soldier, Markus Kruber. A trial awaits, however a different kind than they all have expected.

In Vermintide, the city of Ubersreik is under siege as players select from a band of five heroes with different play-styles and abilities, all equipped with unique gear and personalities. Working together cooperatively, players must use their individual attributes to survive an apocalyptic invasion from hordes of relentless, power hungry Skaven, across a range of environments stretching from the top of the Magnus Tower to the bowels of the Under Empire.

For more information about the Bright Wizard: http://vermintide.com/bright-wizard/