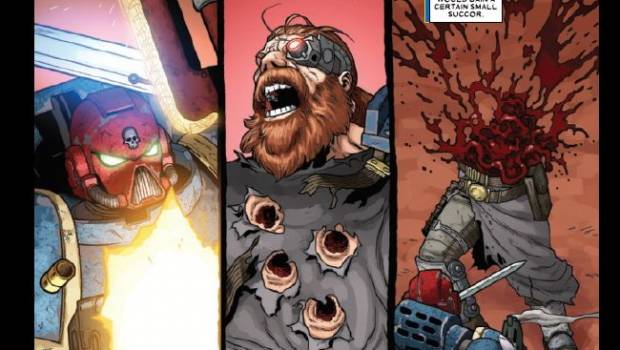 Summary: If you are a die-hard Warhammer 40k fan and have to get everything mentioning it maybe. Everyone else...eh.

BLOOD FOR THE BLOOD GOD!

Warhammer 40K always seemed like something for the ultra-nerds who were shunned by the other nerds and there is already a series of books based on it and a fan-film Astartes. It is not really as marketable as something like superheroes or Star Wars and does have a very niche fan base.

As the universe it is based in is so large by this point this series chooses to focus on just one group of Ultramarines and their commander. This particular story is about an incident in his past that led him to being part of the army of the Emperor.

It is very violent but it does seem like over the top cartoon violence aimed at teenage boys. Not sure who they are aiming this at except for people who are already fans of the series and they have a lot of stories already.

Having your own adventures in table-top gaming is always better than reading someone else’s story so maybe save this one for when you are not playing.

Not really sure who to recommend this to unless you are a 40K completist. There are already a lot of other fantasy and war comics you can get that would be better if you just have an interest in passing.