Summary: It's like chess but not, a combat chess feel, with a good slathering of Warhammer 40,000 to make it all awesome.

This turn-based strategy video game developed by Hammerfall Publishing seeks to engage us with bloody battle between Space Marines and Orcs set in the Paper and Pencil RPG by Games Workshop’s excellent series Warhammer 40,000. Warhammer 40, 000 Regicide brings us an almost hybrid kind of battle chess feel, giving players a 50 mission campaign and also online multiplayer options with the standard and expected online rankings and progressions.

There are two modes in the game, both of which are surprisingly enjoyable and can be played multiplayer or single player with some very violent finishing moves and animations to both reward or punish the player respectively depending on if they win or lose in a move. 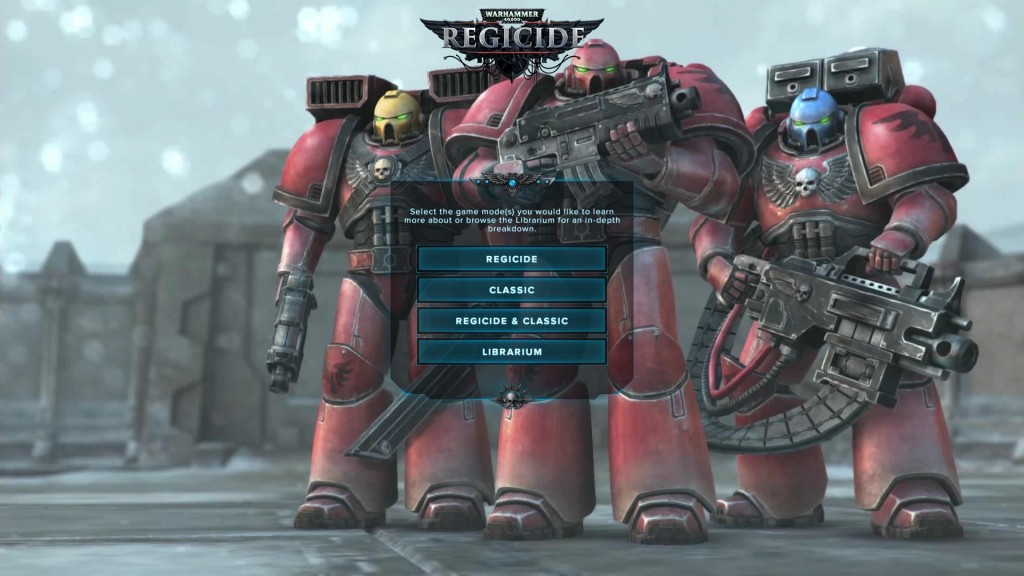 The two game modes are:

REGICIDE: This is a two phase combat style of gaming and the campaign part of the game. Players going through this can unlock new challenges, powers and abilities and even elite units.

CLASSIC: This mode of the game is based on traditional chess rules, battle it out online against opponents from all over the world in full cross platform multiplayer mode.

Furthermore, there are two races or factions if you will, the human Space Marines and then the barbaric Orcs who are just as dangerous as they look. There are eleven unlockable chapters and clans that can be played in the games multiplayer modes which adds to the replay factor. 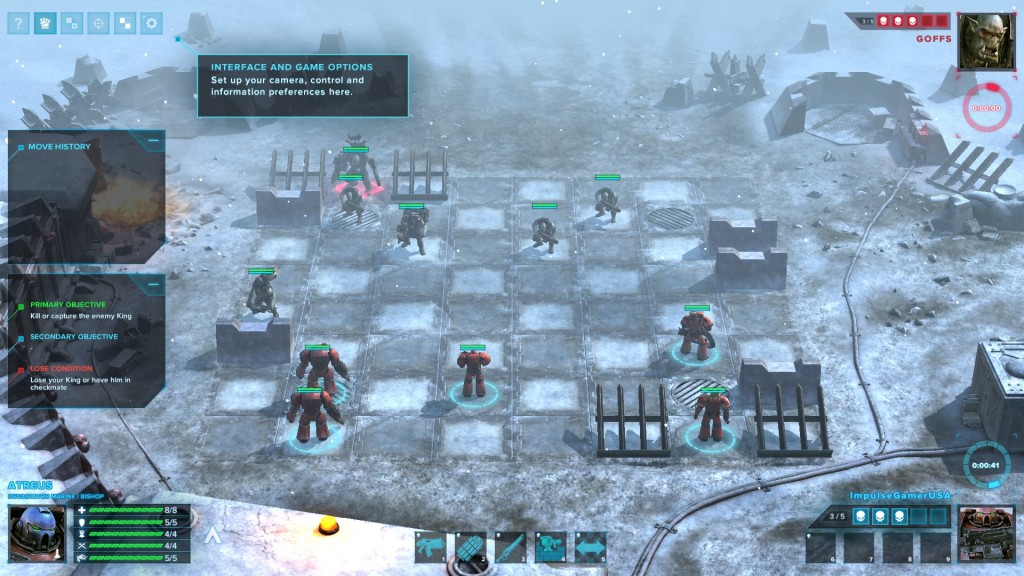 The campaign part of the game does have a story and it includes text and video CGI to move the story along and get the player’s blood pumping for the missions. Voice actors are passable enough and do get you in the mood. The lines they have to deliver are sometimes silly but the nonetheless the lines are delivered with appropriate commitment that sets the mood.

The campaign follows the Space Marines known as the Blood Angels and definitely goes beyond the original Paper and Pencil RPG and also pays homage to its design. The style of the armor and some of the accoutrements on the armor reminds me a lot of ancient Roman armies which is pretty cool.

With that said, the Blood Angels are campaigning on the frontier worlds of the Sargos Sector where things have once again gone wrong. A garrison that had been left on the capital world of Hethgar has gone silent, so enter The Blood Angels to make sense of it all, kick butt and not even care about taking names. 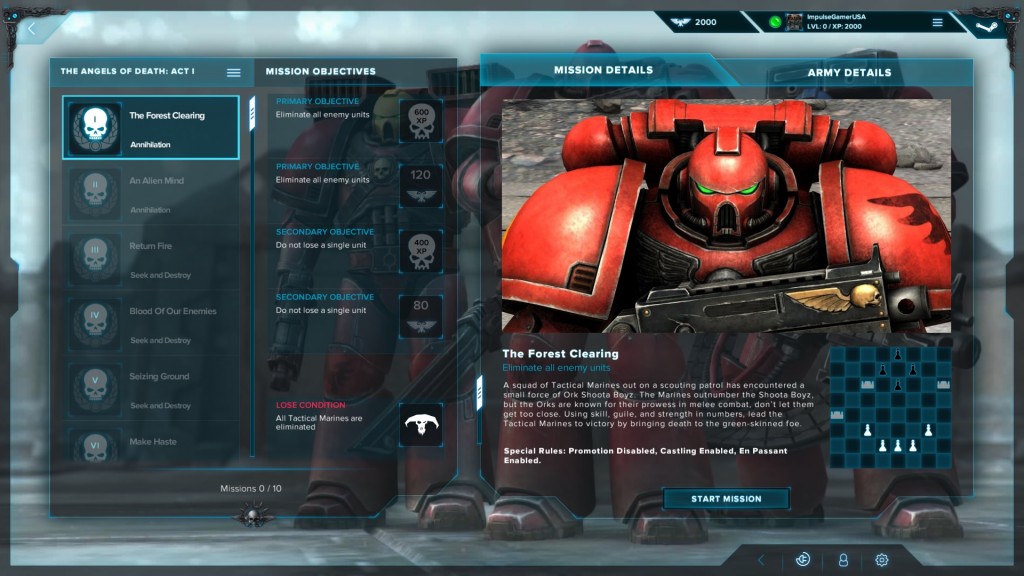 Now even though there is a campaign, the basics of battles pretty much remain firmly fixed in the concept of a chess board and turn based. So if you come to this looking for something like say Gears of War… keep right on moving. Though not innovative, the game is fun and grows on you and if you pass, you may be missing out on some fun here if you don’t give it a try.

The opposing sides work through phases of combat such as initiative, movement and attack. Some attacks and defenses can be boosted by some of the unit’s abilities. When it comes down to the attacks and taking out an opposing faction piece, the action can be very bloody and brutal. So it caters to a gamer’s blood thirsty side, while movement and planning caters to the tactician in a gamer’s soul. 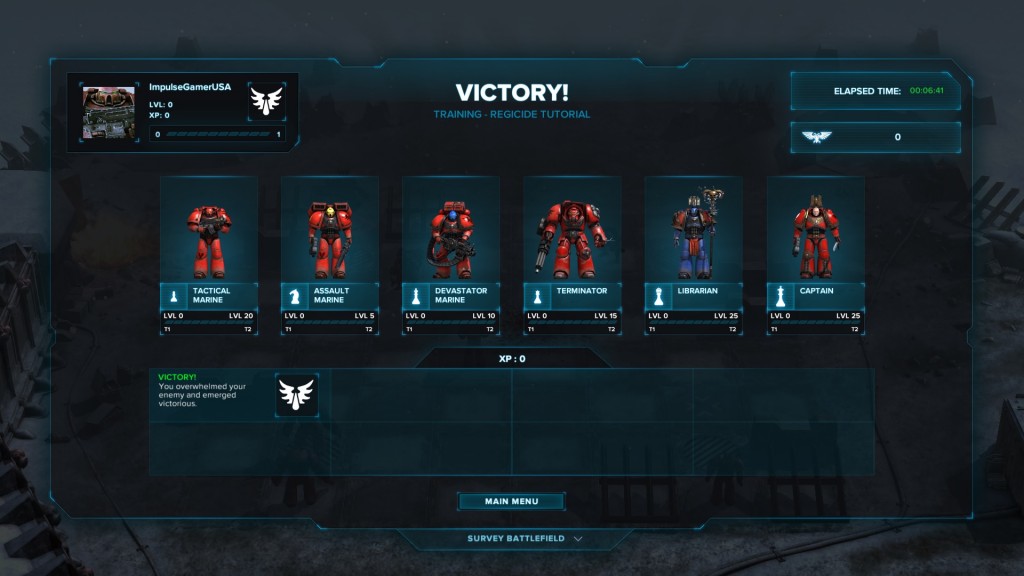 The learning curve for the game is eased by a tutorial that introduces the controls, how they work and what each window on the gaming screen does. As for the difficulty curve in game, new threats are introduced at appropriate times to give the player a little more of a challenge. After being comfortable in dealing with certain enemy unit types it does give one a bit of a thrill to face something new. 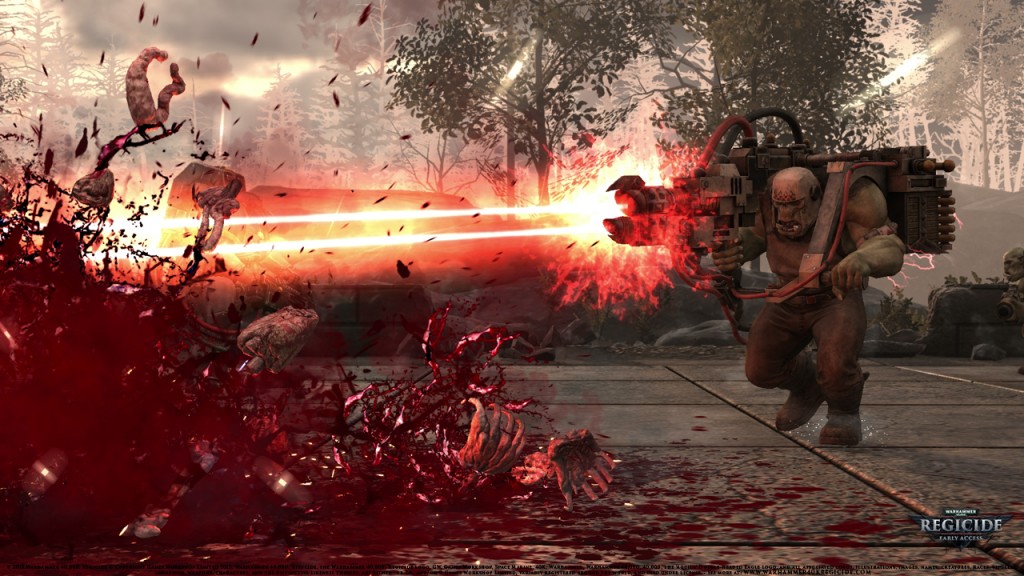 There are times that the enemy AI does odd things and just when you think one of your pieces is going to be taken out of the equation due to their health being so low and the enemy is in the very next square in front of them, they attack another piece at full health! Believe me it’s nice to have a stroke of luck given to you by an opposing pieces stupid move, but it almost takes the challenge out of things. When they fire and miss that’s one thing but when they ignore easy prey for a target that is several squares away…. that’s a totally different matter!

Even with the AI sometimes leaving you to scratch your head in wide eyed wonder at why they did what they did, Warhammer 40,000 Regicide is wickedly cool to play, with its tactical chess like playing and the campaign story that is just enough for a grand adventure to gear up the players interest which successfully ties it all together. In the end Warhammer 40,000 Regicide is worth playing and we hope to see some possible DLC in the future to expand and lengthen the life of this bloody surprise of a game.