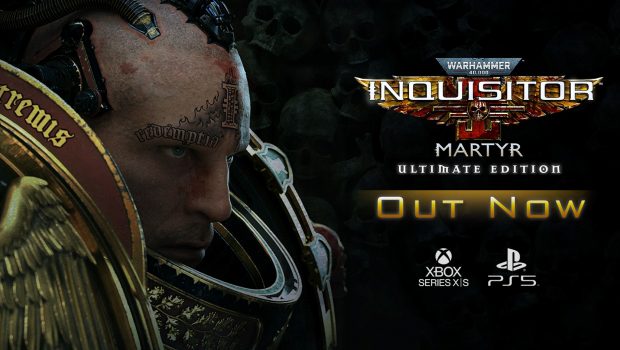 These features include the following:

The new playable class, announced back in 2021, is coming to PlayStation 4, PlayStation 5, Xbox One and Xbox Series S|X consoles as a DLC at a later date. The new Sororitas Class – an Inquisitor with a Sister of Battle background – will bring new mechanics and item types to Warhammer 40,000: Inquisitor – Martyr as well.

You are an Inquisitor, one of the most powerful agents of the Imperium. You operate in the Caligari Sector, a region overrun with heretics, mutants and Daemons of Chaos.

Warhammer 40,000: Inquisitor – Ultimate Edition, the first action RPG to be set in the Warhammer 40,000 universe, features both fast-paced and tactical combat, featuring multiple classes of the Inquisition who carry out the Emperor’s will. From destructible environments and a cover-based combat system, to skill trees and a wide range of vehicles and weapons, the game offers a truly unique experience.

Brutalize Chaos as a Crusader, summon deadly constructs as a Tech-Adept, take down abominations with guile and agility as an Assassin or fight fire with fire playing as a Psyker. In single player, two-player local co-op (exclusively on consoles) or four-player online multiplayer, you must enforce the will of the Emperor and cleanse the darkest sectors of the Imperium of heresy.

And since Warhammer 40,000: Inquisitor – Ultimate Edition was developed by a dedicated team for a passionate community of gamers who have been following the license for a long time, all players who own the game on PlayStation®4 and Xbox One will receive a 50% discount on the PlayStation®5 and Xbox Series S|X versions.