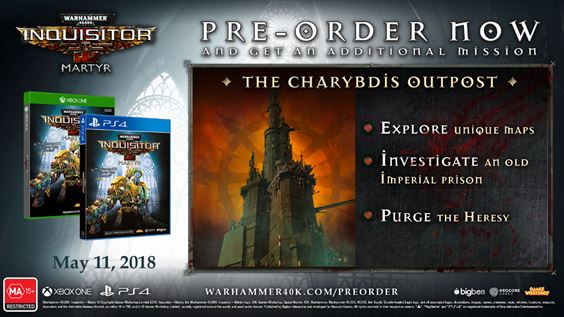 Sydney, 4th April, 2018 — Neocore and Bigben are revealing the bonuses for preorders and the different Xbox One and PlayStation 4 TM editions of Warhammer 40,000: Inquisitor — Martyr.

By preordering the console game right now in stores, players will have access to the mission Charybdis Outpost: an investigation offering several hours of extra gameplay in the heart of a run-down, ancient Imperial prison, with access to never-before-seen environments with unique characteristics.

Numerous other digital bonuses will be available for those that order the Deluxe or Imperium editions:

All of the Deluxe Edition bonuses.

While you’re waiting to take advantage of the bonuses in-game, check out this video revealing the numerous types of enemies, each more dangerous than the last, waiting for you, and how to use vehicles to take them out: