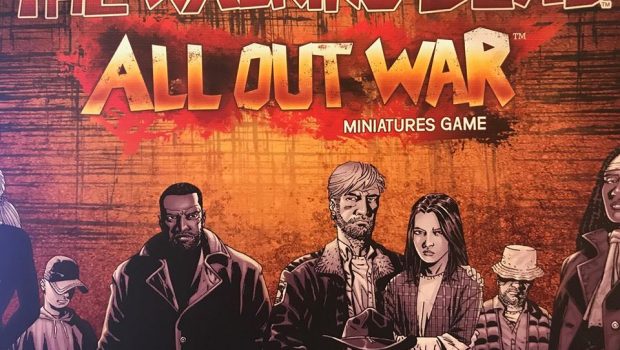 The Walking Dead: All Out War Miniatures Game Review

Summary: In a world where danger is ever-present, how will you survive?

All Out War is a fast-paced miniatures game set in the iconic world of one of the best-selling comic book series – The Walking Dead. You will experience first-hand the desperate struggle for survival faced by Rick and his companions in the zombie ravaged world; scrounging for gear and rations while negotiating threats and from both the living and the dead. 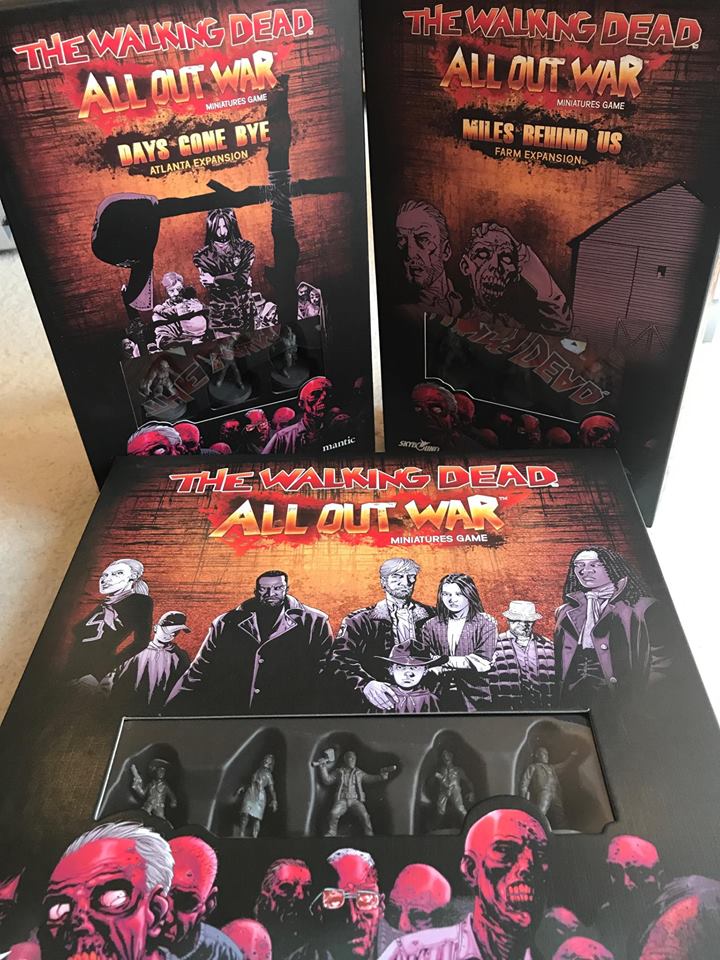 Games will last around half an hour to an hour and are best played with two players. This pits you against one another in the role of rival gangs. The game can be played solo (if you don’t mind having to fight the Walkers all off by yourself), but is certainly more enjoyable against a worthy opponent. The aim of the game is to collect valuable resources from the barren landscape before your rival does, or worse, before your group is devoured by the dead. Time is always of the essence, as with each turn the threat and number of Walkers increases, putting a great sense of panic into all your moves. Take too long and you will eventually be overwhelmed, but move too fast and you can find yourself alone and outnumbered.

The All Out War core set contains six unpainted grey survivors (Rick, Carl, Patrick, Liam, and Sandra) and twelve unpainted grey Walkers who are in various stages of decomposition. The survivors are split into two rival groups with each of them having their own individual characteristics, factions, abilities, and special qualities shown on their ‘Survivor Cards’.

All the miniatures are beautifully detailed but it is a bit hard to tell them apart as (from first glance) they all look the same being unpainted. In saying that though, it will be fun to get the paint out and give them all some life (even the Walkers). 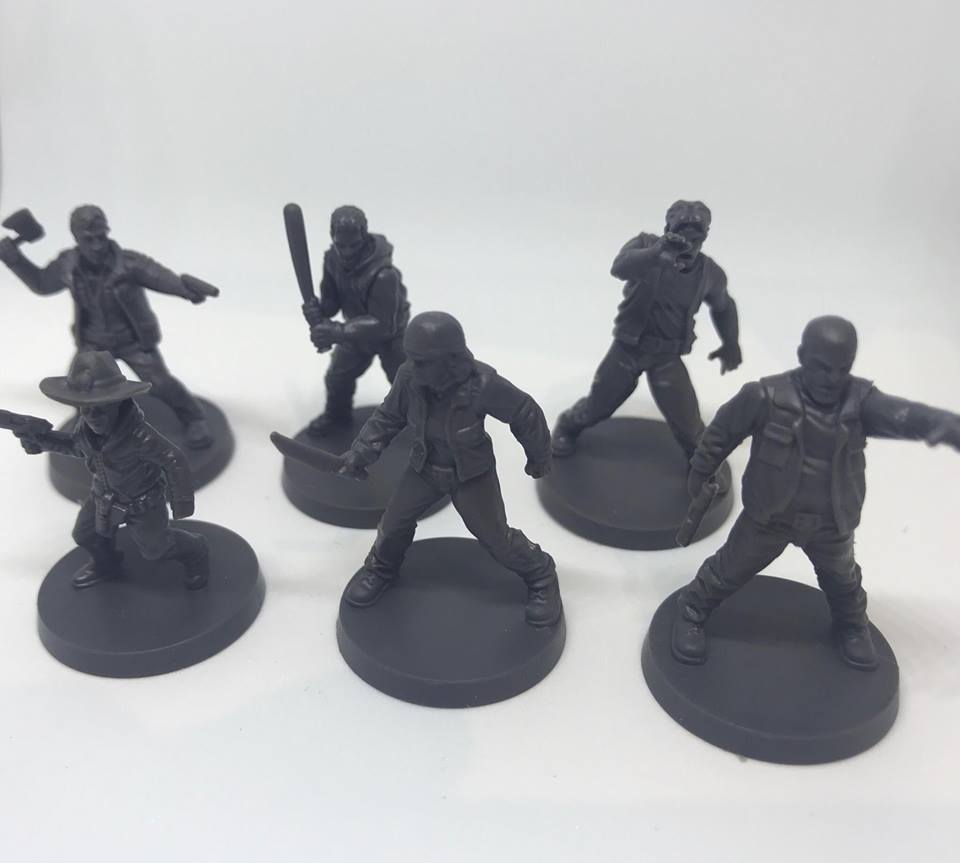 Each game you play is structured around a scenario, providing a variety of gaming set-ups, special deployments and victory conditions. A ‘Quick Start Guide’ is useful for players new to the game, and a more advanced rule book is available once you have a bit more familiarity, including extra actions and rules to take the game even further. Both rule books are easy to understand and follow, but unfortunately you are only offered a couple of generic scenarios until you purchase the expansion sets.

Once each survivor is equiped with their weapons and items they are then placed (along with the Walkers) on a paper gaming mat provided (which I never used because I couldn’t get the fold creases out), along with two dimensional scenery (cars and barricades), and supply counters (used as objectives to win the game).

There are four phases per turn – Action, Event, Melee, and End, and as the players move towards their objectives, “threat” will always be a key factor in the game. The constantly moving ‘Threat Tracker’ physically represents the mounting danger of fighting in Walker-infested environments. As it rises, the Walker numbers increase and become more dangerous, causing panic amongst your group, causing survivors to flee, and in most scenarios – eventually ending the game when the maximum threat level is reached.

The Walkers will enter the game at a fairly reasonable rate and their placement can result in the game changing pretty quickly. The ‘Kill Zone’ template (a deadly radius surrounding a Walker), will ensure you need to keep your distance, and any actions your survivors make that are loud, bright, or indiscreet, will create a noise – and we all know how much Walkers like noise!

A double sided ruler with all the common measurements marked is used for moving figures, measuring weapons ranges, and determining which zombies can hear any noises made by survivors. Different coloured dice are included and used for a variety of different actions from combat, to luck, to panic. The only problem I had with the dice were that some of the game specific symbols were not clear, but that is only a minor flaw, as you quickly get used to them and their functions. 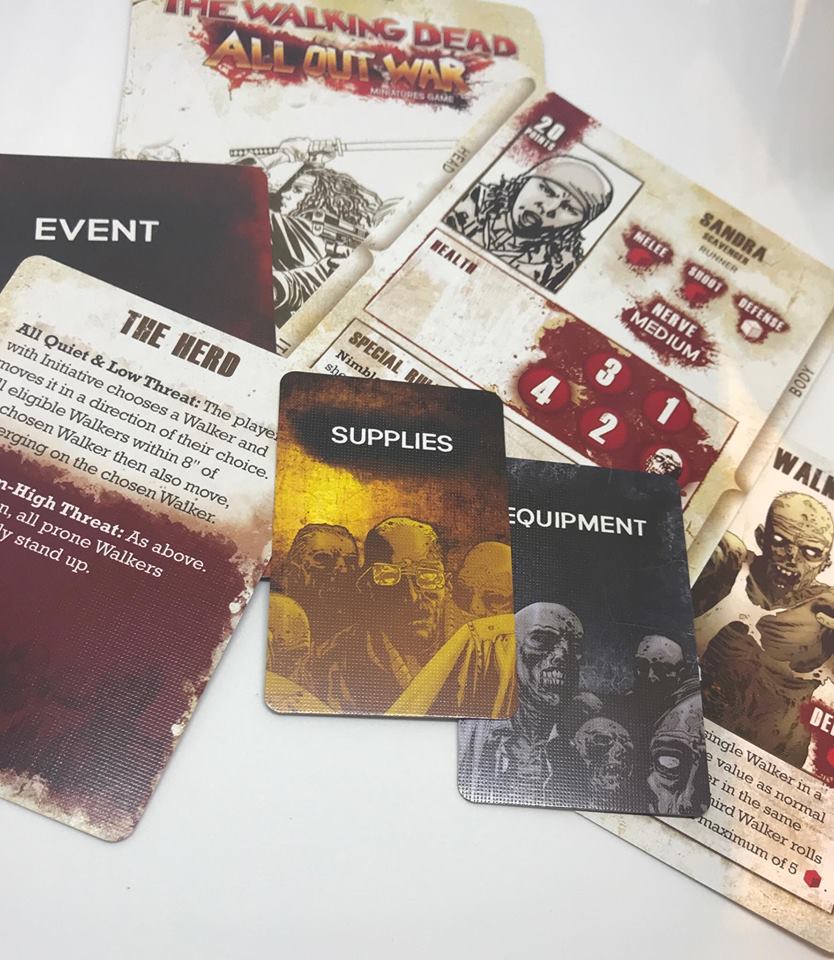 Extra scenarios can be found in the expansion sets which also include different characters, equipment, supplies, events and scenery to expand on the core set. In the Days Gone Bye expansion the narrative campaigns focus on recreating the story of the Atlanta group, from their humble beginnings to their foundation as a bunch of hard-edged survivors. And in the Miles Behind Us expansion pack the narrative campaigns focus on the Atlanta group’s early contact with the Greene family and their well stocked farm. All campaigns should be played in order (with some of them providing the option to play solo) however to complete all the campaigns in both expansion packs, you will also need to purchase additional characters in separate ‘Booster Packs’.

I had a lot of fun playing this game but I felt the artwork throughout the booklets and playing cards could have been given some more love. The colour palettes were a bit dull and some of the images on the components were a bit confusing. The generic scenarios in the core set are OK, but it is only when you have the expansions that you become really engaged and you feel more immersed into the storyline. It is fast-paced, entertaining, and you get to play with some of your favourite characters in the famous world of The Walking Dead. It is perfect for fans of the comic book and television series, and the instructions and rules ensure that it is easy to play and will suit any skill level.