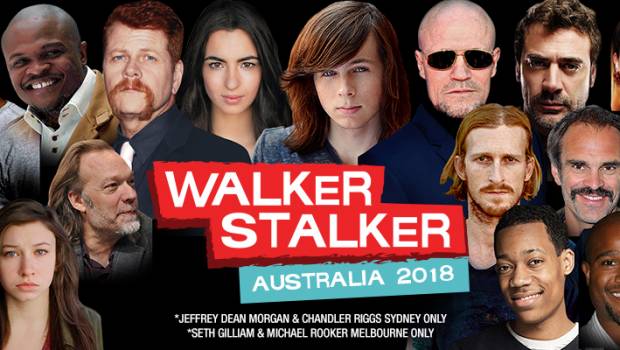 Continuing to deliver on its promise to provide fans with the ultimate experience, Frontier Touring are thrilled to announce that executive producer, director and special effects creator Greg Nicotero will be in attendance at Australia’s first ever Walker Stalker Conventions this coming February.

He will be joined on the all-star line-up by further exciting new additions Steven Ogg (‘Simon’), Pollyanna McIntosh (‘Jadis’), Tyler James Williams (‘Noah’) and IronE Singleton (‘T-Dog’) who are confirmed to join both the Sydney and Melbourne conventions, as well as Seth Gilliam (‘Father Gabriel’) in Melbourne.

These new additions will replace Norman Reedus, Christian Serratos and Cooper Andrews who regrettably are no longer able to attend Australia’s Walker Stalker Conventions due to unforeseen scheduling conflicts.

“I won’t be able to make WSC Australia. I tried and was really hoping to get there. We are starting filming for RIDE now and I promise that will be awesome. Sending good vibes to you Australia.” – Norman Reedus

“Unfortunately, Norman can no longer join us in Australia. We’ll miss him, but are so excited for a new season of RIDE. We wish him the best and understand that this time his day job has to come first” – Fan Fest

In additional line-up news, Chandler Riggs (‘Carl’) will now only be attending the Sydney event.

The addition of these new actors brings the total number of The Walking Dead stars attending Walker Stalker Australia to fourteen per city. All the following stars will pose for photos, sign autographs and participate in stage interviews:

In addition to meeting their favourite cast members, fans can also take part in a number of unique activities across the venue including:

PHOTO OP INFORMATION:
Photo opportunities for new guests go on sale 10am AEDT Thursday 25 January with all other photo ops on sale now!

Refunds for the cancelled artist photo ops will be automatically processed onto the credit card used for the original purchase within the next three business days. If you paid cash or EFTPOS at an outlet, please return to the same outlet to obtain a refund. We sincerely apologise to fans that are affected by the cancellations and wish the cast members all the best with their upcoming projects.