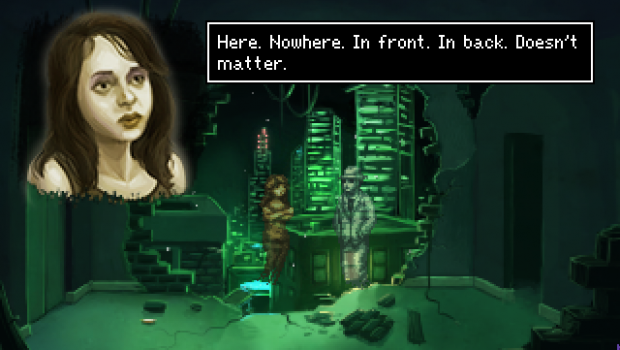 Spirit medium Rosa Blackwell and her guide Joey Mallone have rescued countless souls in these point-and-click mysteries — now can they save themselves?

NEW YORK – February 12, 2014 – When Rosangela Blackwell’s only living relative died, she inherited a troubling family legacy: the ability to see and communicate with recently deceased spirits. With this clairvoyance came the often painful responsibility of helping New York City’s lost souls accept their mortality and find peace. The friendship Rosa forged with her spirit guide, jazz-era spook Joey Mallone, may have helped ease the burden, but the weight of her gift has only grown over the years.

When The Blackwell Epiphany releases for PC this April, Rosa and Joey will face their toughest trial as the souls they’re trying to help are literally ripped apart before their eyes. Up against a force more powerful than any they’ve yet encountered, spirit and medium must fight for Joey’s soul and Rosa’s sanity in this provocative conclusion to the Blackwell indie adventure series. View the first trailer and screenshots at the official website: http://www.rosablackwell.com

The Blackwell games are old school point-and-click adventures from indie developer Dave Gilbert, who grew up playing Sierra’s Gabriel Knight games and reading New York crime writer Lawrence Block. Four installments have released for PC since 2006: The Blackwell Legacy, Blackwell Unbound, Blackwell Convergence, and Blackwell Deception. Though each game has its own self-contained story and investigative gameplay, the series has also followed Rosa’s transition from skeptical newbie to seasoned medium. The Blackwell Epiphany is likewise designed to stand on its own while providing bittersweet closure for players who have been with Rosa and Joey from the beginning.

“I always knew how Rosa and Joey’s story would end, but figuring out how to get there was a challenge. Every lesson I learned over the last eight years has been put to good use,” says series creator Dave Gilbert. “This is the last Blackwell game and we’ve given it our all — it’s longer, more detailed, darker, and more atmospheric than any of the games that came before it. I can’t think of a more worthy note to end on.”

Players who want to catch up on the series before The Blackwell Epiphany‘s April release can purchase the first four Blackwell games for PC in a bundle from Steam (http://store.steampowered.com/sub/13237) or GOG (http://www.gog.com/game/blackwell_bundle), or individually from the developer’s website (http://www.wadjeteyegames.com/games). The entire series is also coming soon to iPhone and iPad, starting with The Blackwell Legacy this spring.