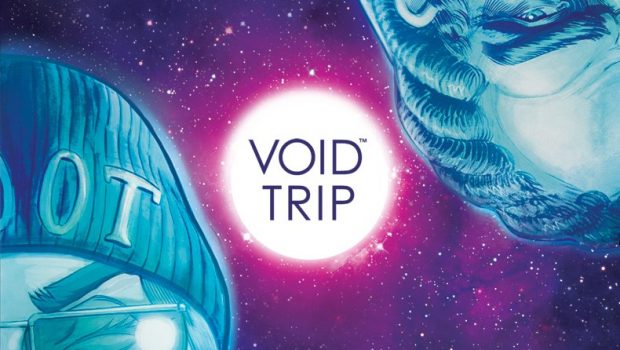 Impulse Gamer talks to Void Trip creators, Ryan O’Sullivan and Plaid Klaus about their new psychedelic science fiction series, coming from Image Comics in November. Void Trip follows the wild escapades of Gabe and Ana, the last two humans alive in the galaxy, who are journeying to the hippie-paradise planet of Euphoria. Wild shenanigans ensue, as this ragtag duo wrangles their way out of bad, funny and awkward situations and back on the road to freedom! Oh, and did I mention that the entire time they constantly chow on the hallucinogenic drug called space froot? It’s a helluva trip.

Here is the full interview with Ryan and Klaus, where they talk about these two unlikely heroes, their creative process, inspirations and how Void Trip came into being.

How did you come up with the idea for a psychedelic space adventure, and were these any particular inspirations for this story and the characters?

RYAN: The genesis of any idea is hard to nail down definitively. I know a bunch of different things led to Void Trip coalescing in my mind. Back when Klaus and I were working on our first book, Turncoat, I was reading a lot of American literature. Counter-culture writers like Kerouac, Bukowski, and Hunter S. Thompson. Calvinist/Gnostic writers like Melville, Hawthorne, and McCarthy. I felt like I was seeing two sides to America. The first being the carefree wild side. America as the old west, the land of opportunity. Pure individualism. And the second? The second side was this top-down controlling Old Testament/Calvinist side that put America First. Pure collectivism. The mixture of living free, in a country built upon principles of control. That weird contrast that defined so much of America. The more I thought about it, the more it seemed to define so much of life.

These were the ideas rolling around in my head at any rate. Void Trip came into being one random morning when I noticed one of Klaus’s daily warmup sketches on Facebook. It was an aging space hobo, holding up a cardboard sign trying to hitch-hike his way through space. Once I saw this character (who would later become Gabe, one of our leads) everything else fell together in my mind. 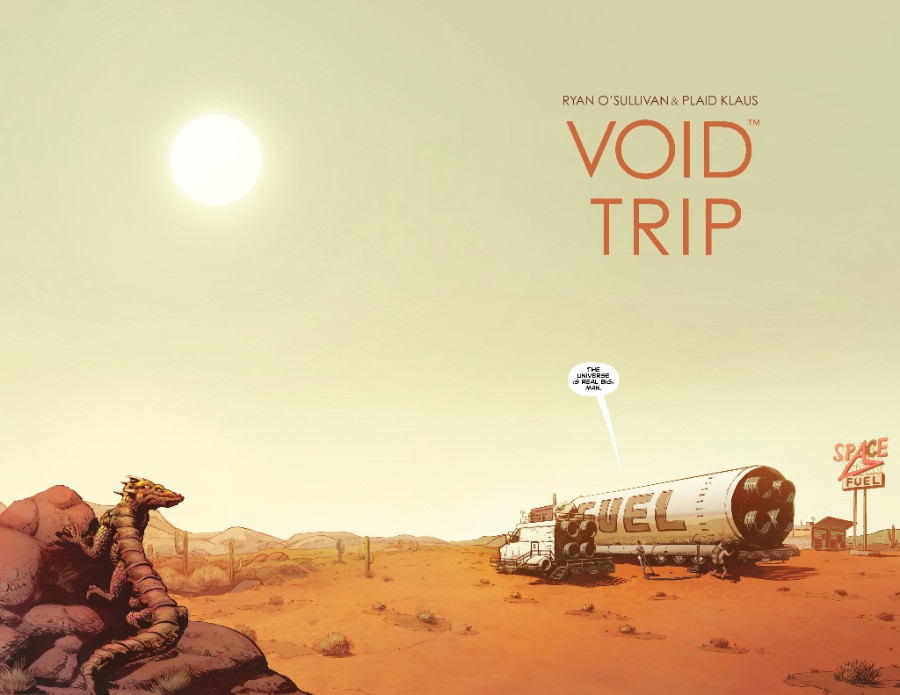 I love Ana and Gabe, and the dynamic that they have with one another. From the surface they appear like two fun-loving hippies, but I get the feeling it’s a little more complicated than this. Without revealing any spoilers, do they have a dark past that they’re running from, or are they really just two stoners bumbling through space?

RYAN: Thanks, I love Ana and Gabe too. They’re very much two sides to the same coin. Ana as the carefree takes-no-prisoners anarchist, whereas Gabe is the long-in-the-tooth aging hippie, who knows how to play the system to get what he wants. There’s a lot there to unpack. The idea of hope vs broken dreams, freedom vs co-existence. And yes, we do touch briefly on their backstory, but it’s not the focus. Void Trip is a road trip story. It’s a journey from point A to point B. If we talked too much about what happened before/after then the story would lack focus.

Sure, Ana and Gabe are the last two humans left alive. But do we ever explain what happens to the human race? Absolutely not. Why? Because it doesn’t matter. All that matters are these two cazy space hobos, drifting through the intergalactic highway, trying to answer the question of “*How can you be free in a universe which will always course-correct itself to limit you?”

I guess, in a way, the human race not being around anymore just emphasises that question being the core of Ana and Gabe’s existence. The human race was wiped out by an uncaring universe – how can you really live freely in a place like that?

Klaus, what has been the most rewarding part of working on Void Trip, and what part of this venture has personally given you the most satisfaction?

KLAUS: Having the chance to tell a story that really means something is the most rewarding aspect.  Void Trip walks the thin line between a coming of age story and a coming to terms story.  It’s about that existential wave that rolls into everyone’s life when you simply can’t run from your problems anymore.  When the bender has gone a little too long and you’re strung out.  That crushing blow when you realize the Universe is more powerful than your will. How do you face it?  How does an artist paint that emotional ride?

Considering the challenge at hand, the world building has been the most unique part of crafting this novel. Because the journey takes place in space, combined with lenses, I can take the reader anywhere. The setting opens me up to take advantage of any color palette, lighting conditions, and textural environments that I want.  From a visual literary point of view, I have this HUGE canvas and endless tubes of color.  The only limit is the imagination.

Whats not to love? 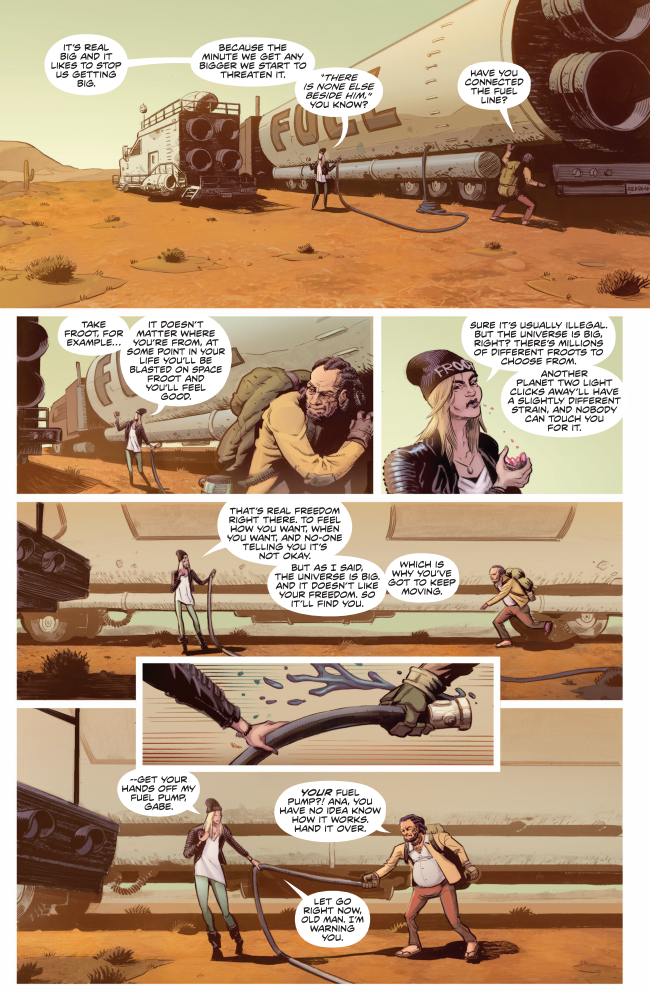 As an artist, how did you approach the psychedelic aspects of this story?

KLAUS: I use the psychedelic aspects in the book conceptually for narrative purposes, rather than a literal rendition of a trip. Ryan’s had the foresight to use the psychedelic “trips” as a literary tool to drive the message of the story, so I play more with the scenes from a visual symbolic level.  They’re sort of a blend of space, dreamlands and over-saturated hallucinations.

Did you encounter any difficulties when trying to visually capture the tone of the narrative and the nuances of these characters?

KLAUS: Art is always mentally demanding, but that is also what makes it exciting and worth the effort.  Each aspect to the story is a challenge; every scene is a problem to solve.  For instance, what tones and colors properly set the mood of a scene?  What shots provide the right sense of scale and object relationship?  How do we condense and distill the meaning of each panel into its simplest and purest form? How can we make sure those panels transition seamlessly to the reader.  It’s a juggling and balancing act simultaneously, because all those elements relate within a panel and every panel is reacting to the page as a whole.

I spend a ton of time in the thumbnailing stage. My sketches are communicated on toned paper so I can decide the light and shadow of the scene (as well as the solid black tones/lines).   Since I have the opportunity to do both the linework and coloring of my comics, this early stage planning may take longer, but it hepls to makes the story more cohesive in the long run. 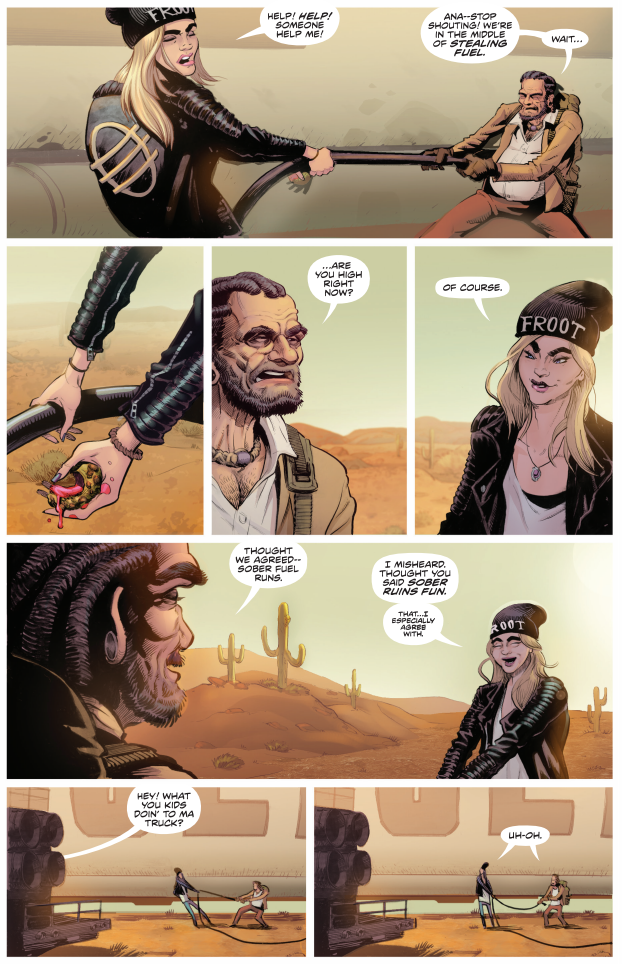 Ryan, do you find that writing comedy comes naturally to you?

RYAN: I’m an emotionally distant person. I put up a lot of shields. And I think when you do that you get used to relying on humour in order to get people to like you. (The alternative would be showing people the real you. And that’s far too scary.) I think a lot of this bleeds into my writing, which is probably why I tend to incorporate a lot of humour in my work. Dark humour, especially. It allows you to cover dark topics without being too preachy, and it also lets you not take yourself too seriously too.

Can you imagine taking life seriously? We grow up, lose our innocence, sacrifice play for survival, grow old, watch our parents die, watch our loved ones die, watch our own body slowly fall to pieces, and the last thing we see before the lights go out is a world that was nothing like we remember. A world so different, no thanks to us. In our dying moments we realise we were only ever a guest.  Why the fuck would anyone want to take this horrific thing called life *seriously*? Because we have fleeting moments of happiness amidst all of the suffering? I’m not convinced.

So yes. Comedy is the cure. Laugh into the void and this entire thing becomes much easier.

When writing this, did you encounter any difficulties when balancing the light and dark elements of this story?

RYAN: Klaus’s artwork lends itself to this sort of story. He has a very cartoony style, but in a nuanced way. There’s a lot of black in his work, a lot of darkness. Which is why you can go from a joke to genuine existential dread with nothing but a page-turn and it just works. There’s also a lot of beauty in his work, which helps to trick the reader with the art that life can be a beautiful thing. I couldn’t write this book with a different artist.

The dark scenes were easy enough to do. I care about the characters. I know where their story is going, I know the stakes. Making sure that the emotional payoff was earned and not reliant on storytelling tropes was the biggest challenge. There’s nothing worse than a story that assumes you care about its characters. You have to earn that. Make the readers care.

This links in with the biggest challenge with light scenes, too. You can’t use humour as a band aid. You can’t use humour to keep people entertained because the plot or the characters or the entire concept isn’t strong enough. Humour, for me at least, is just there as a tension release. Something that helps the reader avoid taking the story too seriously…apart from when they’re supposed to.

You have to be careful with humour, though. Modern comics have a bit of a problem with bathos right now. So many comics undermine their emotional moments in favour of an easy laugh. They don’t want to be seen as cheesy. The sad fact is this just means they’re not sincere. Which is a shame because sincerity, and the honesty it brings with it, is, in my mind the entire point of stories. 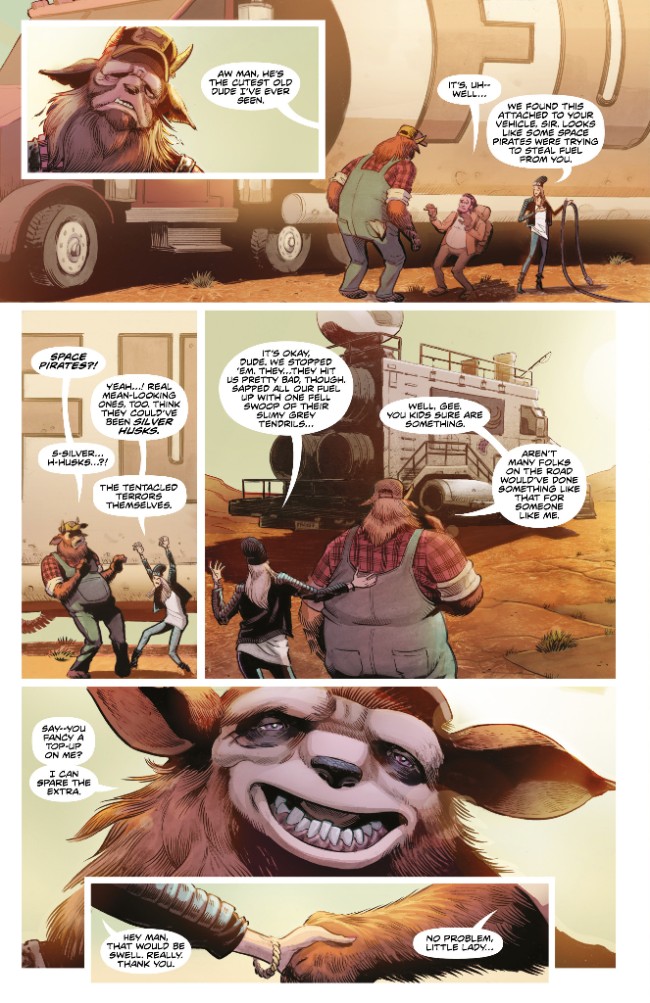 Klaus, can you describe your typical work routine – how often do you draw – how many hours per day?

KLAUS: I can’t, because I don’t have a typical daily work routine. However, I have developed my own production pipeline.  First I thumbnail the entire issue, doing a rough placement of the text boxes (to be sure it all reads properly). It’s in these planning stages that I also gather all photo references I’ll use (sometimes color palettes as well).  At this point the entire comic is essentially finished from a design perspective, the whole comic will read just as it should in the final book. The rest is just adding surface style.

However, before I render any pages, I’ll  send these thumbnails to Ryan for a pair of fresh eyes; at that time I’ll work on any edits he may have sent.  Once the thumbnails are completed, all the main problem solving has been completed.  So, next I hunker down and pencil/ink each page using the thumbs as guideposts. I work page to page in order, because I like to really feel the force of the narrative.  I feel jumping around will greatly take me out of the scene and I’d lose the visceral textures that make the world unique.

Once the inks are ready, I’ll hand the files over to my flat artist.  Then I break down the color palettes for each scene.  I gather as much color reference inspiration as necessary and alter the flats to my basic palettes. Then I color the first page of each scene to set the tone, finally I’ll fill in the remaining pages using the initial page as a guid post.

So on any given day I could be thumbnailing, drawing, inking, or coloring.  Always working, always. 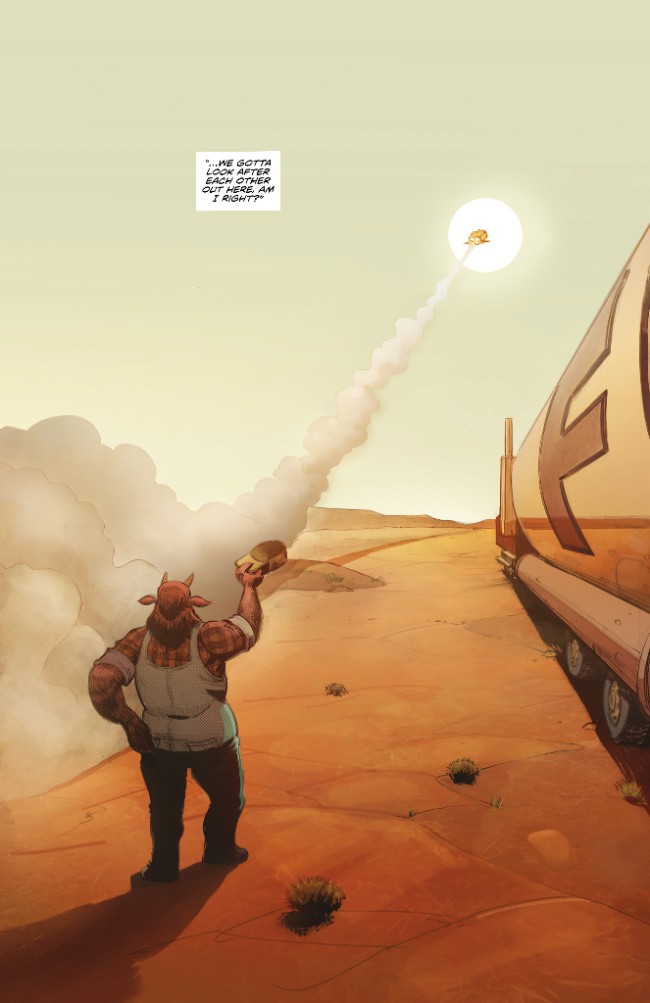 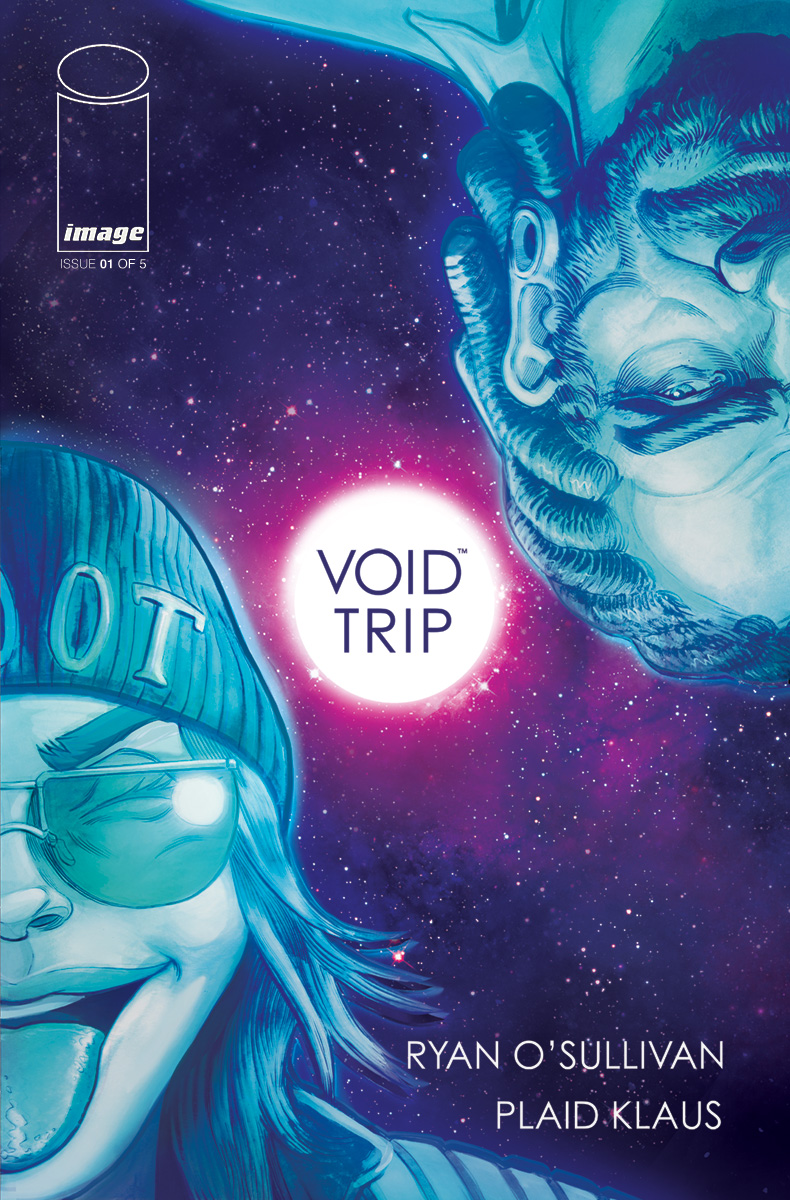