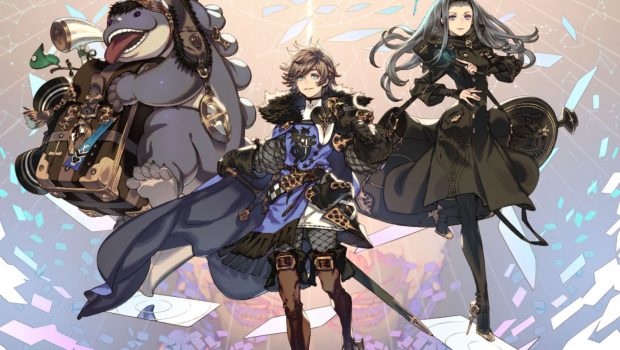 Square Enix Ltd.,  have announced that Voice of Cards: The Isle Dragon Roars, a unique new card-based RPG, will be available digitally for the Nintendo Switch™ system, PlayStation®4 computer entertainment system and PC via Steam® on October 28, 2021.

In Voice of Cards: The Isle Dragon Roars, players will venture through a story set long ago in a world shrouded in mystery, guided by the narrative voice of the Game Master (voiced in English by Todd Haberkorn). Set in a world of swords and sorcery, the game is told entirely through the medium of cards. Players will follow the protagonist as he sets off on a journey to defeat a recently reawakened Dragon, that is threatening the land and its people, in hopes of securing an immense reward. He is joined on his travels by his companions; Mar, a monster very attached to him, and Melanie, a black witch with a grudge against the Dragon. Players will need to make choices throughout the story, as well as join in turn-based field and dungeon battles that unfold on a board, in the manner of traditional tabletop RPGs.

Fans of the NieR series will also be able to enjoy theming their adventure by purchasing the special bundle set*, which includes the game, the Pixel Art Set DLC, and seven more DLCs themed after NieR Replicant™ ver.1.22474487139…:

*The items sold in this set will be available for individual purchase after the game releases.

Fans who pre-order the game will receive the “Golden Dragon Pattern” DLC, which swaps the reverse card design to an original design by Kimihiko Fujisaka as well as a “Traditional Avatar”, which allows them to change the design of the game piece on the field into a traditional craftwork.

Voice of Cards: The Isle Dragon Roars will be available digitally for the Nintendo Switch™ system, PlayStation®4 computer entertainment system and PC via Steam® on October 28, 2021.

For more information on the game, visit: https://voiceofcards.square-enix-games.com/