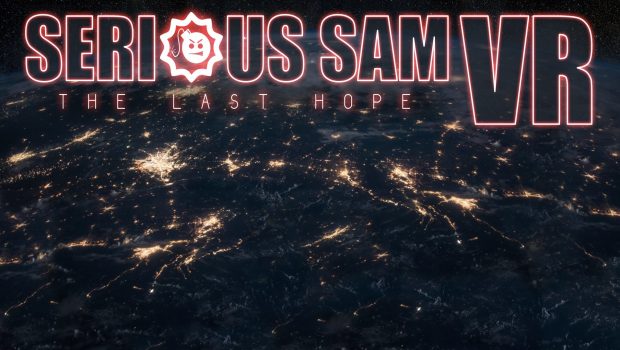 The Parking Lot Behind the Hooters Across the Street from the L.A. Convention Center – Sam Stone is back! And this time it’s real. Real developer Croteam and virtual publisher Devolver Digital announce Serious Sam VR, coming to a VR headset near you later this year.

It is the period of the first Mental War. Earth’s defense forces are crumbling under the hordes of the vicious Mental. He managed to break the will of many nations by destroying the ancient shrines of the domestic people. A fearless EDF general, Sam ‘Serious’ Stone, is leading the resistance from the battlecruiser ‘BC Saratoga’ in a desperate attempt to save the galaxy. And it’s all going down in the virtual realm.

For the first time, immerse yourself in the universe of Serious Sam – travel the galaxy, meet interesting aliens, and blow the shit out of them all in a mind-blowing, fast-paced, guns-blazin’ virtual reality environment. Get into the action immediately after choosing one of several missions, drop in and start wreckin’ faces. Featuring multiple levels on multiple planets, the bosses you’ll encounter in this virtual world are bigger, badder and uglier than you’ve yet encountered as Sam Stone. And the bigger they are, the harder they fall.

Mental’s hordes are about to unleash their fury on you from every direction – some of them are familiar, and others you’re going to wish you never met. Pick up and master new weapons or use trusty favorites (dual-wielding shotguns, anybody?) Serious Sam VR gives you a seemingly never ending supply of enemy-eviscerating weapons, and use your power ups to navigate your skill tree to be the boldest, biggest and most virtual Sam you can be. Customize or upgrade your gear on the Saratoga battlecruiser in-between missions using in-game currency that has nothing to do with real-world currency (sorry Fork Parker, no microtransactions.)

Get ready to strap it on, get in and get shooting. Serious Sam VR hits Early Access this summer.

To keep up with the spacegun collecting devs at Croteam, follow @Croteam. For the best baking recipes and knitting patters, follow @DevolverDigital.