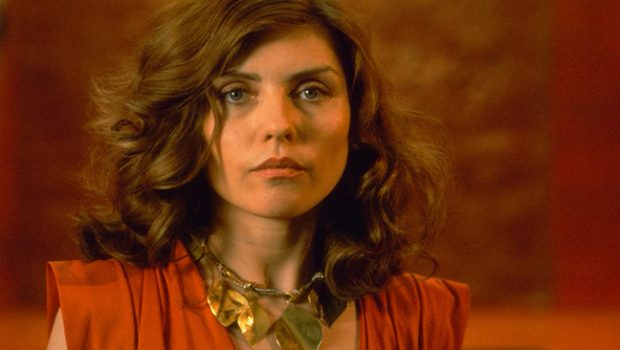 Summary: The paranoia and body horror of director David Cronenberg fuse in this classic 80s movie!

The 1980s were a boom time for horror. For every Friday the 13th, there was a Halloween sequel. The supernatural drama of The Fog is matched by the dreamlike madness of The Nightmare on Elm Street. Amityville, Antarctic bases, CHUDs, face huggers, gremlins and ghouls. While Freddy Krueger stalked our dreams, directors like David Cronenberg invaded our bodies, warped our perceptions, and generally undermined our collective sense of reality with movies like Videodrome.

James Woods is Max Renn, president of CIVIC-TV, a UHF television station. Ever on the search for the extreme, the weird and the downright crazy to draw an audience, Renn has a station technician, Harlan (Peter Dvorsky) scan the world for transmissions he can pirate and play on CIVIC-TV. Videodrome is one such programme, which appears to show the brutal torture and killing of unnamed victims. Convinced this the road to ratings glory, Renn orders Harlan to make copies of Videodrome, for re-broadcast.

After appearing on a late night talk show advocating for extreme television with psychiatrist Nicki (Deborah Harry in a not awful performance), Renn begins experiencing hallucinations. As the movie progresses, Renn’s hallucinations worsen, to the point where he can no longer distinguish reality from fantasy. When Niki goes missing (after vowing to find where Videodrome is shot), Renn hunts down Professor Brian O’Blivion, who also appeared on the talk show. And then things become seriously weird.

Cronenberg gained his reputation for cerebral gross out in early films such as Shivers (1975, Rabid (1977) and Scanners (1981). Videodrome was his leap into Hollywood, swiftly followed by such crazed classics as The Fly and Dead Ringers. An advance on those early shockers, Videodrome is a deeply disturbing movie that matches its weird vibe with graphic body horror and a political message that resonates today.

Videodrome’s aesthetic is one of sleaze and degradation. You only have to go into Renn’s dismal living quarters to understand this – walls festooned with posters (often of images that have been manipulated – witness Adolf Hitler in a ballerina’s tutu), fast good containers litter the floor, tables overflow with newspapers and other detritus, and aptly, there are video cassettes everywhere. In this early era of VHS and Betamax, Renn’s home matches the easy access to information, and the dissolution in standards it caused.

This aesthetic is matched in other aspects of Videodrome. Harry’s psychiatrist is a try-anything-once-type-of-gal, not averse to stubbing a cigarette out on her breast just for the thrill of it. And that’s before the audience sees physical objects begin to pulse with a life of their own, or when Renn develops a stomach wound that look suspiciously like a vagina which he uses to hide a pistol, and which others insert fleshy video tapes to brainwash him. The interaction of violence and erotica in Videodrome not only titillate the viewer, but also invite them to ponder their own reaction to it. What is a ‘safe’ amount of violence to watch? Just because we aren’t wielding the whip, doesn’t watching with anticipate make us complicit in the violence? Even if in the end you are disgusted by what you saw, you stayed to watch it, didn’t you?

Videodrome anticipates much of the social commentary around violence and entertainment that would erupt in the 1980s. Somehow miraculously escaping banning in any number of countries, Videodrome in its use of virtual reality, the discussion around the desensitizing aspects of violence-as-entertainment, how it predicts the paranoia and conspiracy theories that dominate discussion today, is years ahead of its time.

It’s no surprise that the idea behind Videodrome is a right-wing fueled nightmare – using the signal to cause fatal brain tumors to develop in people who’ve fallen through the cracks of society – the homeless, the drug users, the dregs and fringe elements who need to die. Professor O’Blivion found out the truth, and was killed for it – but before he died, he recorded thousands of hours of interview with himself, giving himself strange half-life where his recorded appearances soon take on the feeling of a live interaction. And these aren’t Videodrome’s strangest moments.

Couple the feel and tone of the movie with some of the most arresting imagery imaginable (the effects team did sterling work bringing Cronenberg’s vision to life – Renn ‘merging’ with his television, gross out body horror that has a political statement to make, and the deeply upsetting rust coloured set on which Videodrome is shot) Videodrome is a movie that not only entertains (and thus marks us out for death as the homeless people ultimately targeted by the people behind Videodrome are marked for death) but invites us into a weird and wild world where television is reality, and reality is television… 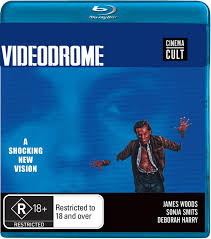