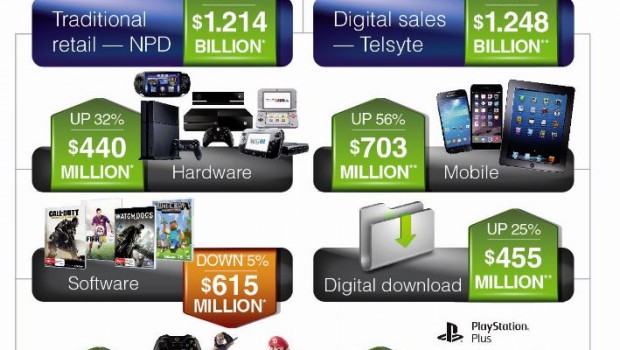 Sydney, Australia – 4 March 2015 – Australia’s video and computer games industry had a very strong year in 2014, hitting $2.46 billion, an increase of 20 per cent over 2013. According to research released by the Interactive Games & Entertainment Association (IGEA), the industry saw a total of $1.214 billion in traditional retail sales, up 7 per cent on 2013, along with $1.248 billion in digital sales, a jump of 39 per cent over last year

Market data from NPD Group Australia reveals that the primary area for growth in retail sales was in console hardware, which grew by a massive 47 per cent off the back of striGEA announces 2014 sales figures for Australian gaming industryong PS4, Xbox One, and Wii U sales. 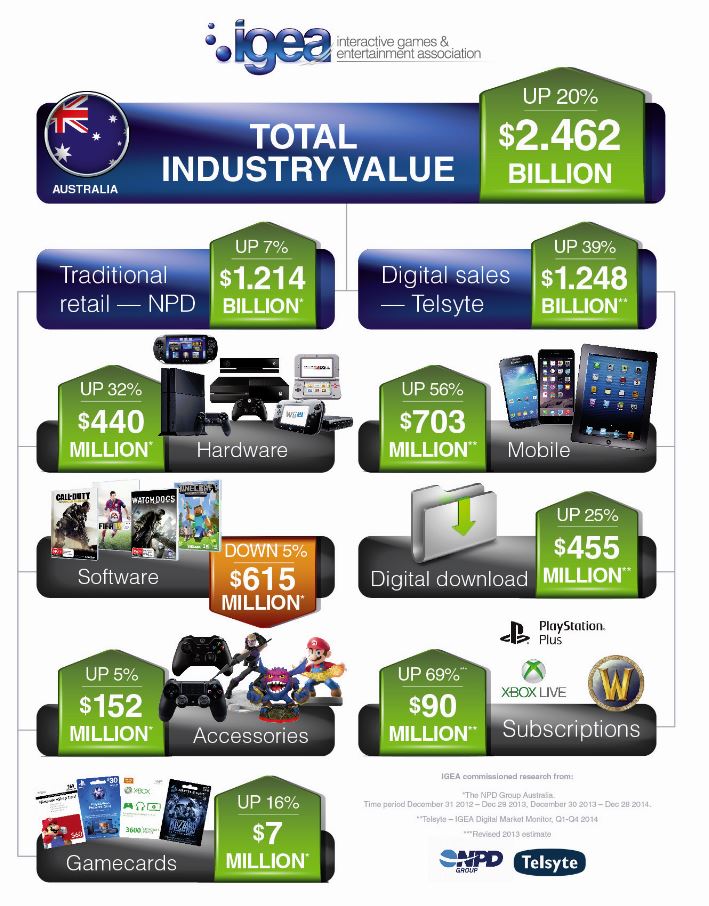 Additional research commissioned by IGEA from analyst firm Telsyte shows that mobile games, digital downloads and subscriptions have continued to grow significantly in 2014.

“The Australian video games industry is in great shape, led by next gen launches and growth in digital, according to our latest research. Platform holders, publishers and developers continue to see strong demand for their products and are positioning the industry for further growth into the future”, said IGEA’s CEO Ron Curry.

“Hardware sales pushed the industry forward in 2014,” said Curry. “Bricks and Mortar retailers have seen a boost in demand for the current generation consoles which in turn has lead to an increase in demand for new console software and accessories and items such as game cards. The tremendous growth in digital sales shows that publishers and developers are effectively catering to the purchasing habits of an increasingly connected customer base,” said Curry.

Much of the growth in digital has come from a 56 per cent jump year-on-year in mobile game downloads. More than half of all mobile app revenue in Australia is from games, of which the majority is generated through in-app purchases.

“The digital, subscription and mobile games market grew almost 40 per cent in 2014, and continues to be solid growth engine for the industry,” said Foad Fadaghi, Managing Director at Telsyte. “In 2014, a number of factors improved the mobile gaming experience, including larger screen smartphones, faster graphics processing and wider availability of premium games and titles. Clearly tablet and smartphone gaming has gone beyond being just a casual gaming platform”.

Since 2009 IGEA has provided a review of the state of the video games industry in Australia using commissioned research from NPD Group Australia. With the growth in digital sales, the NPD data has been augmented with research from Telsyte to provide a complete picture of the health of the industry.

•Growth has been driven by console hardware, which is up 47% on last year. In fact, the new consoles (PS4 and Xbox One) have had the best sales within the first 12 months of launch of any console hardware.

•Originally a digital only game, Minecraft had an extraordinary 2014, increasing in value by 114%, more than double it’s sales in the previous year. Not only was Minecraft well received by 8th Generation gamers, the purchase of Minecraft PC game cards at bricks and mortar stores also increased year on year.

•Action was the number one genre (volume)

•61% of all games sold (volume) received an unrestricted Classification

•The fastest growing segment is the online, in-game purchase market driven by adventure games, which have extra levels, missions campaigns and map packs.

To further supplement this market data, IGEA will be releasing it’s Digital Australia 2016 report (DA16) later this year, which presents data on the lifestyles, habits, attitudes and demographics of Australians who play computer and video games, as well as how Australians are consuming interactive games in conjunction with other digital technologies.