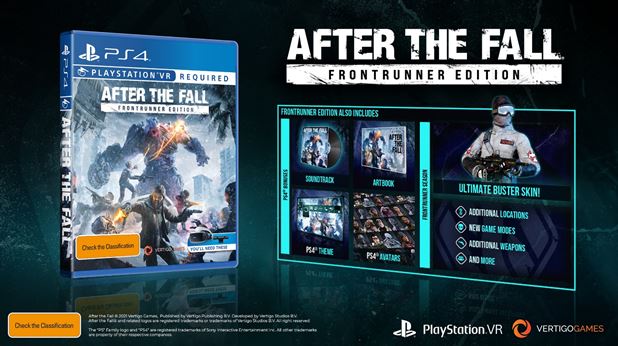 The After the Fall – Frontrunner Edition includes:

–       After the Fall Official Digital Soundtrack

With intense 4-player co-op and crossplay (PC, PlayStation VR and Quest 2) at its core, After the Fall offers action-packed co-op gameplay, built from the ground up for VR. Starting out in a shared space with up to 32 other players across all platforms, players venture out into the remains of post-apocalyptic LA in squads of four, wielding weapons with real-life movements. To stay ahead of their enemies, players scavenge undead-infested LA, with new discoveries lurking around every corner.

Developed by Vertigo Studios (Arizona Sunshine) and published by Vertigo Games, After the Fall – Launch Edition is now available on Quest 2, PlayStation and Steam, with a Deluxe Edition on PlayStation VR and Steam.

After the Fall – Frontrunner Edition will be available on PlayStation VR on March 25th, 2022.