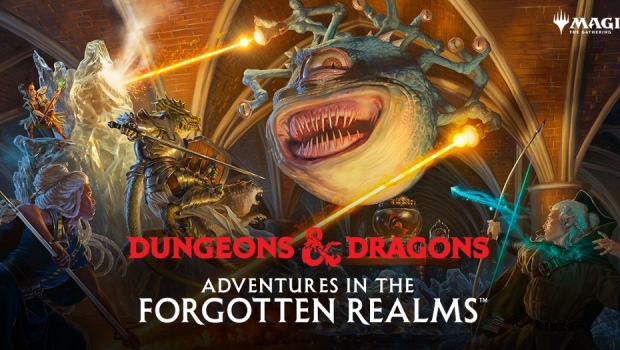 Venture into the dungeon with Magic: The Gathering Adventures in the Forgotten Realms

Wizards of the Coast today released Adventures In The Forgotten Realms, the latest set from the world’s oldest and best trading card game Magic: The Gathering (MTG) on MTG Arena and in-stores on 23 July. The first ever cross-branded set between MTG and the iconic tabletop role-playing game, Dungeons & Dragons (D&D), merges classic D&D monsters, spells and mechanics with MTG gameplay to create a brand new set that fans of both games will love.

Inspired by D&D’s deep lore, Adventures In The Forgotten Realms brings players to the region of Faerûn, filled with new lands to explore, treasure to collect and dungeons to conquer. Characters from the new set are inspired by well-known D&D characters and icons including the gnome bard Ellywick, the crime boss Beholder Xanathar, the Elder Dragon Tiamat, and many others.

With over 260 cards in the set, Adventures In The Forgotten Realms is the first set to utilise flavour words to illustrate the stories told by the creatures and spells of the world. New card prompts ensure all player choices have a unique flavour of their own, whether players choose which attack a creature uses or which action to make when playing an instant. In true D&D style, certain cards will also instruct players to roll a 20-sided die to determine the result of creature abilities and spells. The new element of unpredictability brought to MTG mechanics will encourage players to think outside the box and use random outcomes to their advantage.

Lastly, Adventures In The Forgotten Realms introduces the new Dungeon card type. When a spell or ability allows players to “venture into the dungeon”, they will embark on their own adventure and traverse through a dungeon of the player’s choice, activating room abilities to receive rewards and bonuses.

Thematically recognisable art styles can be found in Adventures In The Forgotten Realms boosters for certain lands and creatures. Limited land cards have alternate art styles reminiscent of classic D&D adventure modules such as the “Cave of the Frost Dragon” card. A selection of iconic creatures also have alternate art styles depicting their entries in the older versions of the D&D Monster Manual such as in the card “Baleful Beholder”.

Adventures In The Forgotten Realms is available in Set Boosters, Draft Boosters and Collector Boosters, with each pack containing its own unique selection of rare or mythic rare cards, tokens and art cards. Commander decks featuring cards from the new set will also be available from 23 July.

For more information on Adventures In The Forgotten Realms, visit https://magic.wizards.com/en/products/forgotten-realms or watch Wizard’s YouTube series on the new set here.