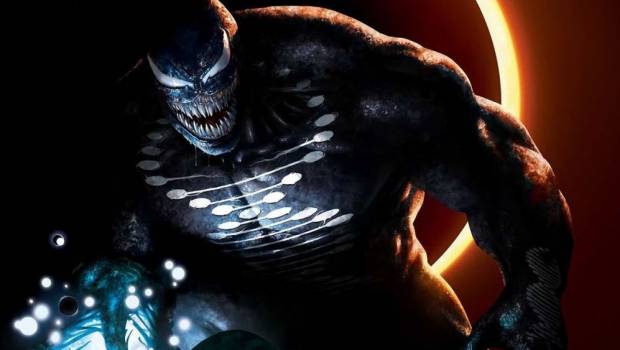 Writer Adam Warren utilizes a decidedly irreverent and fun tone throughout most of the issue to catalog 1.8 trillion years of Venom’s life spanning from Venom’s first bond with Eddie Brock and all the way through to the final extinction of biological life in the universe. The entire story plays out like a wacky documentary where the narrator is constantly breaking the fourth wall to speak directly with the reader. Warren tackles high-concept science fiction ideas with relative ease and keeps the story moving at a brisk pace, never allowing himself to get bogged down. It ultimately makes for an incredibly fun issue that (much like the titular character) had me grinning throughout.

While reading the story, it’s interesting how the madcap tone Warren establishes for much of the story helps to elevate the rarer, more heartfelt moments. Venom’s attempts to keep his one true love, Eddie Brock, alive are both touching and horrifying in equal measure. Lines like “Under time’s crushing pressure, Eddie decayed into a dwindling husk propped up by the symbiote’s cellular bioscaffolding” are so beautifully evocative. It’s the juxtaposition of scenes like this with the rest of the issue which really brings out the desired emotions for the reader.

Jeffrey “Chamba” Cruz and the rest of the art team play a huge role in how the issue transmits its tone. Chamba uses a variety of different page layouts to keep the story moving at a quick pace. Every turn of the page reveals a fun new adventure for the reader’s eye. Recurring artistic devices like “Time’s Arrow” and the “Host Compatibility Rating” fall right in line with the tone of the writing, creating a cohesive package. That cohesiveness applies to the aforementioned heartfelt moments as well. Eddie Brock’s extended decay is heartbreaking. Chamba’s artwork really conveys the emotions of a man literally held together by his symbiotic partner, as well as Venom’s dismay at watching all of his best efforts ultimately fail.

Along with the page structure and emotion that the art team is able to bring to the table, there are so many crazy designs in the issue. I loved looking at the Venom-ized neurons, Eddie Brock’s Venom-tainted false memories, and the Jack Kirby-inspired designs for the robotic Godminds. Chamba does a great job at slapping the iconic teeth and tongue combo on a number of different characters and making them all look unique and fun.

Venom: The End is so much fun in both the tone of its words and artwork. It takes the ideas of Venom, artificial intelligence, and biolife all to their logical end and plays out in fascinating ways. If you’re looking for a zany, imaginative, science fiction tale, look no further.