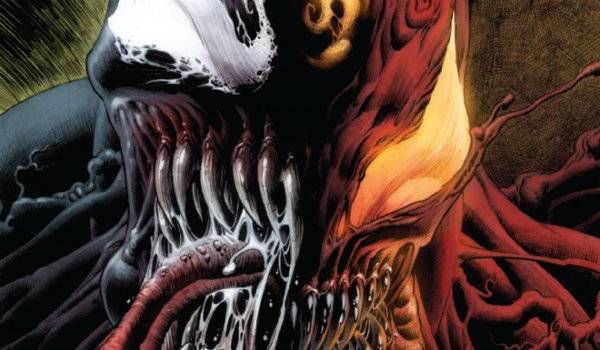 Summary: While not the best issue, it does allow the Carnage storyline to end and the Dylan story to begin. Let’s see whether Cates can stick the landing with the kid.

The Story: The Maker is stopped, Eddie reunites with his son Dylan, and I hate Carnage.

Background: I HATE Carnage (but we’ll get to that.)

Summary: Carnage has died (again) and the Maker continues to evaluate Dylan. Something just isn’t right with the kid. He is exhibiting powers he should not have. Theorizing it may have something to do with the Codex’s that come from the symbiotes, The Maker concludes that Dylan’s abilities show that the symbiotes have even greater defensive powers that have yet to develop. The Venom symbiote CREATED Dylan, but for what purpose?

Meanwhile, Brock and the Avengers are cleaning up the mess and Brock reunites with his son.

Back to The Maker, it’s revealed that he has the original symbiote from the Ultimate Universe with him (which is a major issue I’ll get to later.) The issue ends with the reveal that The Maker has been talking to the Council of Reeds and they ask him to bring the symbiote with him and that they plan to help him restore the Ultimate Universe (which is another bone of contention.)

Final call: Let’s break this down bit by bit.

I have loved Donny Cate’s run on this title. Donny knows what makes Eddie Brock and Venom tick. The art has been consistently good and the story has always twisted into a different direction that seems unknown and welcome. Now we come to the awful part.

I know that Carnage and Venom are inextricably linked, but I hate Carnage. Carnage is a leftover vestige of the 90’s when everything had to be extreme and hardcore. We are all just lucky he doesn’t have pouches. He is a one note villain. Everything he does and says is always “Kill, kill, kill, Venom, Parker, kill.” Maximum Carnage was a terrible story (and even worse game) and I really wish people would stop using Carnage as a crutch. It’s OK to reuse villains, but I wish these villains wouldn’t be so one note.

Then there is the part with the Ultimate Symbiote. Unless it turns into a retcon, that symbiote wasn’t really a symbiote. It was something of a liquid smart suit that Peter’s father made that ended up attached to Eddie Brock and gained sentience. It was never meant to be part of the hive that is Knull. How he plans on reconciling this idea is beyond me.

Also, we’ve seen that the Ultimate Universe has already been reborn, it’s just that everybody who knew about it previously thinks it’s gone. So how do the Council of Reeds, probably the smartest group of people in the Multiverse, not know that it exists? Is Marvel planning on retconning that as well?

Now, back to the good parts! I new that Dylan wouldn’t be human. The timelines just did not match up. Dylan’s always been kind of an odd duck and since this issue has shown various powers. It’s going to be interesting to see whether his story climaxes at issue 25 or if it will go on.

While not the best issue, it does allow the Carnage storyline to end and the Dylan story to begin. Let’s see whether Cates can stick the landing with the kid.