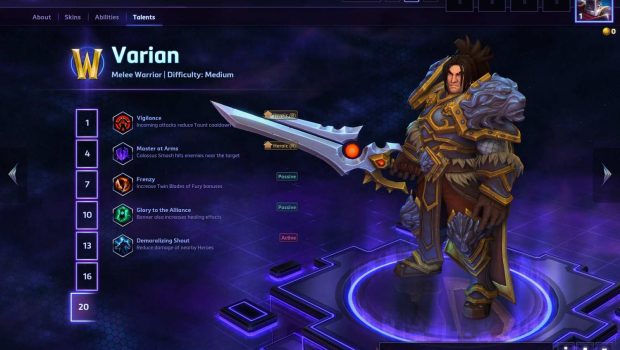 Varian Now Available in Heroes of the Storm; Earn Genji’s Oni Skin with the Nexus Challenge!

World of Warcraft’s High King of the Alliance, Varian Wyrnn, is the newest character to join the ever-expanding Heroes of the Storm roster! Celebrated for his ferocity, he is also the game’s first Multi-Class hero, and allows players to choose the most appropriate skills and playstyle for the given fight; protecting allies by tanking enemy damage, or unleashing brutal attacks as a melee assassin. Varian’s basic abilities include: Lion‘s Fang, a shockwave that travels in a straight line, dealing damage and slowing enemies by 30% for 1.5 seconds; Parry, which blocks all incoming basic attacks for 1.25 seconds, ignoring 100% of the damage; and Charge, which allows Varian to advance toward an enemy target, dealing light damage while slowing their movement by 75% for one second.

Today also marks the launch of the Nexus Challenge! Starting immediately, and running until January 4, 2017, players can earn in-game items for both Heroes of the Storm and Overwatch by taking part in Heroes matches with friends in Co-op vs. AI, Quick Match, Unranked Draft, or Ranked modes. Completing 15 games in Heroes of the Storm automatically unlocks tank character, Zarya, and an Oni Genji Portrait, as well as an Overwatch Oni Genji skin, portrait, and spray. Completing a total of 30 games further rewards players by permanently unlocking Auriel, Greymane, Kerrigan, and Li-Ming in Heroes of the Storm, as well as an Orochi Hovercycle Mount and 30-Day Stimpack.

Players in Australia and New Zealand that are looking for people to play Heroes of the Storm with are able to utilise the newly launched Heroes of the Storm: Looking for More website! It’s an easy-to-use and convenient way to find other players, make new friends, craft the perfect group composition, and find likeminded players who are available when you want to play.