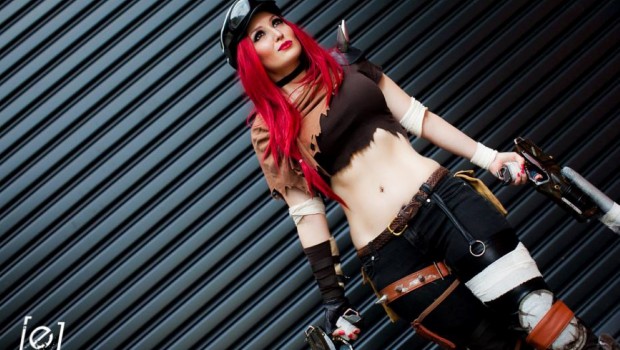 Welcome to Impulse Gamer Variable… so how did you come up with the name Variable?

It was actually a bit of an unfortunate accidental in-joke after a friend mispronounced “Varia” and it stuck. It seemed to be a good fit for a nerdy chameleon like me.

So what does cosplay mean to you?

For me cosplay is about bringing the characters I love to life and fuelling my creativity plus the opportunity to share those interests with others. I’ve met a lot of new friends through cosplay and its become a really big part of my social life that includes work-shopping and cosplaying together as a group.

Besides cosplaying, what else does Variable get up too?

I work full-time at my day job, so that keeps me busy most of the time. In my free time outside of cosplay I’m also a hopeless movie buff, gamer and I’m hoping to get back into gymnastics when the universe allows it. 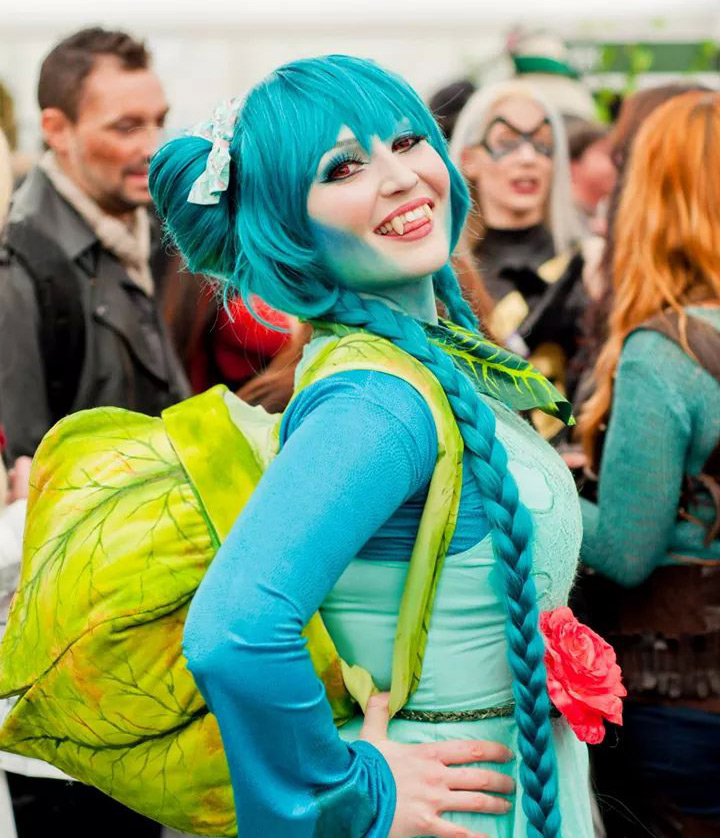 There’s been some criticism that cosplay has become a little too commercial over the years, what are your thoughts about this?

I’m not sure it’s “commercial” per se but there has definitely been a shift in the last few years towards “like-hunting” with a lot of people chasing “cosplay fame” as its become more mainstream. It doesn’t really affect me personally as it doesn’t stop me from doing what I do and enjoying it but I can understand how it might be off-putting for those who aren’t as familiar with the community. 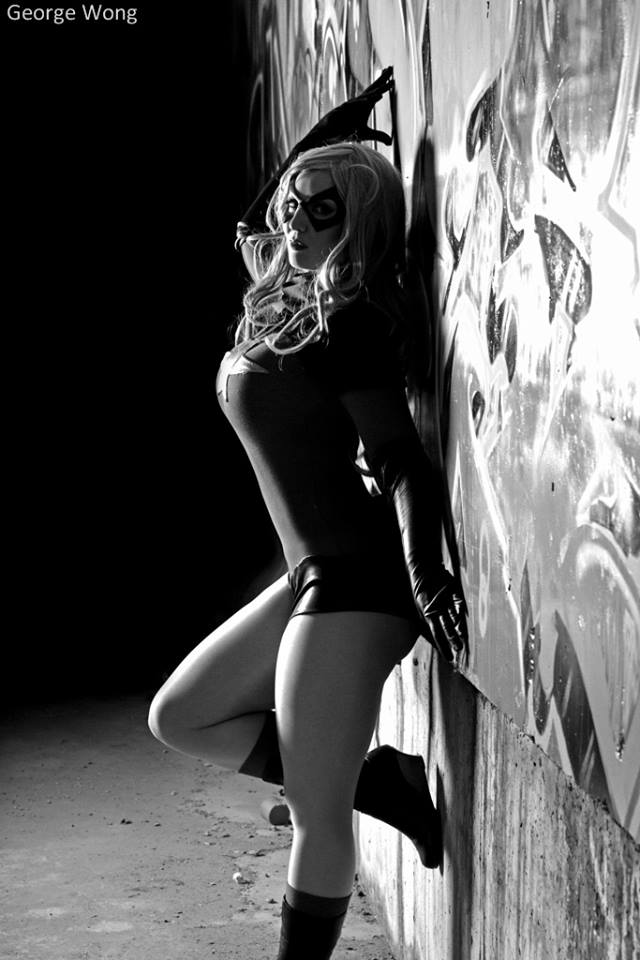 To me cosplay at its core is about having a personal relationship with the characters and series we love and want to represent and about each individual’s passion to creatively turn that unique relationship into a unique costume that’s truly their own. I don’t think that sentimental investment can ever be lost from the community without cosplay itself being lost.

Can you tell us when you first started to cosplay and who was your first character?

It’s hard to answer. My very first costume was Lara Croft’s jungle suit for an event in 1999 but I hadn’t heard of cosplay at that point, so I’m never quite sure if it really counts. I didn’t learn what cosplay was until a number of years later and realised that there was a name for what I’d been doing. 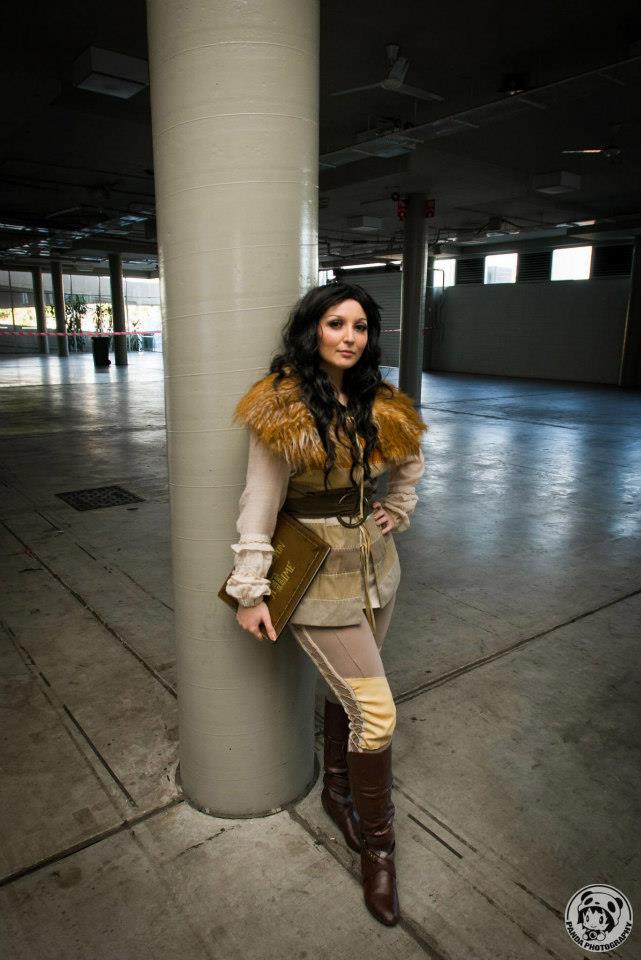 You’ve played a variety of characters from movies to comics, who has been your favourite character and why?

I like different costumes for different reasons and my favourites are constantly changing as I make new ones. There are some that I really love because I’m proud of a specific part that I think I made well and others I have a wonderful memory attached to. More recently my favourite is probably my Gijinka Bulbasaur, as it was a chance to make something very original and represent my favourite starter Pokémon. It’s always special making and wearing a character that has nostalgia attached to it.

What was the most difficult costume that you’ve ever created?

It would definitely be my Samus Varia suit which I started it a number of years ago and I’ve scrapped and remade it several times since then. It’s still incomplete and I really look forward to the day when I finally happily finish it. Countless hours and a depressing amount of money has gone into the project already but I refuse to admit defeat.

If you had unlimited budget, which character would you love to create?

I’m a hopeless fan of the Alien series, so my number one pipe dream is to make a 1:1 animatronic costume version of the queen from Aliens. Hopefully one day the dream can come true! 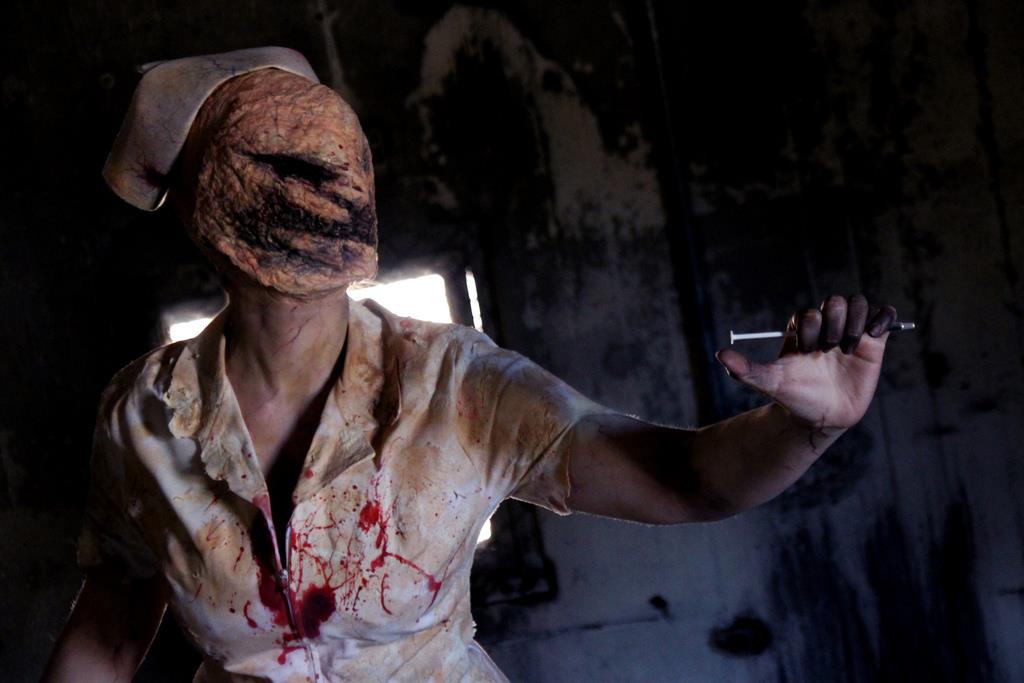 Can you let us in on a few of the characters that you might play this year?

I already have a long list of costumes to try and finish for this year and a few of them are for secret projects but I can tell you some of the costumes that I’ve already started and currently working on are Charmander, Battle-mage Elsa, Ravager, Nightwing, a Khajiit, Calhoun from Wreck-It Ralph, Bee from Bee & Puppycat and more Power Girl variations.

We’ve heard you’re a Power Girl fan, what was it like dressing up as Kara Zor-L (aka Karen Starr)?

Cosplaying as Power Girl can be a very dividing experience. On one hand, capes are a bit of a hazard (everything in The Incredibles was true), and Power Girl seems to be a magnet for uninvited perverted behaviour at some events. Unwelcome sexual comments and physical contact make me really uncomfortable and I’ve even been tackled to the ground by complete strangers more than once while dressed as her. 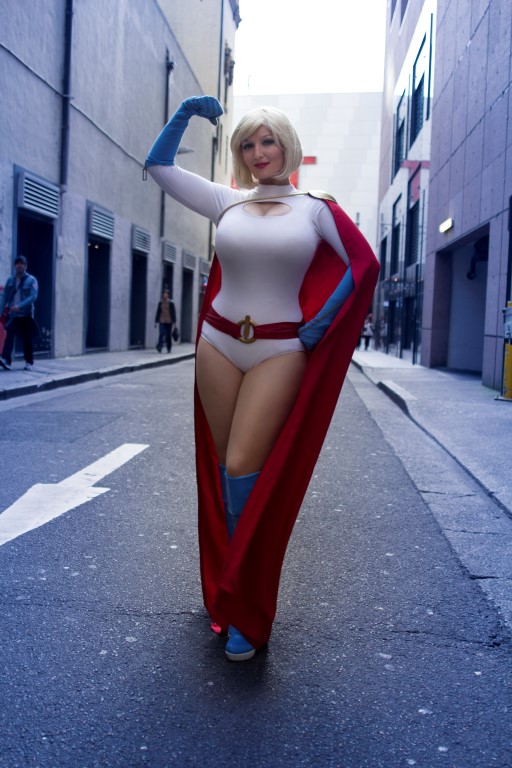 On the other hand, Kara Zor-L is one of my favourite heroines, so I don’t want to stop cosplaying her because of the behaviour of others. She has been such an inspiration to me during tough times and I’ve had some of my most treasured convention experiences on days when I was dressed as her. While I was in the USA I received an impromptu running-hug from a very small “Batman in training” and we got photos together. I also had the pleasure of meeting the artist whose work inspired my costume specifically, Amanda Connors.

She signed my pauldron as “her” Power Girl and it has become one of my greatest treasures. Some of the highest compliments I’ve ever received have been when other fans come up to me and call me “the real Power Girl”,and tell me that I’ve brought “their” Power Girl to life. I really hope that every time I put on that costume, I can bring as much hope and strength to others as she has brought to me and that I will do her justice.

Marvel vs DC… do you have a favourite and if so why?

I don’t – I like them because they’re different and I have favourite characters, artists and writers from each. If I had to choose one comic company apart from all others, it would probably be Image. My dad worked on Spawn while I was growing up and it was one of the first series I collected, so it holds a special place for me.

You’ve been to a plethora of different cons, what have been your highlights?

Too many to mention!

Going to Dragon*Con in Atlanta was one for the bucket list and I’m so happy I was able to share the adventure with some of my closest friends. Every day was full of new experiences and I saw some truly spectacular costumes. I’ve honestly never been to another convention like it and it’s become my personal favourite.

On home soil, last year I judged at The Kingdom of Ironfest with Predatorette and the late Justin Acharacter, my “Cosplay Dad”. It was such an honour to be a part of the event and I treasure it for some of my fondest, funniest memories with one of my real life heroes.

Which cosplayer do you envy the most and why?

I look up to a lot of cosplayers for their skill sets and right now I’m looking to Kamui Cosplay’s armours for inspiration while I work on my costumes for this year. I wish I had half of her talent but I still have a lot of learning and practice to go before I reach that point.

Which con are you most looking forward to in Australia this year?

Either CozzieCon or Supanova Sydney. CozzieCon is a local convention in memorial of Justin Acharacter and at Supanova we’re organising a tribute weekend for both Justin and cause-player Paul Kerr of Gotham’s Finest Sydney. They are both legends and pinnacles of the Australian cosplay community who passed away recently, so it’s going to be a very unreal and emotional weekend having a Sydney Supanova without them their to guide us.

They’ve left some big boots to fill and they’re very greatly missed but they also have an amazing ability to bring people together – even from the other side – and we’re hoping to carry on the legacy they’ve left us, using our cosplay superpowers for good, and keeping the batsignal shining brightly.

Can you tell us a bit about the games that you’ve been playing so far this year?

The Forest is – above all else – an absolutely beautiful game. It’s an indie first person survival horror in which you’re trying to survive post plane-crash in a forest inhabited by angry cannibals. It’s still very buggy but it looks like a AAA game. I’ve spent a bit too much time distracted. ogling the gorgeous scenery, lost in the ambient audio tracks, only to be violently and unexpectedly set upon by the stuff of nightmares. 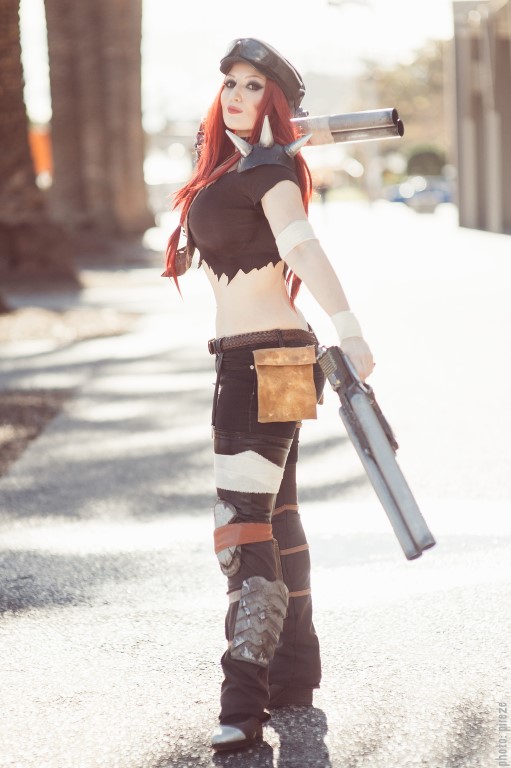 Far Sky is an indie first person survival game set underwater. It has a combination of exploration, base-building, harvesting resources and creating new items for either a sandbox mode or adventure mode (to find the parts of your damaged submarine, reconstruct it and return to the surface). The graphics might not be spectacular but I’ve found it very, very addictive.

Secrets of Grindea is a spiritual successor to the RPGs of old with solo and 4P multi-player co-op. It’s still a little buggy but the nostalgia-factor and the hilarious references more than makes up for it.

Don’t Starve Together is a multiplayer continuation from the survival game Don’t Starve, which I’m a big fan of and being able to play with friends makes a great game even better. Klei’s art style and quirky humour are what really make these games stand out. 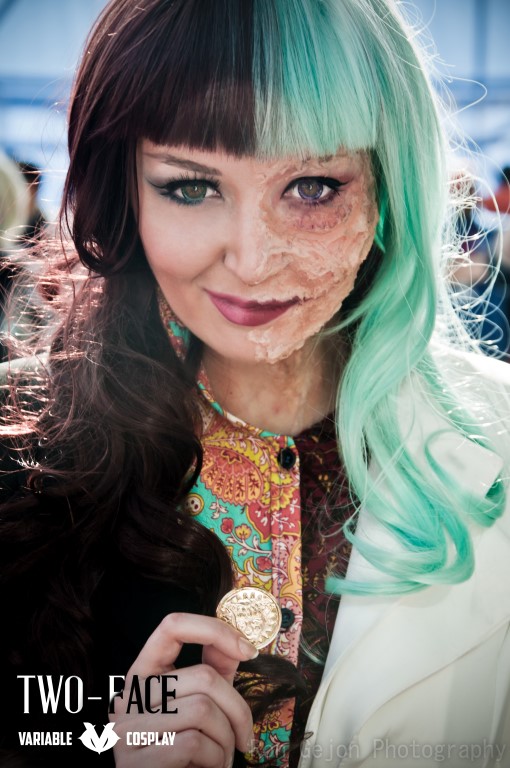 Alien: Isolation is a work of art. It’s a survival horror from the perspective of Ellen Ripley’s daughter, Amanda and in all honesty it’s one of the most stressful games I’ve played in a while but it’s also stunningly beautiful, ambient and cinematic. It’s definitely made for the fans, as it pays homage to the franchise and other works of Ridley Scott in some really beautiful and creative ways plus the xenomorph is truly its shining star.

What movie in 2015 are you looking forward to the most?

I don’t know if I can choose just one, there are a lot of really exciting-looking movies coming out this year. The fan favourites are definitely Jurassic World, The Avengers: Age of Ultron and Star Wars Ep VII: The Force Awakens but I’m also looking forward to seeing Tomorrowland, The Martian, and Chappie.

Thanks again Variable and have an amazing 2015 from all of us at Impulse Gamer!