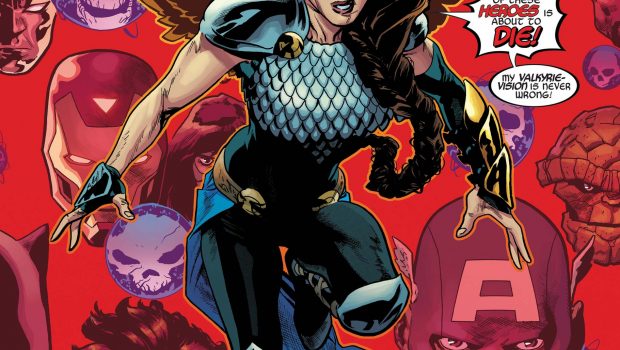 Summary: Jane Foster embraces her destiny. Horse's fight and a character is taken off the board pretty much forever. Ewing and Aaron are on a roll.

The Story: Jane makes a move to complete her destiny. Mephisto is hilarious and a character dies. Permanently.

Summary: The Grim Reaper (Simon’s brother) has stolen Doctor Strange’s soul and is intent on getting it to Valhalla to claim the power of the Valkyrie for himself. Reaper damages the all-weapon, which it turns out is the one thing that can REALLY hurt Jane. After all, the All-weapon is part of herself. Jane is mystified by who could be giving the reaper all of his power.

Kaecilius runs away, but before he does he clues Jane in on the fact that Mephisto is powering the Reaper (he sees Reaper’s black horse.) Dr. Riggs is not impressed by the new Valkyrie. She admonishes Jane for breaking Dragonfang and letting Bullseye steal it in the first place. Jane tells her Valkyrie is not her name… it’s her job. As she departs, the EMT (Halloran), tells Dr. Riggs about how Jane Foster saved her life in more ways then one. She then calls Damage Control for an atomic steed and takes off. Just as Reaper is about to reach Valhalla, Valkyrie stops him.

While the flying horses fight, Jane battles back and forth with the Reaper. Riggs and Halloran show up and give Jane the rousing speech and that’s when Jane gets an idea.  Grim reaper thinks he’s a hero… and where do all heroes end up?

Valhalla is where. As soon as he lands, he puts up a meager fight but eventually relents and is lead away by Skurge. Jane completes her mission and embraces her destiny by bringing a hero’s soul to Valhalla. Needless to say, Mephisto is not happy.

Jane returns Stephen’s soul to his body and he informs Jane that he knows who she is (thanks to the Eye of Agamotto) but promises to keep her life a secret.

Jane settles into her job at the morgue as the final page shows us Valkyrie flying on Mr. Horse.

Final call: Since this is the first issue of Valkyrie I’m reviewing, this must be said first: I LOVE MR. HORSE! The fact that that’s his name s great, but he’s basically and old Scottish-esc war horse. His fight with the dark steed is hilarious, with Mr. Horse giving off funny one-liners s (“Do tha like apples? THA LIKE THEM APPLES! BLOOD SCAB!”) as he kicks, while the dark horse is simply screaming “HELP! POLICE!”

As for the Grim Reaper, I’ve never really liked him as a character. My first experience with him was Captain America & The Avengers Arcade game where he was the easiest one to beat, and the only other real storyline I’ve read that was strictly about him is from Avengers Vol. 3 issues 11 and 12 when he temporarily brings a lot of Avengers back from the dead to fight the team. I do think he received a good send-off here though. He’s in Valhalla and while I don’t think he’s dead forever, it’s going to take some tricky writing to get him out.

Jane’s characterization is still spot on. She chose to inherit these powers, but that doesn’t mean she doesn’t want a normal life as well. She’s been banished to the morgue, there is a horse living in her apartment, and life is only getting crazier. I’m very happy to see that this book has made it past six issues and my hope is that it can make it past 12.