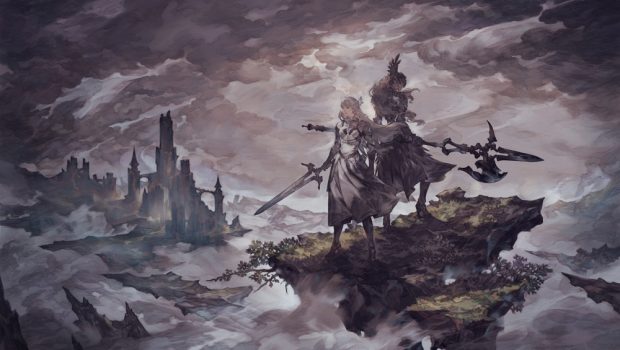 It has been over a decade since the last release in the Valkyrie Profile series, Square Enix’s oft-forgotten turn-based JRPG. With the release of Valkyrie Elysium, the series looks for a revitalization, trading in its turn-based battles for high-octane hack-and-slash combat. And while the new battle system mostly impresses, much of what made Valkyrie Profile a cult favorite is lost in the transition, leaving Elysium as a bland and expressionless experience. 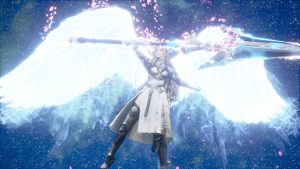 Valkyrie Elysium draws its plot from Norse mythology and follows Valkyrie, a vessel deployed by Odin the All-Father, to purify souls after suffering heavy injuries from a battle with the villainous Fenrir. While the source material is rich with the potential to create a meaningful tale, Elysium fails to weave an engaging story. Valkyrie is one of the dullest protagonists in recent memory, rarely having a thought for herself, and having little to no character arc. And while Valkyrie’s companions have more intriguing backstories, the plot never comes together in a cohesive or surprising way.

On her quest, Valkyrie will traverse linear levels, battle hordes of enemies, and slay intimidating bosses from a third-person perspective. But these levels often feel like a slog due to Elysium’s mundane presentation. From its beautiful yet empty hub world to the monotonous and interchangeable ruined cities, very few environments are memorable. Though Elysium’s world is supposed to take place in one decimated by war and death, it comes off as lifeless and serves more as empty linear corridors connecting one combat encounter to the other, registering as an outdated troupe of gaming generations past. And aside from some very light puzzles and collectible lore drops that have no other fiscal reward, there is nothing to do but battle enemies. All of this is a shame because Valkyrie Profile was a standout series in the 2000s due to its lore and strong world-building. And though Elysium never looks bad graphically, it pales compared to other PS4/PS5 titles.

Luckily, Elysium’s combat system is a success and kept me engaged despite the presentation’s shortcomings. Valkyrie has a wide array of melee attacks and play styles to experiment with depending on the type of weapon she wields. From standard swords that allow for quicker-paced combat, to lances for wider hitboxes, and heavy swords dealing slower yet more powerful hits, Valkyrie is malleable and formidable. The soul chain, a grappling power that pulls Valkyrie hastily toward an enemy, is a fantastic addition, allowing for delicious combos and impressive mobility options. 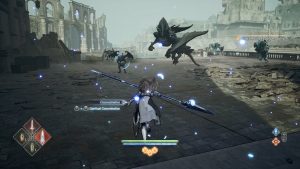 Enemies all have elemental weaknesses, for which Valkyrie has a plethora of powerful spells to dispatch. Whether it’s raining down bolts of lighting or incinerating foes in a firestorm, these spells all look great and are satisfying to deploy. As the game progresses, Valkyrie will also obtain summonable comrades called Einherjar, who also come with their own elemental affinities. The Einherjar will fight by Valkyrie’s side and are great for splitting the enemy’s attention while conjuring spells to target weak points. Enemies have an elemental weakness meter, which when filled, will cause the enemy to become stunned and drop gems when hit.

These gems are used to improve weapons and power up Valkyrie through her skill tree. The skill tree allows for enticing stat buffs, auto-summon abilities for the Einherjar, and new attacks. These attacks can be practiced immediately upon unlocking – much appreciated as new combos can often get lost in the shuffle of fast-paced action games. This upgrade system works great for the most part, though is slow to get off the ground due to a small selection of enhancements near the game’s start, and the other way to get gems: smashing boxes. Gems are obtained from defeating enemies, but can also be gathered from breaking every wooden object in Valkyrie’s path. As the game progresses the rarer gems are enemy-exclusive, but especially at the game’s outset, smashing boxes is equally as important as defeating enemies – a menial task for a divine entity serving Odin himself. 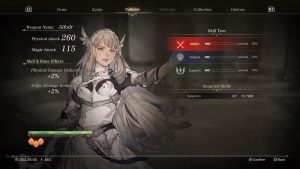 Camera issues also plague combat, specifically in corners of the battlefield. In moments where Valkyrie has her back up against the wall, the camera doesn’t quite know what to do and zooms in to the point where it’s difficult to see what Valkyrie is attacking or if she is even landing hits.

Exciting combat masks what Valkyrie Elysium is at its core – an underbaked and unremarkable attempt at a series revitalization that feels more like a PS3 game than a modern title. It’s fortunate the combat is strong enough to keep players engaged despite Elysium’s flaws, but not enough to recommend as a standout action RPG. 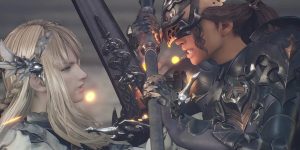