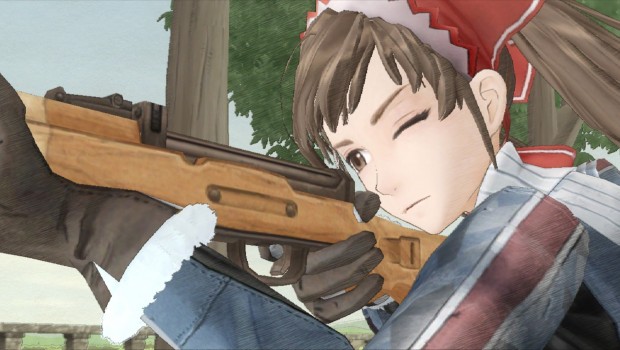 In the world of Valkyria Chronicles, the year is 1935 E.C., and the continent of Europa has been plunged into the Second Europan War between the Autocratic East Europan Imperial Alliance — also known as The Empire — and the Atlantic Federation over the precious resource Ragnite. The Empire is sweeping through the continent like an unchecked wildfire and has its eyes set on the rich Ragnite deposits of the Principality of Gallia. Although peaceful Gallia remains neutral in the conflict, its citizens will need to defend home and country against the inevitable invasion. Players follow Lieutenant Welkin Gunther and the vaunted Squad 7 of the Gallian Militia as they take on the seemingly insurmountable forces of the Empire.

• HD “CANVAS” Graphics Engine – The stunning, painterly graphics return, but this time in 1080p/60fps high definition quality! Battles and cutscenes are conveyed like a vibrant tapestry in motion.
• “BLiTZ” tactical battle system – Part overhead turn-based strategy, part RPG, and part real-time 3rd person shooter, the” BLiTZ” system is an innovative mechanic that makes battles simultaneously strategic and action-packed. Players will command and control their soldiers and tanks as they take on the Empire in 30 different battlefronts.
• Memorable storyline – Set against the backdrop of a world war, Gunther, Alicia, Largo and the rest of the fierce members of Squad 7 fight for personal reasons in the name of freedom, and the hope against all odds of liberating Gallia from Empire control, all in the face of the terrible realities of war.
• DLC Included – Besides the core game, Valkyria Chronicles HD includes all previously released DLC: Hard EX Mode, Edy’s Mission, Selvaria’s Mission, and Challenge of the Edy Detachment.

Buy the Europa Edition from 17th May 2016 at retailers.